Why Coke, Juicy Juice, Odwalla Are Taking a Walk in the Woods | Ad Age
Skip to main content
Sign In Register

Why Coke, Juicy Juice, Odwalla Are Taking a Walk in the Woods

Government Solutions Group Helps Cash-Strapped State Parks Hook Up With Corporate Sponsor Dollars
READ THIS NEXT
Dodge pays homage to history with EV logo
Odwalla started the Plant a Tree program three years ago, and through it has donated $350,000 worth of trees to state park systems across the country.
Credit:

NEW YORK (AdAge.com) -- Marketers are seeing the forest for the trees -- and finding a willing partner in a most unusual place: the woods.

To help them connect with consumers at the local level and at the same time align with environmental causes, brands such as Coca-Cola, North Face and Odwalla are hooking up with cash-strapped state parks, sponsoring playgrounds, reforestation efforts and maps.

The matchmaker? Government Solutions Group. "We essentially act as broker between state parks and corporations," said Shari Boyer, CEO of GSG. "The parks need funding and exposure, and brands need the visitors that the state parks represent," she said. Dealt a blow by the recession, "state parks are used to getting a budget from their state legislature that all they have to do is execute. But as those budgets decrease, they have to find smarter ways to do things," she said. "As you can imagine, parks' budgets are decimated right now. So when a brand steps in and helps, it becomes even more significant in this day and age."

People make 730 million annual visits to state parks, about two-and-a-half times as many visits as to national parks. State park visitors are "excellent consumers," Ms. Boyer said, and thus an attractive target for brands: They're highly educated, have high incomes and are very active. And "the parks are in every community, so for the marketer it means taking things to the local level" she said, noting, "engaging in a local cause enables [marketers] to engage their employees, as well."

The park setting can be uniquely conducive to brand building, she said. "It's a very quiet marketing environment, it's a great place to reach people; they're in the right state of mind," she said.

GSG offers two models for park-marketer collaboration: In the first, it creates visitor-information guides and pamphlets for the state park, paying for printing and distribution. Then it goes out and finds a sponsor for the materials. CSG gives 20% of any profit generated from the pieces back to the parks system. "So we take what essentially is a cost for the state parks and turn it into a revenue stream," Ms. Boyer said. A sponsorship will cost marketers about $200,000 a year for a "national buy" -- across about 1,200 state parks in 15 states currently covered by GSG, which publishes nearly 7 million promotional materials annually for the parks. 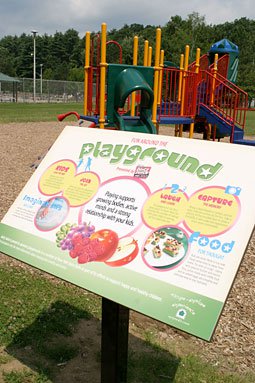 In the second model, GSG acts as a sort of marketing-services agency, developing customized programs for marketers and state parks. "We try to match what the corporation's trying to accomplish and what the state park needs," Ms. Boyer said. Nestle's Juicy Juice, for example, has sponsored permanent installations of playgrounds at seven New York state parks with a donation of $350,000 -- a price that's "less than a Super Bowl spot, and they're permanent. Not 30 seconds. And they're so uniquely targeted," Ms. Boyer said. "It gave Juicy Juice 'point-of-play' exposure with the target consumer at that location," she said.

"Partnering with the New York state parks really was a way to provide families with a fun and enjoyable play environment," said Elizabelle Marquez, Juicy Juice marketing manager. "Juicy Juice is all about helping Mom raise healthy, happy kids, and we think this is a really great fit from that perspective."

Another beverage marketer, Odwalla, started the Plant a Tree program three years ago, and through it has donated $350,000 worth of trees to state park systems across the country. Visitors to odwalla.com/plantatree could select where they wanted Odwalla to plant a tree for them, explained Faith White, brand activation manager, in an email.

Like Juicy Juice's, the program supported the brand message. "Odwalla partnered with the state park system on the Plant a Tree program because outdoor activities are very important to both our consumers and our employees," Ms. White said. "The Plant a Tree program allows us to support something we really believe in by helping maintain a healthy environment for generations to come. The Plant a Tree program also supports Odwalla's commitment to nourishing the body, mind and spirit. Thirty years ago, Odwalla began with a simple vision: make great juice, do good things for the community and build a business with heart. This program is just one of the many initiatives that allow us to continue recognizing that vision."

Coca-Cola, meanwhile, collaborated with Stater Bros. Supermarkets to sponsor "Reforest California," through which it asked consumers to help replant more than 1 million trees in California state parks burned by wildfires. "You really had a partnership between the brand, the retailer and the state parks" in that example, Ms. Boyer said. "And what was so critical about that program for Coca-Cola was not only did it get 150 million impressions of media, it also showed positive ROI on the program as well. It essentially showed that you can do the right thing, as well as drive your business. And that is the magic formula for a brand." Coca-Cola raised more than half a million dollars, at least half of which came from consumers. "So it's really Coke motivating the local community to give, rather than them giving on their own," she said.

"We decided we'd change our marketing budget and really go from event to cause, and in that we came up with the idea of 'million trees,'" said Terry Fitch, senior VP-general manger of West region for Coca-Cola.

The joint effort between consumers, Coca-Cola and its customer, Stater Bros., "was our first entree into cause marketing in supermarkets," Mr. Fitch said. "We followed that up with a beach cleanup for California beaches," he added, through which, with the participation of consumers as well as Stater Bros. and Coca-Cola employees -- a total of more than 700 people -- it was able to clean up 5 million feet of beach.

"It's all part of our 'Live Positively' campaign with Coca-Cola, and it's certainly given us that license around sustainability. Sustainability is our social license to interact with the private and public sector," he said, adding that as one of the world's largest companies, Coca-Cola has a responsibility to be the most sustainable.

What part of their budget are marketers pulling from to create these programs? It varies, Ms. Boyer said. "Sometimes it comes from the print budget, sometimes it doesn't," she said. "Most brands do it just generally through their marketing budget." GSG typically works directly with clients and not through their creative or media agencies. "This is just a little bit too out-of-the-box for the agency," Ms. Boyer said. "Sometimes the agency will get involved in doing the creative but we usually just deal directly with the marketer."

Although GSG has existed for seven years, "the openness to doing these sorts of partnerships has grown significantly in the past few years," Ms. Boyer said. "Parks are realizing there are ways to partner with corporations without compromising their policies, procedures, mission. In fact, what we're seeing is that it can enhance their mission by working with corporations. The trick is finding where the intersection is between brand desires and park needs."