NEW YORK (AdAge.com) -- Coca-Cola's Vitaminwater is a major marketing partner for the NCAA -- but its players shouldn't drink six of its varieties or they might test positive for banned substances. 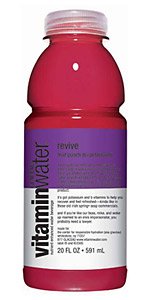 Revive is the only Vitaminwater flavor that is directly affiliated with the NCAA, and it does not contain banned or impermissible substances.
The news came to light today after an e-mail, purportedly from Drug Free Sport, an organization that conducts drug testing for NCAA schools, found its way into the inboxes of athletic directors around the country. Drug Free Sport denied sending the e-mail and referred calls to the NCAA.

In October, Coca-Cola inked a multiyear agreement to display Vitaminwater's Revive flavor on the sidelines during all college championship games. But only a month later, Vitaminwater was cited in a little-noted section on the NCAA website as producing six flavors containing banned or impermissible substances that could result in positive drug tests.

Latrice Sales, NCAA assistant director for health and safety, also addressed the availability of Vitaminwater at championships during a recent conference. A digest from that meeting states that an "aggressive educational effort will be necessary to help student-athletes understand that consuming some flavors of the drink could result in a positive drug test and the consequences that follow, including lost eligibility."

The Vitaminwater deal provides Revive as a beverage option to players and gives it a branded presence on coolers, cups and squeeze bottles. Marketing programs between NCAA and Vitaminwater are also a part of the deal, including marketing around the upcoming, high-profile Final Four and March Madness men's basketball tournaments. Coca-Cola is considered an NCAA "Corporate Champion," having signed an 11-year, $500 million deal in 2003.

Revive is the only flavor that is directly affiliated with the NCAA, and it does not contain banned or impermissible substances. Another eight flavors are available on a by-request basis to players. The NCAA website states the six flavors that include impermissible substances do not have a direct association with the NCAA, and in situations where they are displayed alongside NCAA-themed promotions a visible disclaimer will be provided.

"From the beginning of the partnership, we have worked closely to ensure that we met the NCAA rules on what student athletes can consume," said a spokesman for Vitaminwater. "NCAA has said member institutions may provide nine of 15 varieties of Vitaminwater."

Vitaminwater declined to provide further details on how it would handle the situation.