Project's Boons: More Shelf Space, Media Interest. Question Is Whether It Has Buoyed Sales
READ THIS NEXT
High-profile departures at General Mills and Ogilvy, and lessons from Peloton’s recall: Friday Wake-Up Call

NEW YORK (AdAge.com) -- Chances are you're aware of Pepsi Refresh Project and not just because you've read about it in these pages. It's likely you've been urged to vote for an idea by a friend on Facebook or that you've been surprised to discover your hometown vying for a grant.

And that's how Pepsi intended it since Refresh launched in January -- for consumers to raise awareness by activating their networks to vote for pet projects. Bottlers have helped stoke that activation, rallying their communities around local applicants and hosting parties to celebrate the winners, complete with giant, ceremonial checks and plenty of local news coverage. 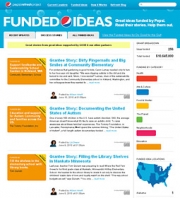 But has it buoyed sales? Refresh doesn't seem to have had a major influence on the brand's bottom line yet, with brand Pepsi's share falling 0.5% compared to a 0.3% decline for Coke in the first nine months of the year, according to Beverage Digest. Yet some bottlers say Refresh is a clear winner in terms of clout gained at the local level, the effort's grassroots nature having given them elevated status in their communities.

"We fight for floor space and locations in the stores, and this year I think we're getting better locations than our competitors. We're getting bigger displays, because [stores] are seeing that we're giving back to the community," said Pepsi bottler Dave Pederson, VP-soft drink sales at Bernick's Beverages and Vending in Minnesota. "I can't tell you what percent lift it's given us, but it's given us [an advantage]."

Moreover, Mr. Pederson said the campaign has given the bottler something to rally around. Bernick's has plastered the Refresh site, refresheverything.com, on as much collateral as possible, including the back of its trucks. It has also produced hats and T-shirts, hosted local events and promoted those vying for grants.

Executives at Bernick's, as well as bottlers around the country, have been interviewed repeatedly by local TV and radio stations about Refresh grant applicants and winners. Bernick's interaction with local media this year has easily exceeded what it would be in a typical year, Mr. Pederson said.

Ami Irazabal, marketing director at Pepsi, said that the company has worked with ABC on 38 local segments highlighting winners, while NBC has aired 108 such segments. Local news stories covering those applying for grants or winning grants are gravy.

"People have talked to their local newspaper or media to ask them to showcase the idea, to rally the community to support them," Ms. Irazabal said. That's another piece of media that's completely earned."

Not that it's all been a free ride. The company expects to spend enough on Pepsi marketing in 2010 to exceed spending in 2009. Last year, Pepsi spent $136 million on measured media, according to Kantar Media. Through August of this year, the brand has spent $109 million.

Measured media buys for this year have included TV on major broadcast and cable networks, such as NBC, ABC, Fox, MTV, Spike and ESPN, as well as ads in print publications like Parade and People. There has also been out of home, extensive digital buys, and Refresh has tapped into PepsiCo's existing relationships with the National Football League, Major League Baseball, Nascar and Major League Soccer.

Ms. Irazabal said the number of impressions achieved through earned media is among the highest the company has ever seen for a campaign. In total, Refresh has garnered more than 2.8 billion impressions from earned media through mid-October. So how does that measure up?

Pete Blackshaw, exec VP of NM Incite, a joint venture of Nielsen & McKinsey, called Pepsi's reported earned impressions "not an insignificant number. Relative to other viral campaigns I've studied, that's significantly higher." But he was also careful to point out that not all impressions are created equal. "Some would argue that a 30-second commercial has potential to penetrate a lot more than a quick, incidental reference on a blog post," he said. "A good Super Bowl commercial can create massive viral multiples. ... Nationwide claimed they got $20 million in earned media impressions off of the Kevin Federline commercial."

There appear to be plenty of impressions on the local level. This summer, for example, Avalon Educational Institute, a community center in Duluth, received a $25,000 grant to purchase equipment, including balance beams and floor mats. To celebrate, Bernick's hosted a cookout for the public, where it presented Avalon with its check. Certainly, Bernick's has hosted community events and free cookouts in the past, Mr. Pederson said, but they weren't typically covered by a local radio station for nearly three hours.

Bernick's has also worked with several local organizations seeking grants, including a local YMCA. The bottler partnered with the city of Duluth, Minn., to produce signage that was posted around town urging people to vote. The idea didn't garner enough votes to get funded, but Mr. Pederson said the effort still raised awareness both for the YMCA and for Pepsi.

"We're getting our logo out there, yes, but, more importantly we're building partnerships in the community," he said.

Through October, $11.7 million has funded 287 ideas, hailing from 203 cities in 42 states (see chart). More than 51 million votes have been cast for 7,000 projects. Most of the grants have gone to nonprofits like Avalon Educational Institute, but a significant portion have gone to individuals, with only a small percentage of the grants being awarded to businesses.

Refresh has also attracted consumers of all ages, with voters ranging in age from 13 to 61-plus. Interestingly, the largest swath of voters is between the ages of 41 and 60. Ms. Irazabal said that's because the larger nonprofits competing for funding tend to activate networks that include an older population. The projects seeking smaller amounts are driven by millennials, aged 17 to 27, who make up for the third largest group of voters, behind those aged 28 to 40.

Avi Dan, founder-president of marketing consultancy Avidan Strategies, said the beauty of this kind of campaign is its longevity. "It can pick up speed the longer it's out there and the more people discover it for themselves," he said. "Traditional campaigns in our culture tend to have a shorter life cycle, because people get tired of traditional campaigns a lot faster."

What Refresh has brought Pepsi

$50K: 89 projects
Examples: Preserve a local movie theater and revitalize our Main Street, Rosendale Theatre Collective; Save one of the nation's first Cub Scout camps from being shut down, Anthony DiNicola.