There's the Affordable Care Act. There's Obamacare. And then there's brosurance and hosurance.

The terms popped up this month as two Colorado nonprofits fired up a digital campaign called "Got Insurance?" to entice young people to sign up for health insurance. The ads, made in-house on a shoestring budget without an agency, feature actors who are friends and family of the nonprofits. Less than $5,000 was spent on the digital campaign. And its originators claim it's already gone viral.

The campaign obviously mirrors "Got Milk?" and features, among other things, frat boys, female best buddies, "hot to trot" couples emboldened by free birth control and a cardboard cutout of actor Ryan Gosling. "Brosurance" came from ProgressNow Colorado Education, which created the campaign along with Colorado Consumer Health Initiative. As of Nov. 12, #Brosurance, which rolled out in October, has popped up more than 6 million times on Twitter, while #GotInsurance has registered 1.7 million mentions, according to ProgressNow Colorado. 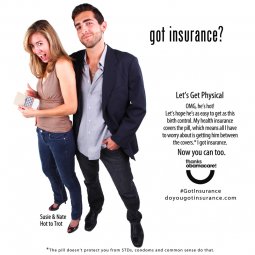 "Hosurance," on the other hand, seems to have been generated by Twitter -- and picked up by critics -- when the most recent wave of ads, featuring women, was launched.

"I know that there has been some controversy around some of the ads, but I don't think anything you see in any of our ads is anything you wouldn't see during the Super Bowl," said Jen Caltrider, digital director of ProgressNow Colorado Education. "I think the controversy mostly pops up around the fact that this is associated with a very controversial healthcare law where there's a lot of misinformation."

She added that the nonprofits haven't heard anything from the White House or Democrats regarding the campaign.

Ms. Caltrider said the groups spent about $100 to promote the campaign on Facebook and Twitter, and not much beyond that. The campaign targets families and young adults, particularly women, with new ads rolling out weekly on Facebook, Twitter, Instagram, Tumblr and Pinterest. There are no plans yet to do out-of-home marketing or TV ads, though Ms. Caltrider said banner ads will likely be the next phase if "Got Insurance?" gets money. 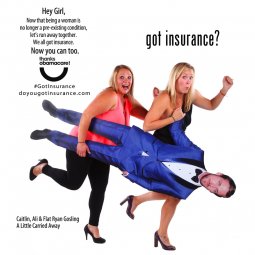 "The ads are tailor-made to help [the cause], assuming they have the resources to get the ads out there," said Elizabeth Wilner, VP-strategic initiatives at Kantar CMAG. "Even a great digital ad campaign needs a little money behind it, but it's certainly geared towards young people, and that's the audience everyone knows needs to sign up for health insurance in order to make the whole model work."

The nonprofits intend to continue the campaign through Dec. 15, and may extend it through the end of March, when open enrollment in health exchanges closes. Denver-based agency Pilgrim is officially handling the ad campaign for the state's exchange, Connect for Health Colorado.