Congress vs. the tech titans, plus the TikTok vs. Facebook SmackDown: Thursday Wake-Up Call | Ad Age
Skip to main content

Also, if you could pitch your agency to P&G, what would you say?
READ THIS NEXT
Dunkin’ in sale talks, and Fox News wins election ad spend race: Monday Wake-Up Call 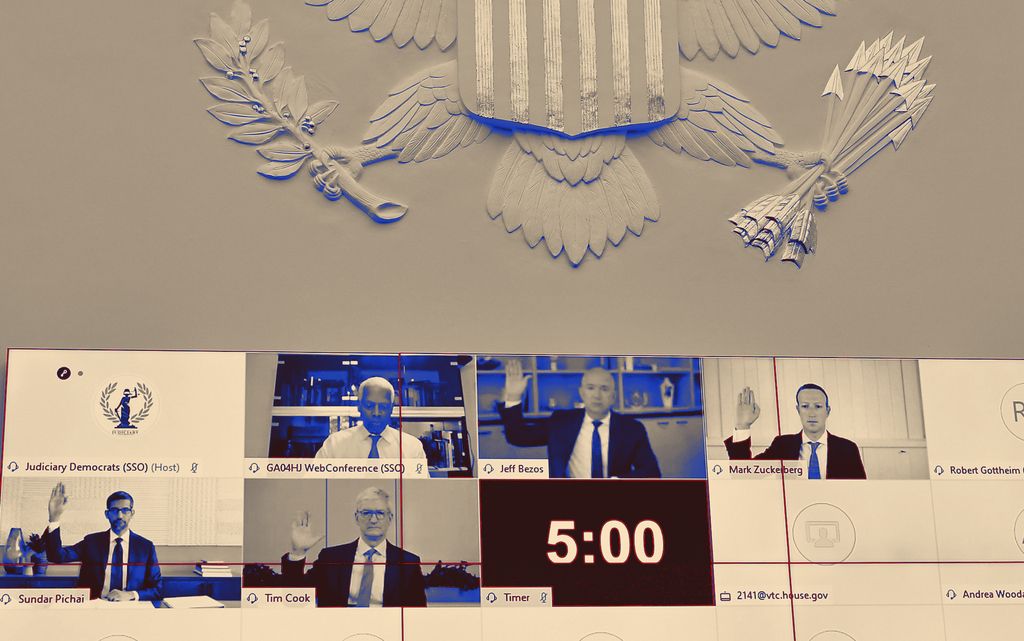 The tech CEOs are sworn in during a House Judiciary Subcommittee hearing on Wednesday.

Facebook CEO Mark Zuckerberg, Amazon CEO Jeff Bezos, Alphabet/Google CEO Sundar Pichai and Apple CEO Tim Cook (virtually) appeared before the antitrust subcommittee in the House of Representatives on Wednesday, and there were more than a few fireworks. Ad Age’s Garett Sloane and George P. Slefo took in the whole grueling show and have served up a sampling of the day’s most contentious moments, including:

• Bezos was confronted over tactics Amazon uses to create new products that compete with small sellers on its site.

• Zuckerberg was grilled about Facebook’s acquisition strategy, especially how it bought Instagram in 2012.

• Pichai was interrogated about Google’s 2008 acquisition of DoubleClick.

• Cook was questioned about whether Apple used its power as gatekeeper of the App Store to quash competition.

• “Five takeaways as panel grills tech CEOs,” from The Hill—e.g., “Lawmakers have collected a lot of info from Big Tech’s competitors” and “Republicans steer discussion away from antitrust” (and toward “potential censoring of conservatives” on social platforms).

• One delicious detail from the day’s proceedings shared by CNN Business: Rep. Joe Neguse brought up a 2012 internal Facebook email in which Zuckerberg wrote, “One reason people underestimate the importance of watching Google is that we can likely always just buy any competitive startups, but it’ll be a while before we can buy Google.” Zuckerberg, when asked about it, “said he didn’t recall the email, but that it ‘sounds like a joke,’” per CNN Business.

One tech chief who wasn’t called before Congress is Kevin Mayer, the CEO of TikTok. But he spoke out anyway in the form of a sort of open-letter blog post published on Wednesday in an attempt to leverage the news cycle.

In “Fair competition and transparency benefits us all,” Mayer makes a point of going after Facebook:

“At TikTok we welcome competition. ... To those who wish to launch competitive products, we say bring it on. Facebook is even launching another copycat product, Reels (tied to Instagram), after their other copycat Lasso failed quickly. But let’s focus our energies on fair and open competition in service of our consumers, rather than maligning attacks by our competitor—namely Facebook—disguised as patriotism and designed to put an end to our very presence in the US.”

Meanwhile, in the funny-because-it’s-true department ...

The Onion just published a list of the “Pros And Cons Of Banning TikTok,” and they’re pretty spot-on. Among the pros: “Perpetuate illusion of keeping Americans’ personal data safe,” “Easier than trying to figure out how it works” and “Prevents China from pilfering national choreography secrets.” The cons include “Teens will just find another way to hand over personal information to foreign companies” and “The only TikTok we’ll have left to entertain us is the long, drawn-out passage of time.” Keep reading here.

Small agencies, big ideas—and P&G will be in the house

Speaking of the passage of time: You’ve got just four days left to secure a ticket to Ad Age’s Small Agency Conference & Awards, a three-day virtual event tailored specifically to the needs of shops with fewer than 150 employees. Check out the full agenda for the Aug. 3-5 event here.

Tickets are super affordable—and The Elevator Pitch is back, baby! The Pitch pitch: “If you had the opportunity to pitch your agency to Procter & Gamble, what would you say? ... You’ve got five minutes to show P&G what you’ve got.” Apply here for a chance to pitch.

American consumers are feeling more pessimistic lately. “U.S. consumer confidence declined in July by more than forecast,” Bloomberg News reports, thanks to recent spikes in COVID-19 cases across the country and the attendant rethinking of the safety of rapidly reopening the economy. “Households may also be growing anxious about whether lawmakers will extend benefits such as the extra $600 in weekly unemployment payments that are set to expire in coming days,” Bloomberg adds.

Justice vs. Google: “An inside look at the Justice Department’s antitrust case against Google” (Ad Age).

“A new Instagram account, TrueColors.official, is filled with logos of famous brands, including Adidas, Starbucks, Under Armour, Microsoft and Netflix”—except they’re “completely devoid of color, rendered only in white and varying shades of gray,” Ad Age’s Ilyse Liffreing reports. The point: “What if brand logos were as white as their leadership?” per the account description. See them here.