The rich -- and marketers who cater to them -- just keep getting richer as everyone else struggles through a so-called recovery. That fact of economics could reshape marketing strategies this year, and for years to come.

Last year, the only growth in spending came from people making $100,000 or more annually, said David Calhoun, CEO of Nielsen Co., speaking at the Advertising Research Foundation's annual Re:Think conference in March. If anything, the disconnect between the haves and the have-lesses has only kept widening since. The ConsumerEdge Research monthly tracker, based on surveys of more than 2,000 consumers, helps illustrate this vividly.

Overall, its "Willingness to Spend" index of U.S. consumers has fallen fairly steadily from 103 in May 2010 (just before the so-called summer of recovery) to 96 last May, where 100 equals sentiment levels in December 2009. But willingness to spend has been on the rise lately among the high-income segment -- that 16% of the U.S. population making $100,000 or more annually. Their spending sentiment index rose from 118 in December to 131 in May. Their index is down 6 points from 137 a year ago, but they're the only income group more willing to spend now than they were in December 2009.

For marketers, the growing disconnect in the market can have big implications. Perhaps none feels it more acutely than Walmart, caught in a classic middle-class squeeze.

The $100,000-plus households who traded down to Walmart at the beginning of the recession have been returning to their old shopping haunts. But more of Walmart's core consumers have been trading down to smaller sizes, lower-ticket items and closer locations amid rising gas prices -- all offered by dollar or drug stores. The result: Eight straight quarters of declining same-store sales for Walmart with a ninth a real possibility. 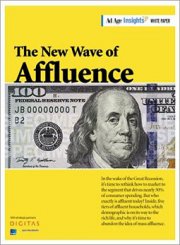 A new study from Digitas, based on data from the Mendelsohn Affluent Survey and Mendelsohn Affluent Barometer, explains why mass affluence is over, which households are likely to achieve wealth in the next decade, and how media use changes the wealthier one becomes.

For other mass marketers, where they fall in the growing "bifurcation" of the market also could play a big role in deciding winners and losers this year as they try to raise prices, said Sanford C. Bernstein analyst Ali Dibadj.

Estee Lauder, whose consumers on the whole earn 19% higher than the U.S. average, according to Bernstein research, has been thriving with double-digit organic sales gains the past year. CEO Fabrizio Freda revealed at the Consumer Analyst Group of New York in February that the company has been looking into raising prices, not because it particularly needs to, but because research suggests it can.

Almost every other consumer marketer, however, has been sweating the details of how much they can raise prices without affecting volume and losing share. Avon Products, with the income of its consumers nearly 26% below average, faces perhaps the biggest challenge.

But the income disparity of consumer bases could even factor into such seemingly unlikely places as the cola wars. Coca-Cola Co.'s consumers have incomes 3.7% better than average, according to Bernstein, while PepsiCo's consumers' incomes 1.3% above average and Dr Pepper Snapple's consumers' incomes are 1.3% below average.

One reason Procter & Gamble Co. is confident its current round of price hikes to recover commodity-cost increases will stick more readily than those taken in 2008 is that at least this year, wealthier folks are more confident. "You saw the whole affluent class come out of the market in 2008, and what we're seeing now is a very strong resurgence of the affluent class," said P&G Chief Financial Officer Jon Moeller at a Deutsche Bank investor conference in Paris June 15.

In one sense, nothing much has changed from the trend of the past three decades. Real wages have been largely flat overall since 1980, even as real GDP doubled. The top 1% of earners, as a result, have seen their share of total income double to 20%, even as their tax rates plunged. More broadly, the top 20% of earners have seen their share of U.S. income increase from 45% in 1980 to 50% in 2009 while the shares of every other quintile fell, according to Sanford C. Bernstein research.

For much of that period, however, middle- and lower-income people could grow spending faster than income thanks to loose credit and rising home prices -- factors that disappeared in the Great Recession and show no signs of returning.