ANA Exec: 'We're Not Ventriloquist Dummies Through Which the Government Speaks'

Tobacco marketers cannot be forced to put the government's graphic anti-tobacco warnings on cigarette packs in the U.S., according to a court ruling, meaning a movement that has started overseas will not make its way here.

The Association of National Advertisers applauded the U.S. Court of Appeals for the District of Columbia Circuit, which Aug. 24 vacated, or set aside, the Food and Drug Administration rule requiring the graphic warnings on all tobacco products or ads. 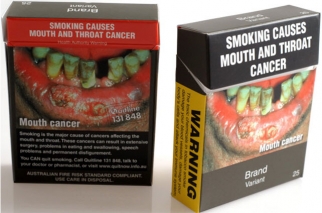 This decision comes less than 10 days after a ruling in Australia's top court that made it the first country to require cigarettes to be sold in uniform packages, setting a precedent for other nations to follow.

According to a statement from Dan Jaffe, ANA's group exec VP for government relations, "the court held that the Rule would turn product packages and ads into miniature billboards for the government's desired message," which is unconstitutional, thanks to the First Amendment.

"We're not ventriloquist dummies through which the government speaks," he told Ad Age . He pointed out that the First Amendment "doesn't stop the government from speaking on its own and using whatever images they want [but] it stops them from making [a marketer] say what it want [them] to say."

The government can, for example, mandate neutral factual labeling, such as ingredient labels on food packages or the health warnings currently gracing U.S.-sold cigarettes. But the graphic images of rotting teeth or smoke coming out of someone's throat that have been cropping up in countries from Canada to Turkey fall into the range of emotive messages that go beyond factual claims, and cannot be required here, according to the court's decision.

"While the issue here is tobacco advertising, there are numerous other products for which this Rule would have set a very dangerous precedent," said Mr. Jaffe, in the statement applauding the decision. "History shows that there is a wide range of products about which some believe 'the government knows best' and should have the power to regulate advertising in order to tilt public debate in a preferred direction. That is precisely the kind of paternalism that the First Amendment does not permit."

The case, RJ Reynolds Tobacco Company v. FDA, may still make its way to the Supreme Court, as it's likely to be appealed by the government.