The Olive Garden in Grand Forks, N.D., may be "the largest and most beautiful restaurant now operating" in that city, according to local critic Marilyn Hagerty. But Olive Garden's parent company, Darden, isn't getting as much love elsewhere.

Darden, which also owns Red Lobster and LongHorn Steakhouse, last week cut its forecast for 2013. Much coverage centered on the negative attention the chain garnered from its test to limit employee health-care costs, but marketing was also at fault. Darden, which rode the recession well with its value pricing, got complacent with deals and was outpromoted when rivals resurged.

"This year's promotional offers were largely consistent in nature with what we've promoted successfully in the past," said Clarence Otis, Darden's chairman-CEO. "These promotions did not resonate with financially stretched consumers as well as newer promotions from competitors."

He added that the "disappointing results" for the quarter mean that the company will need "bolder changes" to the promotions at its restaurants. Darden is now retooling promotional calendars at Red Lobster, Olive Garden and LongHorn "to ensure they better fit consumers' current financial realities and expectations."

Olive Garden and its competitive ilk have been advertising deals for two, such as Olive Garden's three-course "two for $25" deal, which it started in July. It also has a limited-time bottomless pasta bowl for $9.95. Meanwhile, competitors such as Chili's and Applebee's have been offering "two for $20" promotions, which include an appetizer and two entrees. 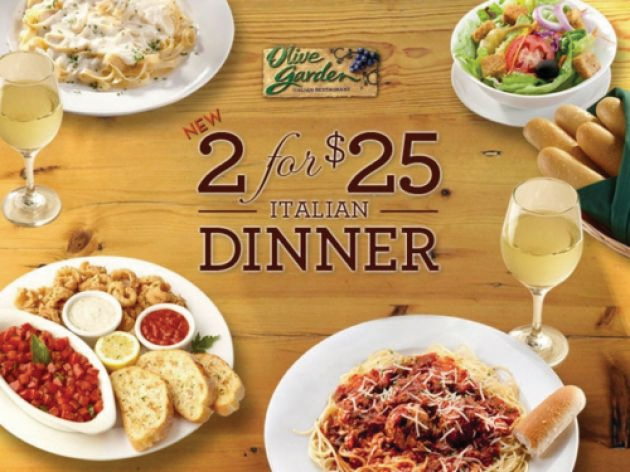 It's not surprising that the promotions began to fail for Darden. "What happens is that after [value promotions] have been in place for a while, consumers no longer perceive them to be a deal," said Bonnie Riggs, restaurant-industry analyst at NPD Group. Darden in 2011 spent $194 million on Olive Garden on measured media, according to Kantar Media, up from $162 million in 2010; from January through September, it spent $135 million.

In the casual-dining segment, roughly 20% of traffic is driven to a restaurant by value or meal deals, according to NPD Group. In the year that ended in September, the traffic of those value customers is down 4%, while general traffic fell 2%."These strategies are not driving traffic," said Ms. Riggs.

Price competition among the major casual-dining chains has gotten so competitive that the chains have ultimately done themselves a disservice. "Most of the casual-dining chains set the bar at $10 for a meal," said Darren Tristano, exec VP at Technomic. "It's not good, because it's establishing the price that the consumer wants to spend." He added that most of these chains have $12 to $14 check averages—higher than what consumers have been accustomed to paying. "If your driver is price point and you move from, say $9 to $10, you're going to struggle," because percentage-wise, that 's a significant price hike, Mr. Tristano said.

Darden's woes, of course, aren't unique. McDonald's global October sales were down 1.8%, its first global sales decline in nearly a decade. Sales were down 2.2% in the U.S. Analysts have said that McDonald's tried to balance value with premium items in marketing to little avail. It also suffered from price increases and a lack of major innovation this year.

"Value has not been as sharp as it needs to be," said Bernstein analyst Sara Senatore in an email to Ad Age . "Over the course of the year we have heard repeatedly from both [McDonald's and Darden] that promotions didn't resonate as well as they expected," she said, pointing to McDonald's attempt to balance premium with value, and Olive Garden's $1 price hike on its endless-pasta-bowl promotion this quarter.

Chains such as McDonald's, Darden and Chipotle performed well through the recession and are now hitting bumps in the road, largely because of the improving circumstances of their competitors. Chains that struggled throughout the recession have gotten much more aggressive in innovation, pricing and promotion, and now McDonald's and Darden have to react.

McDonald's will change up its early-year marketing calendar to focus more on value in its advertising. Darden is likely to develop new value promotions and market them heavily.