The data-centric approach used in targeting for digital ads is starting to take effect in TV buying, where the majority of political-campaign-ad budgets go. Rentrak, a firm that provides local and national TV data on 12 million households from its partners in cable, satellite and telecom, is a case in point. Last year, the firm worked with the Obama for America campaign, feeding information on TV audiences that were matched against voter-file data to develop ways to reach key voter targets through TV. 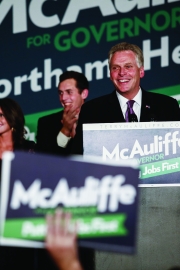 This year the company did even more political business, despite just a handful of gubernatorial, mayoral and down-ballot races in play, according to David Algranati, Rentrak's senior VP-TV product innovation. He said revenue from political clients has grown two to three times since last year, and considering that 2012 marked a nationwide effort for Obama's presidential run, the increase is significant.

The company uses an outside firm -- in 2013 it was Experian -- to match its TV-subscriber data to voter-file data from the campaigns and their parties. The end results are anonymized audience segments categorizing voters according to interests, likelihood to vote and political leanings.

The old model is "'What kind of viewers do these programs deliver?' and our approach is to turn that on its head and say, 'Who are the people we want to hit?'" said Larry Grisolano, partner with Democratic TV-buying firm AKPD Message and Media. "There's no doubt we were able to find programming that is richer in our targets than if we were just doing the typical buy without the benefit of this research," said Mr. Grisolano, whose firm partners with online-ad firm Bully Pulpit Interactive and TV-targeting platform Anayltics Media Group.

Traditionally a campaign would buy TV based on ratings showing, for instance, that adults 35 and over in a particular market are core viewers of a show. Today, by combining voter data with set-top box data, campaigns might learn that a segment of voters they hope to influence has a 3 rating with Comedy Central's "Colbert Report," suggested Mr. Algranati.

The concept is still quite new and certainly not prevalent among all campaigns, but insiders believe it's the wave of the future for TV targeting.

Firms sprout up
Firms are sprouting up to serve the fledgling market for voter-data-fueled TV targeting. Along with Analytics Media Group, Bluelabs serves the left and Deep Root Analytics serves the right. "The fact that you had both of the 2013 Republican gubernatorial campaigns using advanced TV targeting speaks to how likely you'll be to see this in broad use in 2014 and beyond," said Alex Lundry, co-founder of Deep Roots Analytics, which does voter-file-enhanced TV-ad targeting for GOP campaigns. "There's no doubt the data is in the middle of TV buying in a way it's never been before," said Michael Beach, co-founder of GOP digital-ad firm Targeted Victory.

For Democrat Terry McAuliffe's winning Virginia gubernatorial effort, which worked with Rentrak, more refined voter segments offered the opportunity to deliver thousands of nuanced messages to voters, mainly online. "We had more creatives per voter in Virginia than I think we did on OFA nationally," said Mark Skidmore, partner and chief strategist at Bully Pulpit Interactive, which handled digital advertising for the campaign. The campaign developed around 3,500 different ad versions, he said.

The McAuliffe campaign spent around 25% of its persuasion-ad budgets (meaning on ads intended to sway voters rather than to generate fundraising dollars) on ads that targeted based on voter-file matching, and were purchased through exchanges and automated TV-buying platforms rather than ads targeted behaviorally or demographically.

Still need frequency
"Campaign strategists are crunching the numbers and seeing the lift they can get by making their TV ads more efficient and more effective and realizing that this is well worth the cost," said Mr. Lundry. "We are seeing costs savings between 10% and 20% compared to traditional TV buys, not to mention the fact that you're now more likely to get the ad in front of those voters that matter most."

While data-centric ad buying may reduce some waste and create some efficiencies, overall campaign costs aren't necessarily going down, said Mr. Skidmore. In addition to ensuring enough resources to produce creative variations, campaigns need to make sure their ads are seen multiple times whether online or in TV. "You're still going to have to spend on the frequency part," he said.

However, while digital data is changing TV targeting, the promise of cross-platform digital and TV-campaign planning and buying remains somewhat elusive. Although some parts of the process are automated, said Mr. Beach, the actual TV-buying transaction "still requires a personal touch."