You may never be able to try lembas -- a fictional bread that Frodo subsisted on through part of his journey to Mordor in the "Lord of the Rings" trilogy -- but Denny's thinks it might have the next best thing. The company is about to roll out a Middle-Earth-inspired menu as part of a tie-in with "The Hobbit: An Unexpected Journey."

Along with the menu, the chain is launching a marketing campaign around one of its biggest-ever movie tie-ins.

The campaign will include a TV spot that will begin airing Nov. 12, ahead of the movie's Dec. 14 release date. Hobbit-inspired menu items will be available beginning Nov. 6 and are expected to be offered through early January. It began with a teaser campaign of unbranded billboards in the Los Angeles area and online banner ads written in a fiction script created by author J.R.R. Tolkien, that said "Middle Earth is coming to America's diner." Starting Wednesday, those will be changed out for branded ads in English with the same message. 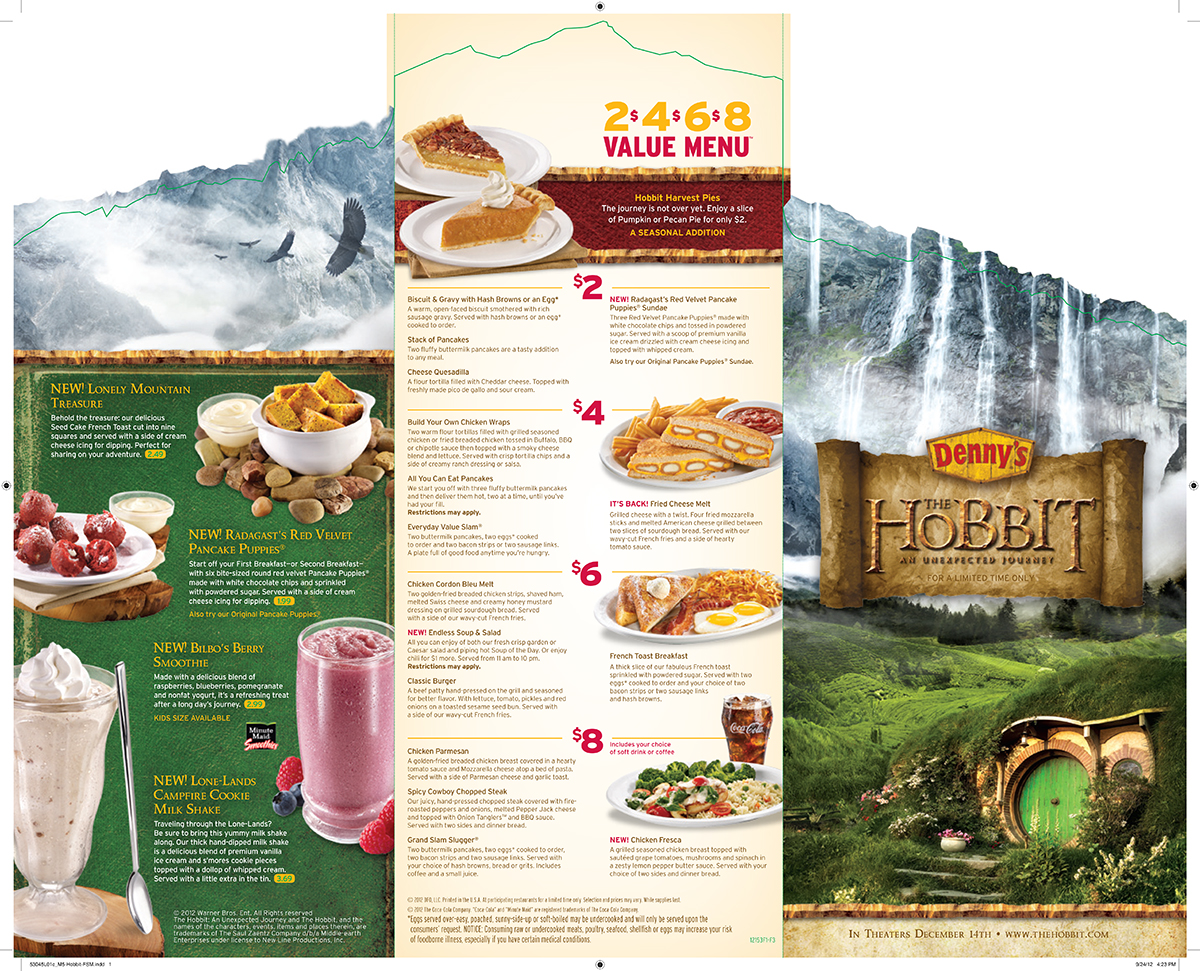 Menu items include 11 breakfast, lunch and dinner items such as "Hobbit Hole Breakfast," "Frodo's Pot Roast Skillet," "Gandalf's Gobble Melt" and the "Build Your Own Hobbit Slam," which includes limited-time items such as "Shire Sausage."

Fans of the Hobbit knows that hobbits eat two breakfasts, and eat about seven times per day. "We just felt with the two breakfasts that whole notion of comfort eating and comfort food" were a fit for Denny's, said Frances Allen, CMO at the restaurant chain. She added that "The Hobbit" has a huge following "across a broad spectrum of people," including families and millennials, which are Denny's top targets.

Denny's customers will also receive a trading card pack with select "Hobbit"-inspired entrees that include collectible cards -- there are 12 in total to collect -- and Denny's coupons. The chain will also put QR codes on placemats that will provide customers with additional "Hobbit"-related content such as videos, online games and a behind-the-scenes look at the national TV spot.

Though the chain doesn't do movie tie-ins on a regular basis, past tie-ins include last year's "Arthur Christmas," "Madagascar" in 2005 and 2004's "Cinderella." For Cinderella, Denny's was the exclusive restaurant distributor of the official movie poster. For the Lord of the Rings franchise, Burger King had a promotional tie-in in 2001. Denny's last year spent about $63 million on U.S. measured media, according to Kantar Media.