DETROIT (AdAge.com) -- Stung by a membership decline that's only worsened as automakers' accounts leave the Motor City, the 102-year-old Detroit Adcraft Club is trying to capture the interest of creatives with a new awards show that embraces marketing disciplines more relevant to today's agency. 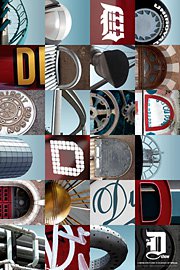 Adcraft's D Show will honor not only creative, but also a broader band of disciplines that reflect today's marketplace.
"We have not embraced, nor been embraced by the Detroit creative community in decades," admitted Bob Guerrini, executive director of the club. Adcraft's membership started falling in 2000 from a high of 4,000 to a low of 2,200 in 2004. "There's been belt-tightening and there's fewer jobs across the board," including at agencies, clients, media reps and suppliers, Mr. Guerrini said. Even so, it's still the nation's biggest ad club, and membership has inched up in the past several years, stabilizing in the 2,500 range.

Wooing back creatives
Dave Woodruff, who recently wrapped up his tenure as president of Detroit's Adcraft Club, said one of the main objectives of his term was to bring creative back into the organization. "It wasn't just my vision; it was shared by the whole board," said the group ad director of Hearst Magazines in suburban Detroit.

So about a year ago, Adcraft started working with the Detroit Creative Directors Council, or DCDC, a group not affiliated with the ad club, to devise a solution to woo back creatives. The result is the D Show, beginning this November, that will honor not only creative, but also a broader band of disciplines that reflect today's marketplace, said Bill Ludwig, chairman of the Adcraft's D Council, which oversees the show.

"We wanted to recognize the convergence of a vibrant creative class beyond the ad community," said Mr. Ludwig, also vice chairman of Interpublic Group of Cos.' Campbell-Ewald, Warren, Mich. The new show "will signal the change reflective in what's going on in creative."

In addition to ad creative, the D Show will celebrate excellence in media, experiential marketing, gaming, branded entertainment, sound production, as well as noncommercial film, music, computer graphics, industrial design and fine arts. Only work produced by a Detroit-area company or work for an area client will be accepted.

Calling for entries
E-mails announcing a call for entries for the show this November went out today to some 800 people. (Sam Sefton, a creative director of BBDO Detroit, Troy, Mich., designed the show's call-for-entries poster.)

The D Show was preceded by the longstanding local Caddy Awards, which since 1989 had been organized by the DCDC, now disbanded. But both attendance at and entries for the annual contest had dropped off in the past few years, said Mr. Ludwig.

Detroit's auto ad agencies had dominated the Caddy Awards. Winners got statuettes of a cartoon-looking car on a pedestal.

Since then, however, several big auto accounts have left Detroit for other areas. Mr. Ludwig, however, noted that more than 50% of his ad agency's client base is non-General Motors Corp. "Detroit isn't just about cars."