Pepsi is hitting the airwaves in a big way this spring, with new spots for Diet Pepsi and Pepsi Max.

While PepsiCo has been pushing its Pepsi Max brand with TV commercials, a Super Bowl presence and sponsorships of the National Football League, Major League Baseball and Major League Soccer -- all quietly transitioned from flagship Pepsi -- Diet Pepsi has languished. It's been four years since Diet Pepsi received any dedicated advertising attention, with only $500,000 spent on measured media in the past three years combined.

Now PepsiCo is giving attention to its individual brands, pledging to up ad spending across its beverage portfolio by 30% this year. The company is also sinking $60 million into its sponsorship and integration with "X Factor," the Simon Cowell-created music competition that is meant to compete with "American Idol," which is sponsored by Coca-Cola.

Diet Pepsi's new spot features Sofia Vergara, who has also appeared in print ads touting the Skinny Can. In the spot, Ms. Vergara, who stars in ABC's "Modern Family," tweets that she has seen David Beckham as a means of clearing a beach, so that she can get herself a Diet Pepsi. Mr. Beckham makes a cameo appearance in the spot. Worth nothing, Ms. Vergara sips from a regular can in the spot, not the Skinny Can.

"It was an easy [decision], because the base 12-ounce can is what consumers buy the most and relate to most," said Carlos Zepeda, Diet Pepsi marketing director. He said the brand is aware of the controversy the can caused but that "at the end of the day, the Skinny Can was a way to innovate." Some have criticized Pepsi for celebrating the skinny shape.

Mr. Zepeda said the brand has formalized its relationship with Ms. Vergara and that she will appear in future TV spots, if there are any. It's not been decided yet whether new Diet Pepsi ads are coming in the second half or whether the campaign will move outside of the U.S., he said. Mr. Beckham's appearance in the spot was just a one-time thing, Mr. Zepeda added. But the brand is getting plenty of buzz from Mr. Beckham's appearance, as well as a video gone viral that shows him kicking three soccer balls into three distant trash cans. The clip now has nearly 3 million views on YouTube.

"This year is all about bringing Diet Pepsi back into the conversation," said Mr. Zepeda. "Consumer engagement metrics are up. Our Facebook page, launched this year, now has 130,000 fans. We have a long way to go, but we're very excited and optimistic. Everything is synching up."

Meanwhile, Pepsi Max is on air with a spot titled "Clubhouse in the Corn." That spot also has a tie-in with mobile app IntoNow, allowing customers to "check in" to the commercial and receive a coupon for a 20-ounce Pepsi Max.

The spot is an homage to "Field of Dreams" and features a slew of past and present baseball greats, including seven Hall of Famers. Filming took place in Florida during spring training. 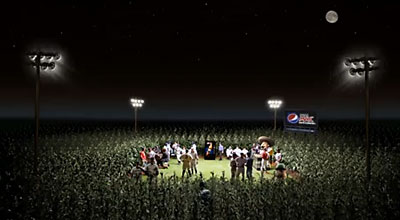 Pepsi Max appears in a new spot 'Clubhouse in the Corn.'

"You would think that getting that many athletes in one place would be really challenging," said Mark Rooks, senior director-sports marketing at Pepsi. "But everyone got really excited after we shared the concept. There's a certain amount of camaraderie [between the players]."

Mr. Rooks said the MLB effort is expected to continue the momentum seen from Pepsi Max's NFL activity. The brand's volume is up 80% year-to-date, compared to a year ago, he said. Pepsi Max is now being touted as the "official soft drink" of the NFL, MLB and MLS.

"First and foremost we recognize that sport is a really viable way to speak to our consumer, particularly the target audience for Pepsi Max," Mr. Rooks said. "We believe this campaign, the relationship with MLB and all of the efforts we'll have in and around ballparks will help to drive the conversation about Pepsi Max."

Two additional spots, "Build It," which will run only online, and "Rally," are also on tap for Pepsi Max. Coming up for Diet Pepsi are programs around the British royal wedding and Mother's Day. Mr. Zepeda said the brand is partnering with media outlets to provide "inside scoop" on the royal wedding via its Facebook page, as well as running a TV ad during the telecast of the event. For Mother's Day, the brand plans to offer customers a 15% discount at SpaFinder, as well as the chance to win a $100 gift card when they purchase products at retail.