What the Weight-Loss Biz Has in Store for 2010

As Consumers Spend Less on High-Priced Programs, Nontraditional Players Like Kraft Offer Up DIY Plans
READ THIS NEXT
Trump spends big on the late-night TV shows that ridicule him daily

NEW YORK (AdAge.com) -- The recession is slimming down the diet business.

Though the $59.7 billion industry rose 2% in 2009, that's way down from its historical rate of 6% or higher annual growth, said John LaRosa, who runs Marketdata Enterprises and BestDietforMe.com. The industry has taken a beating as high-priced diet programs lose subscribers to cheaper weight-loss options -- or no diets at all.

"The recession of the last two years affected people so that more people traded down to lower-priced food and fast food and more comfort food to combat their stress," Mr. LaRosa said. The result has been a rise in the do-it-yourself diet; he said that 76% to 78% of dieters are following regimes at home, rather than with institutional programs. That's up sharply from a historic average of about 70% who have gone it alone.

"We think the do-it-yourself programs and meal replacements will continue to do well at least through first half because they're inexpensive and easily obtained," Mr. LaRosa said. "High-priced programs like Jenny Craig will continue to struggle." To win new dieters, and keep others in the fold, he said diet companies will continue to offer incentives such as waived registration, free weeks of food and free shipping throughout the year.

Even so, there's still opportunity for the industry to steal share and as non-traditional "diet" players such as fast food get into the act. An estimated 75 million Americans will diet sometime this year, but many will stop and start three to four times, often with new programs. "There's not much loyalty among dieters," Mr. LaRosa said.

And that could be good news for the industry: As Americans trade down to cheaper, more comforting food, they're now bigger than ever before. "When they do go back to diet programs, they'll have more to lose, and it'll take them longer to lose it, so they'll stay longer on the diet programs."

Below is an outline of how some of the bigger players are marketing during diet season.

The package-food company's free Food & Family newsletter is offering subscribers a variety of 500-calorie meals to be prepared primarily with ingredients most households have on hand. Ideas include a spicy chicken stir fry, shrimp, tortellini and spinach, and slow-cooker sweet-and-sour pork. The company recently shifted its associated magazine to a paid model, now with more than 1 million subscribers. Kraft uses the e-mail blast to reach consumers who are looking for instant inspiration to get dinner on the table -- with Kraft products, naturally.

In an attempt to reinvigorate its 10-year-old Jared Fogle campaign, Subway has added to its endorser roster "Biggest Loser" participant Shay Sorrells. Ms. Sorrells, who lost 161 pounds during the show, still weighs 315 pounds. Subway is offering her $1,000 for every pound she loses between now and May, and will update consumers on her progress through "Biggest Loser" integrations and other advertising. Subway's agency is MMB, Boston.

Last year it was the egg-white flatbread sandwich, this year Dunkin' Donuts will let you try your favorite breakfast sandwich with egg whites. The chain is promoting the new option with ads from agency Hill Holliday, Boston.

With a campaign from agency DraftFCB, Irvine, Calif., Taco Bell has raised some rancor in the blogs, but that's also raised awareness of its better-for-you Fresco menu. The so-called "Drive-Thru Diet" takes a page from Subway and features Christine Dougherty, who lost 54 pounds by replacing her regular fast-food lunch or dinner with items from the Fresco menu, along with regular exercise.

The brand launched an integrated marketing campaign after Christmas with the new tagline, "Water your body." The concept, featuring water as "transforming, sustaining and life-enhancing," is from new agency McGarryBowen. The campaign includes print, TV and digital work, and will be the basis of brand support, new product marketing and sustainability initiatives.

The largest diet program is flooding the airwaves with creative from Interpublic Group of Cos. agency McCann Erickson, New York, featuring Hungry, a fuzzy, orange monster who "destroys weight loss." In the spots, women arrive at parties and leave Hungry outside the door. The company is offering two months of membership for the price of one, about $40.

With agency DraftFCB, Chicago, Jell-O launched creative for sugar-free mousse snacks last week. The 60-calorie Mousse Temptations, in dark chocolate, chocolate indulgence and caramel cr?me flavors, are presented as alternatives to ice cream, and worthy of a woman's "me time." With spending in TV, print, online, in-store and PR that will continue into May, this is Jell-O's biggest new-product push.

The Cadillac of diet programs is sharpening its elbows this winter with a comparative campaign promising that its clients lose "twice as much weight as the largest diet program," a none-too-subtle dig at the lower-priced Weight Watchers. To juice interest, the company has added "Less than Perfect" actress Sara Rue and "Seinfeld" actor Jason Alexander to a roster that already includes "Family Guy" actress Nicole Sullivan and veteran anchor spokeswoman Valerie Bertinelli. To kick off the New Year, Jenny Craig is inviting new members to lose 20 pounds for $20, plus the cost of food. The company's creative agency is Y&R, Irvine, Calif.

Just in time for diet season, Starbucks has revamped its lunchtime and afternoon offerings. Four of its panini sandwiches have 400 calories or fewer, and a number of snacks have less than 220 calories. The chain will also be promoting its tall skinny lattes, which have 90 calories or less. Starbucks conducted a similar overhaul of its breakfast items in 2008. The chain's agency is Omnicom Group's BBDO, New York.

The chain that brought you "Hillbillies in a Bathtub" may also be concerned about your waistline, introducing a menu of options with 500 calories or fewer. Consumers can now choose salad-and-sandwich combos, or larger sandwiches, as lower-cal options. The chain works with agencies on a project basis; the 500-calorie menu was created in-house.

The regional bakery sandwich chain is promoting what could only be construed as a better-for-you menu in the fast food world: the "100 under 600" program, connoting soup, salad and sandwich combos under that calorie count. While 600 calories is hardly considered diet food, Corner Bakery is asking patrons to respond to healthy-eating tweets on weekdays until Feb. 19. The first five replies every day will be e-mailed a free combo coupon. 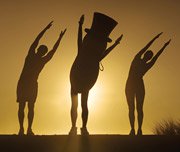 With agency DraftFCB, New York, Kraft is bringing Mr. Peanut back into an "active role," doing yoga, among other things, in a series of print ads through February for antioxidant and omega-3 NUT-rition mixes. Print ads appear in January and February magazines.