How Discounters Use Sports as Means to Connect With Customers

While Target and Walmart Go Big on Auto-Racing Sponsorships, Kohl's Has Something for Soccer Fans and Kmart Favors Wrestling Buffs

Soccer moms, Nascar dads ... if Target , Walmart, Kmart and Kohl's are blue-collar to the core, then so are their sports sponsorships.

Two of the four retailers are heavily involved in auto racing, specifically Nascar, a third has a partnership with World Wrestling Entertainment, and the fourth is deeply invested in another slice of Americana -- youth soccer.

"Sports marketing allows Kohl's to connect with our customers through events they enjoy with their friends and family, and at the same time keep Kohl's top-of -mind," said Julie Gardner, Kohl's exec VP-CMO.

Kohl's hasn't done sports marketing on the scale that Target and Walmart have, but the Menomonee Falls, Wis., store has sponsorship deals with the hometown Milwaukee Brewers, Milwaukee Bucks and the NFL's Green Bay Packers. It's also served as a sponsor of U.S. Youth Soccer since 2005, as well as the Kohl's American Cup, a traveling recreational tournament.

If Kohl's is seeking the soccer moms, then Target and Walmart are clearly chasing Nascar dads. 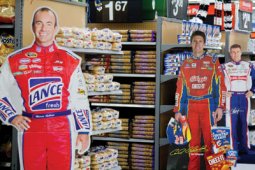 Walmart and Target spends millions of marketing dollars each year to reach NASCAR fans.
Target goes big on racing. The Minneapolis-based retailer has been in racing sponsorships for 23 years, and it has been a primary sponsor of a car, either Indy 500 or Nascar, for the past 18 years. Target currently sponsors two cars in the Izod IndyCar Series with drivers Scott Dixon and Dario Franchitti (husband of actress Ashley Judd and an Indy 500 winner), and one car in the Nascar Sprint Cup Series with driver Juan Pablo Montoya. And it isn't cheap -- sponsoring a Nascar ride for a full 36 -race season is upward of $20 million a year.

The ROI, however, is worth it, said Dan Griffis, director-strategic partnerships and events for Target . "In racing, more than any other sport, it's more about the deep connection with fans, and after 23 years of partnership with race fans in the U.S., we feel we've built a strong connection through our drivers, events and publicity," he said.

The race program is Target 's longest-running marketing program. Co-sponsors such as Energizer, Clorox, Unilever, Kimberly Clark, Pepsi, P&G and Kraft, among others, have partnered with Target for an average of nine years -- some since the inception of Target 's racing sponsorships in 1994.

Walmart announced in January that it was extending and expanding its marketing activity in racing through its "Race Time " promotion, which features Nascar-themed events with driver appearances and a racing simulator at 2,000 of its stores across the country.

It continues to offer the "Walmart Family Track Pack" at 17 of the 36 races -- four tickets, four hot dogs, four drinks and a souvenir program for $99.

For its 50th anniversary, Walmart will do a one-time primary sponsorship for the July 7 race at Daytona. Bill Elliott will drive the No. 50 Walmart Chevy at the Coke Zero 400.

Kmart has eschewed racing in favor of wrestling -- the WWE, to be exact. It has an exclusive presenting sponsorship deal for WWE's live events and its TV shows on USA Network and Syfy. The deal, signed in March of 2011, is said to be valued at around $7 million a year.