P.S. -- I Made This ... Founder Is Making a Real Business Out of Her Lifestyle -- and Partnering With Big Brands to Do So

With leopard-print Keds and art paper scattered about, Erica Domesek's apartment is , well, kind of a mess. "It's just a total wreck," she said, surveying a studio filled with typical young-New Yorker things: too many clothes, stacks of jewelry, piles of coffee-table books and a bag of dry-cleaning at the front door awaiting unpacking. And then there's the not-so-typical: a massive craft cabinet, which stores her colored feathers, glitter glue and other make-it-yourself tools. 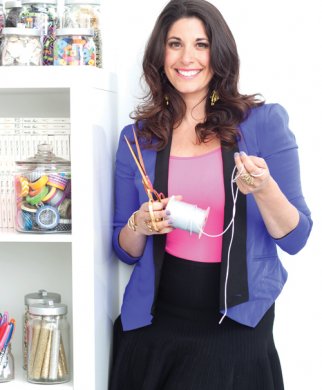 Ms. Domesek is working to build out her own DIY empire. There's a temptation to cast her as the millennials' version of Martha Stewart, mixing a do-it-yourself ethos with an appreciation for mass-market brands such as Sharpie to Gap.

Ms. Domesek, 31, is the founder of P.S. -- I Made This..., a crafting site created in 2009 as a reaction to a friend's desire to buy a $600 necklace. "I told her, "That's silly -- come over and we'll make it.' So three of my friends came over one afternoon and we made necklaces out of feathers and beads," she said. The following month, they made rope necklaces. Backstage at designer Catherine Malandrino's fashion show in February 2009, someone complimented Ms. Domesek on that creation, asking about it. "Oh, I don't have a line, I have a craft club," Ms. Domesek said. But she knew she was onto something.

To share her projects, the freelance prop stylist (Ms. Domesek has designed sets for Madewell and worked with Tory Burch, and helped Bethenny Frankel with her marketing strategy post-"Apprentice" and pre-"Real Housewives") created her own site on Tumblr, which had recently launched and was "free and easy."

Over the years, her hobby has grown into a real media company. The website is the core product, its information disseminated through all the typical social-media channels, including Facebook, Twitter and Pinterest (the largest referrer of traffic). Three years in, P.S. -- I Made This... boasts more than 500,000 unique users a month, as well as 125,000 YouTube, 110,000 Tumblr, and 41,000 Instagram followers. Her weekly newsletters reach more than 30,000 inboxes.

Ms. Domesek's first book, "P.S. -- I Made This...," is in its fourth printing. Published by Abrams Image in September 2010—a year and a half after she launched the site -- it focuses primarily on fashion-y crafts, such as a purse made out of an old pair of denim shorts. The next, set to be published by Simon & Schuster in 2013, focuses more on home and entertaining and features major brand-integration and interactive elements.

But web and print are only the beginning. Ms. Domesek recently starred on TLC's "Craft Wars," a competition reality show, and has several product lines in the works, including a collection with Victorinox Swiss Army and a December collaboration with Birchbox. While there are four pillars to the P.S. -- I Made This... brand -- digital, product, print and TV -- the screen is where she's putting a lot of effort lately, even considering living in Los Angeles for part of year.

"In an ideal world, there's a powerful television franchise to be developed not just in the crafting space but broadly in this creative-lifestyle space," said Janet Balis, publisher of the Huffington Post Media Group and Ms. Domesek's mentor. Before HuffPo, Ms. Balis was the exec VP-media sales and marketing at Martha Stewart Living Omnimedia and happened to be in the audience the first time Ms. Domesek appeared on Martha's show, which partly explains her interest in Ms. Domesek.

Ms. Domesek has appeared on Ms. Stewart's show twice -- once, she made a necklace out of bouncy balls -- and recently spoke at American Made, the conference/DIY workshop sponsored by MSLO that took place at New York's Grand Central Terminal. "I've learned from Martha ... you can really change people's lives through products and media," Ms. Domesek said. She added that it has also brought her insight into the relationship between brand and talent. "One person can't usually scale. She's done it, but it's a very rare case," Ms. Domesek said.

Martha, after years of building a mega media company with books, a magazine and TV, has recently left ad-supported TV and is trying to build a bigger web-media brand, while Ms. Domesek is taking her fledgling, Tumblr-launched empire to TV.

P.S. -- I Made This... publishes one piece of content a week. It's always a craft project that requires the reader to buy "ingredients," as Ms. Domesek calls them. She creates a Pinterest-style mood board that features items she loves inspired by the object she's about to create. "Take [inspiration] from icons like Cleopatra, Joan of Arc and Wonder Woman, powerful arm armor packs a stylish punch," she writes to preface the directions for making a beaded cuff. The project doesn't look particularly easy, but it's doable -- something one who enjoys the odd craft could tackle.

Ms. Domesek's natural business acumen may be what truly sets her apart from her contemporaries. Macala Wright Lee, a digital-marketing strategist who brought on Ms. Domesek for a 2010 project with Teen Vogue and Magic -- the fashion industry's biggest trade show -- said, "The tiniest things, from supplier contacts to mic'ing herself up at the actual event, she made it very, very easy." Ms. Domesek and several other bloggers, including Jane Aldridge from Sea of Shoes, co-hosted Teen Vogue's booth. Ms. Domesek offered buyers and editors who attended the Las Vegas conference an opportunity to craft their own "statement" necklaces.

Ms. Lee estimated that Ms. Domesek garnered 3.2 million social impressions over the course of two days, brought in $452,000 worth of earned media and made up 25% of the event's overall media coverage. "That kind of impact from just a single person -- that isn't easy to find," she says.

Ms. Domesek won't reveal how much she charges per project, but it's in the five- or six-figure range, depending on the time commitment.

Early on, she decided that banner ads would not be a part of the business model -- unusual for a web publisher. "The core of this business is style and design, and I never wanted to compromise. So much of this brand stems from my own identity and integrity, and I would never sacrifice that for a couple hundred -- or thousand -- extra dollars a month," she says.

Instead, she launches projects with brands she actually wears or uses. (Gap, the Four Seasons and Swarovski are all clients, and she's done commercials for Sharpie and created crafting kits for fashion retailer C. Wonder.) "I'm so passionate about marketing," she tells me over a plate of steak tacos, which she proceeds to show off on Instagram. "I want to be able to help brands speak to audiences. I was that girl, I am that girl, I know that girl."

Indeed, Ms. Domesek's brand is partly defined by the brands she works with -- and vice versa. One such partnership is with Victorinox Swiss Army North America, which came out of a Twitter conversation with the brand's public-relations manager, Jes Feuer.

"I follow Erica on social media, and when she naturally mentioned she used our products on Twitter, we started a conversation," she says. The two began chatting offline, and Ms. Feuer sent Ms. Domesek dozens of P.S. -- I Made This...-emblazoned Swiss Army knives, which she readily handed out to friends and colleagues (this writer included).

Ms. Domesek is a dream spokesperson for Victorinox: she's friendly, cool and reaches women, a group still miles away from fully embracing the idea of carrying a knife around. "She makes people look at our knives as a tool," said Ms. Feuer.

Ms. Feuer said Ms. Domesek's involvement has resulted in more Twitter and Instagram followers for Victorinox, and more-engaged users. In 2013, Victorinox and P.S. -- I Made This... will release a co-branded product. Details have not been revealed.

But even with these projects, can Ms. Domesek's brand really go mass? "I'd call it mainstream," said Ms. Lee, the digital strategist. "Whether you're a mom in the Midwest or you're a hipster girl in Brooklyn, you can relate to her." She described Ms. Domesek as "a balance of Real Simple meets Gwyneth Paltrow."

It also doesn't hurt that millennials, thanks to the recession and lack of jobs, have so strongly embraced DIY in a way that rivals their baby-boomer parents. Homemade marketplace Etsy is valued at $600 million, and other DIY-focused sites, including I Spy DIY and Brit & Co., the latter backed by Yahoo CEO Marissa Mayer, have launched since Ms. Domesek's appearance on the scene.

There are more ways than ever to brag to your friends about the stuff that you've made -- Instagram, Twitter, Tumblr, Pinterest -- whether it's cupcakes or a piece of furniture. And it's just as easy to sell those items through Etsy, but also via eBay and simple-to-set-up e-commerce platforms.

Meanwhile, the business capitalizes on a sort of nostalgic capitalism. This generation's heroes are the proprietors behind Brooklyn's Mast Brothers Chocolate, Portland's Bridge and Burn clothing and Detroit's McClure's Pickles, mom-and-pop operations that happen to make cool stuff at a fine profit.

That has garnered the attention of larger marketers, too. West Elm's "Market" retail concept, which opened in Brooklyn in October, is a perfect example of this artisan movement going mass. Along with in-house furniture, kitchen, bath and gardening lines, West Elm is selling items produced by local and small-batch startups, including Philadelphia's La Colombe coffee and New York's Schmidt Bros. Cutlery.

(Ms. Domesek, unsurprisingly, was one of the first to stop by , tweeting, "Pretty epic new spot. @WestElm Market is my new go-to for cool tools, bits n bobs!" from the opening party.)

P.S. -- I Made This... received an investment about a year and a half ago, but Ms. Domesek isn't disclosing who is backing her and by how much. Her business manager is Jackie Trebilcock (official title: VP-strategy and business development), and she's at the point where she's looking for additional outside support.

"I've met with agents for the past two years," she said. Previously, "we were bringing in so much business of our own, I didn't need someone. ... Now that the brand is standing on its own legs, it makes more sense. Absolutely."

Industry observers expect that Ms. Domesek will gross anywhere between $1 million and $5 million in 2013, depending on the marketing opportunities around her book. That's nowhere near Martha territory -- Wall Street expects Martha Stewart Living Omnimedia to report $205 million in sales this year, a 7.5% decline from 2011 -- but it's a start.

Some expect Ms. Domesek to be hosting her own show, producing her own products and writing another book by 2015. In the meantime, brand partnership will continue to help form the DNA of P.S. -- I Made This. "I understand people, I understand consumers," she said. "Part of this will always be a brand consultancy."