CHICAGO (AdAge.com) -- It's a surprising marketing message: Admit to the world your product was awful, but that you've fixed it and they should really try it now.

But at least $50 million later, Domino's strange strategy appears to have worked, at least initially -- the pizza chain defied the most bullish expectations last week with a 14.3% increase in first-quarter same-store sales.

Now the question is: Was the bump due to the product or simply a big infusion of ad dollars that put the brand top of mind?

Domino's Chief Marketing Officer Russell Weiner sees the results as validation that "people really do like the product." He said sales have trumped the company's expectations and more than two-thirds of consumers have said they'll be back. "The advertising itself has scored off the charts," he said. "We've never had ads score like this."

OK, the spots brought people in to try the product. But the true test will lie in repeat visitors. Darren Tristano, exec VP of Technomic, the Chicago-based restaurant consultancy, put it this way: "Heavy, heavy marketing is going to drive results," he said. The real test will be how the chain is able to sustain the gains long-term." Domino's did say that some of its first-quarter sales appeared to be coming from customers who tried the new pizza and came back for more.

It is true that the pizza chain's 14.3% same-store sales gain was historic for the fast-food industry (McDonald's posted a 14.2% gain at the beginning of its turnaround).

'Could fail miserably'
Gregg Ambach, managing director of Analytic Partners, said there's a rule of thumb. If a marketer tosses 10% of sales into advertising, it should expect a 10% bump in sales. Still, there's a massive qualifier: "Something like this could fail miserably," he said. And if marketers don't see an increase in traffic right away, it's not going to work."

In this case though, it wasn't just the message but the way it was delivered. "They had something real to say," said Mr. Ambach, who applauded the incredulity and self-deprecating nature of the spots. "They got some extra bang for the buck in the way they communicated the proposition," he said. "They took it on the chin."

Domino's Mr. Weiner credits the honesty in the ads from agency Crispin Porter & Bogusky that didn't just speak to consumers' problems with their pizza, but a general mistrust of banks, government, media and corporations in general. Besides, "we blew up the bridge," he said. "New Coke never said the original Coke stunk. There was no going back."

But separating the product's success from the advertising spending might take a while, because Domino's could reap the benefits of the initial sales surge for some time. Len Lodish, professor of marketing at the Wharton School at the University of Pennsylvania, cited an empirical study conducted by the school in 1995 that showed when an increase in advertising resulted in a sales gain, the following year held on to 70% of the sales bump, and the third year carried over 30% of the original benefit.

The longer-term impact comes from talk value associated with advertising that really connects with consumers. Once consumers start ordering pizza, the repeat business also has a multiplier effect, which can result in a sales increase that's double or triple the size of the initial sales increase, said Mr. Ambach.

Advertising to stay up
Domino's increased its measured-media spending during the first two months of 2010, 9% to $38 million, from $35 million in the first two months of 2009, according to Kantar Media. Mr. Weiner noted that the increased spending was paid for by a change in the way franchisees pay royalties. The group used to pay 6% of sales towards advertising, of which 4% went to national media, and 2% went into a regional or local pool. Franchisees now pay 5.5% of sales towards advertising, but all of it goes to national spending. The operators, in exchange, get a half-percent of sales back. This is a permanent change, and so Domino's advertising will stay at increased levels. 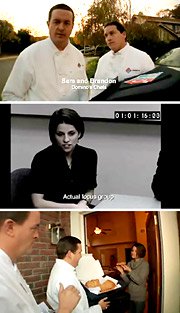 Domino's isn't saying how it's finding these people, but it's likely from their friends. For example, the chain is running a digital effort called "Taste Bud Bounty Hunter" from Crispin in which consumers can nominate people they know who haven't tried the pizza. Nominees get coupons and nominators get rewards along the way, and the consumer who "converts the most taste buds" will get a year of free pizza.