CEO Is Out, But Cheeky Ads Are Staying. Why? Because They Perform, According to the Data
READ THIS NEXT
Judge blocks Trump’s WeChat prohibition order in the U.S.

There's a lot changing at E-Trade. It's searching for a CEO and refocusing on its core brokerage business. But one thing that 's not going away is its cheeky talking baby.

E-Trade is refocusing on its brokerage business. Its campaign, however, is sticking around.
The company abruptly parted with its Chief Executive Steven Freiberg on Aug. 9 and named Chairman Frank Petrilli as his interim successor. The move comes as the company, which has seen its stock slump to multiyear lows in recent months, reports a 16% drop in earnings and a 13% fall-off in revenue in the second quarter compared to a year ago as investors made fewer trades. To address current challenges, E-Trade has been shifting its strategy to cut costs, reduce debt and move away from plagued banking products like mortgages.

The company declined to comment beyond a release about its search for a permanent CEO.

But while business may be struggling at E-Trade -- which some experts attribute to macroeconomic problems -- its advertising and marketing strategy driven by the memorable talking baby commercials still works and won't change.

"Love it or hate it, it serves as a tool to make investors aware of E-Trade, and that 's the point. Its problems aren't all that unique in the brokerage world," said Donna McSorley, co-head of financial-services practice group at BlissPR.

The E-Trade commercial was the fourth-best-liked 2012 Super Bowl ad, according to a ranking by Nielsen. According to researcher ABX, E-Trade's baby TV spot outscores all of its financial services peers, including Scottrade, Charles Schwab, Fidelity and TD Ameritrade, and gets high marks on metrics such as message, relevance and likability. It also came in above average compared to all the ads ABX measured beyond the financial-services category. 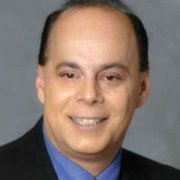 Former E-Trade CEO Steven Freiberg
But most importantly, it seems the baby is working to sell its services. In the more than four years since the baby first appeared on the TV screen during the 2008 Super Bowl, the concept continues to drive customer growth, which is now at its highest level. In the first half of 2012, the company said it brought 92,000 net new accounts compared with 99,000 in 2011 and only 54,000 in 2010. More recently, the ads have focused less on laughs as brand builder and more on using humor to highlight specific E-Trade features, such as its investing dashboard and financial consultants.

Experts said the challenges affecting E-Trade's business are industrywide and don't pertain solely to the firm. With the Euro debt crisis nowhere near resolved and trading across most asset classes at their lowest levels since 2008, many brokerage firms -- especially those highly dependent on online trading like E-Trade -- are paying the price of lower activity, they said. Investors simply don't want to trade or are staying cautious and trading at lower volumes.

"Problems at E-Trade are mainly due to the market conditions and the lack of resolution of the Euro crisis, which is leading to lower frequency of trading," said Javier Paz, senior analyst at Aite Group, a research firm focused on the financial-services industry. "The more people are waiting on the sidelines, the less impressive are E-Trade's results, despite its phenomenal brand and recognizable name."

But once the Euro crisis improves, firms such as E-Trade are likely to see a boost in business, said Mr. Paz. And E-Trade has other advantages over its competitors. As Mr. Paz noted in a report at the beginning of the year, the challenge for the securities industry in the coming decades is to engage late-teen, early-20s individuals to pick up trading and become comfortable with trading frequently as they acquire wealth. That requires a long-term commitment from brokerage firms.

For its part, E-Trade is showing its commitment with large ad budgets and by offering some of the newest technology.