Envelope Please, the 2014 Flavor of the Year is … | Ad Age
Skip to main content
Sign In Register

Next year could be the year of the blackberry. Not the struggling smartphone brand -- the actual berry.

Firmenich, which supplies flavors to food and beverage companies, has named the "subtly sophisticated, bite-sized beauty" its flavor of the year for 2014, citing the blackberry's abundance of antioxidants as well as its "delicate nuances" and ability to "surprise the palate with every bite," according to a statement.

It's only a prediction, of course. But Firmenich, which analyzes thousands of flavor profiles each year, has a pretty good track record. The global business-to-business marketer predicted lime as its flavor of the year for 2013. And lo and behold, new products launched globally with lime flavors jumped from 725 in 2012 to 873 in 2013, which was up from 656 in 2010, according to Firmenich, citing data from market researcher Mintel.

"Obviously lime has been around forever," Linda Lakind, a senior marketing manager at Firmenich, said in an interview. "But lime has been used in different ways," she added, referencing lime-inspired margarita and mojito-flavored products, such as margarita Jell-O. 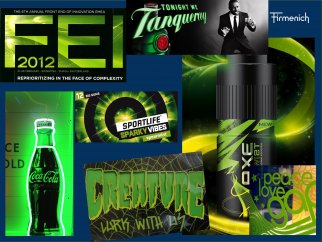 Also, "you started to see a lot of this fluorescent green packaging," as well as green-tinted ads, she noted, referencing products ranging from Axe to Coke. "Color and flavor sometimes go hand-in-hand."

Last year Pantone, which supplies color standards for design industries, named the "lively, radiant, lush" green emerald as its color of the year for 2013, noting that fashion designers, including Tracy Reese and Nanette Lepore, incorporated plenty of emerald into their spring collections. Pantone's pick for 2014? The "radiant orchid," whose "captivating, magical, enigmatic purple" is not far off from blackberry's hue.

For 2015, keep an eye on rhubarb, which has comfort food appeal. Plus, it "really blends well with strawberry," Ms. Lakind said, noting the rising popularity of strawberry-rhubarb pies. Still, "you are not going to see rhubarb necessarily by itself," she added.

But given enough time, rhubarb might break free. Consider the lesson of the mango. "You saw orange mango or peach mango, and now you see mango by itself. But it took a while for the American population to say, 'Oh, mango!' "