Big Event Is Next Year, But Qualification Is Well Underway
READ THIS NEXT
Dodge pays homage to history with EV logo

When was the last time you saw a stadium full of people festooned unironically in stars-and-stripes face paint and singing together? If your answer is "never," you haven't been watching the U.S. men's national soccer team work its way through World Cup qualifiers the past few months.

Even though the World Cup finals in Brazil don't begin until next summer, qualification is well underway. Like the Olympics, the World Cup comes once every four years, but qualifying matches begin more than a year before that to determine which of the world's 203 national teams make it into the final 32. 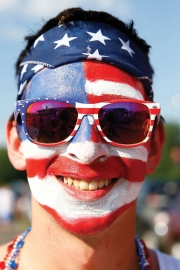 The U.S. is ranked No. 22, yet no team takes the U.S. men's soccer team lightly.
Credit:
Getty Images

For lesser soccer countries (say, Canada or China) the World Cup is already over. Even some legendary powers such as England, France and Mexico have fights on their hands to make it to the finals in 2014.

The U.S. hadn't qualified for the World Cup in 40 years until a group of mostly collegiate players did so in 1990, and the U.S. has qualified for every finals since. Usually for the U.S. this is white-knuckle time in the qualification process, but now the U.S. is in an unfamiliar position: On the heels of a seven-game win streak, we're sitting atop our qualifying group, which includes six teams, among them Mexico, Costa Rica and Jamaica. When qualifying matches resume this fall, only utter catastrophe will keep Team USA from the finals.

The World Cup is unique in that countries compete against each other in one sport and just about the entire world participates. Only Olympic basketball comes close by that measure.

In soccer, the U.S. is ranked No. 22, yet no team takes the U.S. men's soccer team lightly. (The women's team, of course, is a long-time global power.) Before the qualifying matches resume, a second team of U.S. players that happens to include the legendary Landon Donovan, is rolling opponents with relative ease in the North American Gold Cup. That trophy is mostly for bragging rights, but a U.S. win could signal trouble for the Spains, Italys, Germanys and Brazils next summer.

Which brings me back to the face paint, the songs and the "Don't Tread On Me" soccer jerseys. It's funny how the least American of sports is making us more U-S-A "American" than ever before. If you want to see some great soccer as well as some crazy American soccer people, tune in to the next qualifying match that really matters vs. archrival Mexico in Columbus, Ohio, on Sept. 10 on ESPN.