With Consumers Interested in Locally Produced Goods, Marketers Scramble to Get in on a Movement Going Mainstream
READ THIS NEXT
Bruce Willis hypes DieHard batteries (!) and Facebook blocks millions (!!) of ads: Monday Wake-Up Call
The locavore movement is composed of consumers who favor the local farmer and grocer over big national brands.
Credit: Mya Frazier

COLUMBUS, Ohio (AdAge.com) -- With a compass and a map, Lisa Dillman drew a line. Anything grown inside the circle she could eat. Anything outside was off-limits.

The locavore movement is composed of consumers who favor the local farmer and grocer over big national brands.
Credit:
Mya Frazier
Ms. Dillman is not just some eccentric fringe consumer. An avowed "locavore," she is part of one of several disparate movements united in a common theme: local consumption.

Individual approach
Unlike some anti-corporate movements easily dismissed as radical with little chance of resonating with mainstream consumers, these local efforts don't agitate to break multinational brands, big-box retailers, chain restaurants and national grocers' hold on America's wallets. There are no direct boycotts. No protests. No petitions. Locavores simply opt out of buying big national brands to shift market share back to locally owned businesses.

Here's how it works: One day, appalled by statistics such as one from Bill McKibben's book "Deep Economy: The Wealth of Communities and the Durable Future," that the average American meal travels 1,500 miles before it lands on the dinner plate, Ms. Dillman decides she's going to buy only food grown within 100 miles of her home. In San Francisco, Ann Bartz decides she's done buying electronics at Best Buy and will patronize her locally owned computer shop instead.

Though it stems from personal epiphanies, the collective movement is growing. In 52 small towns and cities nationwide, "Local First" campaigns are being waged to draw more consumers.

Not flower children
These are no commune-happy, generation-of-love holdovers. Barbara Duncan, whose group in Fairlee, Vt., has grown to 400 from 25 two years ago, went that route in the 1970s, building a cabin, raising goats and living without electricity for eight years. Today she lives in a typical house and grows almost no food. "It's not just some hippie thing this time around," she said.

Granted, a few hundred people in a relatively small collection of towns isn't a massive buying block that could take down a Kroger or K-Mart. In fact, no true statistics on the might of the buying-local phenomenon exist. Yet, taken together, these disparate efforts could signal the beginning of a consumer revolution that in time could become as pernicious as anti-consumerism.

There are already signs that mainstream consumers are becoming more interested in local sourcing. The memoir from novelist Barbara Kingsolver of her family's year of eating only homegrown or locally bought food, "Animal, Vegetable, Miracle," has risen as high as No. 4 on the New York Times best-seller list. And even as Wal-Mart over the last decade cemented its position as the No. 1 grocer in America, farmers markets boomed from 1,755 in 1994 to 4,388 last year, according to the U.S. Department of Agriculture.

On a shoestring
Ms. Bartz works in San Francisco with the Business Alliance for Local Living Economies, which boasts 15,000 entrepreneurs within 52 "networks," up from just 20 in January 2006.

There is no national marketing budget to fund BALLE campaigns; each town or city has its own logo, and it's a humble effort: bumper stickers, store-window decals, T-shirts.

In San Francisco, Jennifer Maiser, who with three friends coined the term "locavore," runs a blog at eatlocalchallenge.com, where consumers sign up for annual month-long challenges. In August 2005 it drew just 500 participants, but that number grew to 800 in May 2006. Ms. Maiser expects 2,000 for September's challenge.
This cooperative spirit is vastly different from the cage-rattling style of a group like, say, WakeUpWalMart.com, according to Ms. Bartz. "We're kind of giving up on changing big business and instead are focused on taking the business away from it."

Proving its worth
The movement points to several studies to try to prove it can make a big impact on a local economy. A favorite stat: Every $100 spent at a local firm leaves $68 in the Chicago economy, compared with just $43 when $100 is spent at a chain store, according to the Andersonville Study of Retail Economics, published in October 2004. The study also found that for every square foot occupied by a local store, the economic impact topped $170, compared with $105 for a chain store.

So is there any defense for big brands against a mainstream shift toward "local"? Yes and no, according to Michael Shuman, author of "The Small-Mart Revolution: How Local Businesses are Beating the Global Competition."

"Going local is becoming a very important advertising hook," he said, noting that many nonlocal marketers are trying to take advantage of the appeal the concept has with consumers. For instance, HSBC uses the tagline "The World's Local Bank." Mr. Shuman said the buy-local trend is vastly different from the "Made in America" efforts of the past. "That is more of a protectionist mantra and doesn't achieve the goals of localization," he said.

To fight the trend, he suggested big companies seek out local sourcing for goods. "It's a change that's worth it and a way to win consumer allegiance," he said.

The milkman cometh
Indeed, some chains are responding, including the $38 billion Eden Prairie, Minn.-based Supervalu. Go into one of the company's two Sunflower Market stores in Columbus, Ohio, and you'll find old-style half-gallon glass milk containers (yes, just like what the milkman used to deliver) from Hartzler Family Dairy. Sunflower makes sure consumers know it's local and not from some gargantuan factory farm. A green tag explains the milk came from just 97.3 miles away in Wooster, Ohio.

The milk is among a few dozen locally sourced products. But the list is getting longer. With four stores opened and 50 slated to go up in the next five years, Kristen Martin, marketing manager at Sunflower Market, created the "Local Treasures" program. "It really strikes a chord," she said. "The most average customer that you can think of is looking for this. It's not just a niche market anymore. It's the customer walking through any grocery store in America today."

Jon Hauptman of Willard Bishop Consulting, a grocery-industry research firm, said despite the big chains' reactions, the trend "highlights the advantages of being a smaller regional operation and the ability to be more nimble."

Even Whole Foods has had to up its game; it overhauled its sourcing programs in mid-2006. It has also stiffened its definition of local, using the label only if products traveled less than seven hours from farm to store. The chain is offering $10 million in low-interest loans annually to local farmers and has opened up its parking lots on Sundays to farmers looking to sell direct to its customers.

What you need to know to win over a locavore

On a cloudy May Saturday in Columbus, Ohio, the self-described "locavore" is making a meal of almost all local ingredients -- not an easy feat for an unabashed foodie who waitresses at a local restaurant and writes the food blog Restaurant Widow. 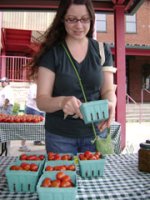 Lisa Dillman
To gather the ingredients, she spent the morning at two farmers markets and a local gourmet grocer. When she finally plates the meal, she not only names each ingredient, she names the place it hails from, sometimes even telling how many miles away the food was grown: "The lettuce is from Toad Hill organic, the bacon is from Blue's Creek farm and the eggs are from Two Silos."

When the subject turns to coffee, Ms. Dillman glances around a bit guiltily. "I know there's a Starbucks cup here somewhere." Although she often buys beans from Stauf's, a local independent, she takes great pains to explain her Starbucks habit. "Those people are geniuses. They always know your drink and know your name. It doesn't feel like I'm supporting some big, evil empire. "

Yet it's not a pure pleasure: "I'm friends with the owner of Stauf's," she said, "and I would feel really guilty if he ever saw me in a Starbucks."