Since Hiring the Agency, King Earned Ad Plaudits but Hasn't Closed the Gap
READ THIS NEXT
Dodge pays homage to history with EV logo

There was no shortage of material. In five years, Crispin's creativity had energized a once-moribund brand with memorable, often groundbreaking work that helped BK recapture the No. 2 spot among burger chains briefly ceded to Wendy's. In the process, the partners had made each other famous within the industry, winning virtually every major award, including a Grand Effie earlier this month. The collaboration has drawn comparisons to some of the most celebrated agency-client partnerships in contemporary advertising.

But there was one fact unmentioned in Mr. Klein's glass-raising: For all Burger King's marketing triumphs, it has lost -- and continues to lose -- ground to its largest and most significant rival, McDonald's. "Burger King is viewed as a tougher competitor now" than it was five years ago, said Ron Paul, president of Technomic, a food-industry research and consulting firm. "But it is chasing a runaway train."

To be sure, the comparison isn't wholly even. Burger King has fewer stores now than it did in 2003, and the chain counters that, if one factors out store closings and openings since then, it would have grown its share of the burger market 0.8%. But even by that measure, it is further behind McDonald's, which gained three full share points during the same interval.

Tough to top
Burger King has posted a handful of quarters in which its U.S. same-store-sales growth inched higher than McDonald's, but because its system is half the size of the Golden Arches,' it would have to roughly double McDonald's sales growth to post an equivalent gain.

The argument can be made, moreover, that BK was at the right place at the wrong time. Eyeing higher profit margins, BK focused its marketing guns on more expensive items targeted to so-called super fans, young men who theoretically care more about how "Meat'Normous" a burger is than how much it costs and who tend to be the most vociferous fast-food consumers. A smart strategy -- until BK got caught flat-footed by a recession that played to McDonald's sweet spot: the value proposition it clearly owned and had honed over decades.

And so the creative approach that put BK on the advertising map for the first time in years seems to have been reconsidered of late as the chain runs spots promoting its $1 Whopper Jr. in heavy rotation. "The mistake BK would readily admit now is that they didn't promote [value]," said Morgan Stanley analyst John Glass. "That's why they're playing catch-up now."

Mr. Klein, for his part, did acknowledge that the brand was late to make its value case, though he stopped short of saying he'd do anything differently. He said the sad state of the brand when Crispin took over required Burger King to re-establish its premium bona fides with consumers before it could start harping on value items. "We would have liked to have had another year or two under our belt [to promote value] given what we had in front of us," he said. "I don't know how we could have gotten a whole lot faster to where we are today."

It is difficult to overstate the challenge Burger King faced in early 2004 when it named Crispin its fifth agency of record in four years. The chain had spent much of the decade up to that point languishing on the sale block while its former parent, British alcoholic-beverage conglomerate Diageo, sought a buyer. It hadn't enjoyed a breakthrough campaign since 1974 when BBDO produced "Have It Your Way," which touted the before-its-time customizability of the Whopper. Its menu offered less variety, and its stores were often dingy and dirty.

Big gorilla
Adding to that challenge was a chief competitor, McDonald's, that has twice as many stores; nearly twice the average sales per store; and according to most industry observers, a stronger franchisee base and better operations, an advantage McDonald's derives in part from having been independent throughout its history, while Burger King has often found itself inside conglomerates, such as Diageo and Pillsbury, that are primarily focused on businesses other than fast food.

Rob Reilly, co-executive creative director at Crispin, recalled sitting at an early franchisee meeting and hearing it announced that the chain had fallen behind Wendy's in market share for the first time. "Burger King wasn't in a great place," he said. "Much of the work [Crispin had done] was just re-energizing the brand."

That, by all accounts, succeeded. To revive the brand's long-buried "Have it your way" equity, it launched a Seinfeld-like TV campaign set in a drab office in which lunch orders were shown as expressions of individuality. It drew more notice than any BK effort had in years. To launch a chicken sandwich, it created the buzzed-about "Subservient Chicken" website featuring a person in a chicken suit and garters who seemed to follow commands typed in by users. It became perhaps the most successful and emulated online viral site ever and arguably created a turning point for online marketing. Crispin also revived the chain's King mascot as a creepy, mime-like figure with an oversized head who eerily appeared in unexpected places, giving the chain not just chatter value but a personality and an identity, even if many outside the brand's narrow target audience found it unsettling and creepy.

(At the time, Ad Age's Bob Garfield offered a not atypical reaction, calling the King "a grotesque death mask with a grin. ... You don't know whether you're going to have it your way or he's going to have his way with you." He later became a believer, stating last week that "apart from Burger King, advertising this year was a black hole worldwide.")

The efforts clearly connected with their young-male targets, so Crispin kept running with it. In 2006, it cast the King in violent video games, and in 2008, he was talking people into trading their Facebook friends for Whoppers. At every step, the chain became more relevant in pop culture and more competitive in fast food, surpassing Wendy's. And the relationship with Crispin blossomed as the agency took a hand in packaging and products such as Chicken Fries, along with creating promotional items such as a Subservient Chicken bobblehead and Flame body spray.

McD's value focus
What the marketing didn't do, however, was get Burger King any closer to McDonald's, which rode the polar-opposite "I'm Lovin' It" campaign created by longtime agencies Leo Burnett and DDB to consistent gains.

McDonald's hasn't broken as much new ground in online marketing or social media, and its U.S. advertising doesn't get much more edgy than a stuffed and mounted fish chiding someone for eating a Filet-O-Fish sandwich, so its agencies haven't garnered as much notice or credit as Crispin has. But the Oak Brook chain's steady focus on the relative value of its premium offerings such as Chicken McNuggets and the Quarter Pounder, in addition to consistent boosting of its Dollar Menu, seems to have helped it grow just as fast as Burger King in boom times and left it on considerably better footing when the economy worsened.

A McDonald's spokeswoman said "marketing and advertising has obviously played a role" in the company's run, but its success has also been fueled by a renewed refocus on consumer insights, store experience and operations, as well as aligning franchisees, vendors and the company with a common goal.

McDonald's agencies officially declined to comment for this story, but executives privately said Burger King's narrow targeting of young men vs. McDonald's wider net has made Burger King irrelevant in McDonald's planning process. "They don't come up a lot," said one agency executive.

Executives at both Crispin and BK bristle at the use of McDonald's as a benchmark for their work, noting that both brands have grown at the expense of the rest of the burger category (if one accounts for BK having shuttered stores). "It's not really a fair comparison, because they're different animals," said Mr. Keller, referring to both the chains' targets and their media budgets. "[McDonald's is] carpet bombing."

Restless natives
But Dennis Lombardi, exec VP at restaurant design and development firm WD Partners, said Burger King's fortunes are more tied to the Golden Arches than execs like to admit, as evidenced by its current attempt to get its value perception on equal footing with that of McDonald's, which holds that crucial high ground during the recession. BK and Crispin have also made aggressive forays into breakfast and coffee, two McDonald's strongholds, with little success.

"A big part of Burger King's problems can be summed up in one word: McDonald's," Mr. Lombardi said.

And those problems are beginning to grate on Burger King's notoriously restive franchisees, who say recent efforts from Crispin have failed to drive traffic to their stores and, even worse, are alienating would-be customers who fall outside the chain's young-male target.

According to Brand Index, Burger King's "buzz" -- a measure of how positively a brand is viewed -- topped out early this year, while Crispin was running its "Whopper Virgins" campaign, and buzz numbers have nosedived since, falling below McDonald's, as controversial efforts such as "Sponge Bob Square Butt" and "Texican Whopper" drew fire from groups who found the efforts offensive to women and minorities.

Several franchisees interviewed for this story said that traffic and sales have spiraled since late March, between 5% and 12%, depending on the region. Burger King has not posted its sales figures, but some operators are blaming the ads. "I don't think we're Carl's Jr.," one multi-unit franchisee said. "We're going after teenage boys, but I think our brand is larger than that. While we may have a larger portfolio of those boys, we don't want to alienate the other customers. It's a risk we've been running, and I think we've been impacted."

The legacy
So where does that leave the BK/Crispin legacy? There's little question the BK brand is in better shape today than when Crispin inherited it, but at the same time, most legendary advertising efforts thrash competitors. TBWA/Chiat/Day, for instance, has helped Apple claim huge chunks of market share from once-indomitable PC manufacturers, while Wieden and Nike barely have U.S. competitors to kick anymore.

"Most people would say it's a top-10 relationship of agency and client [right now]," said Crispin's Mr. Reilly. Asked what was needed to climb higher in the ranks, he said "longevity."

"In the creative era, there were a lot of campaigns that got a lot of attention but didn't move the needle all that much; Mary Wells and Alka-Seltzer comes to mind as an example," said marketing consultant Al Ries. "With Burger King, Crispin has been very good at cutting through the clutter, but it hasn't positioned the brand very well.

"The average person would recognize 'I'm Lovin' It' as McDonald's, but I'm not sure if most people know what to associate with Burger King." 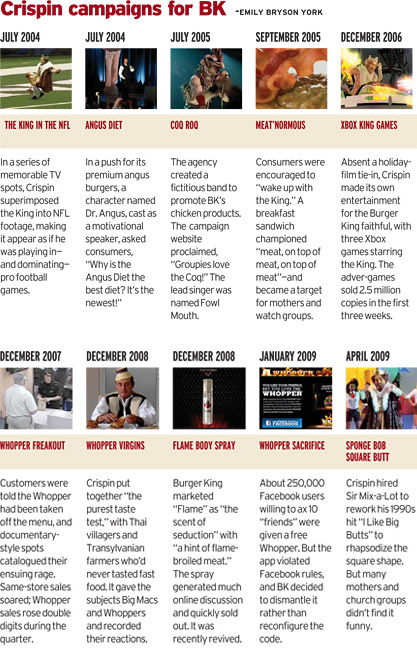