The news last week that 2012 was the hottest year on record was no surprise to food marketers who weathered a crop-scorching drought that might soon be felt at the supermarket, where commodity costs are expected to boost prices. But will this cost pressure force marketers to find savings in ad budgets? The short answer is: maybe. 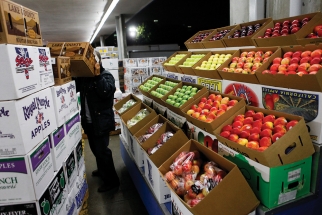 "Most food companies are projecting food inflation for 2013 to be up 3% to 5%," said Edward Jones & Co. analyst Jack Russo, who predicts food companies will "trim marketing costs a bit" and "continue [to] focus on reducing costs throughout the company and raise prices."

So far, however, most big food marketers haven't projected major ad-spending changes. In light of volatile commodity costs, "companies seem to be maintaining a stringent focus on cost management," Morningstar analyst Erin Lash said. But "I haven't heard any companies discuss cutting marketing budgets at this time. From our perspective, investing behind product innovation and marketing support are essential to ensuring that brands stand out from other national players as well as private-label offerings."

Rick Shea, owner of Shea Marketing, said that "budgets appear to be fairly stable," with food companies doing "more shifting than cutting at this time," meaning moving more dollars from print to digital.

Why would last year's drought be felt now? It takes several months for rising costs to work their way through the food system because most companies can hedge against costs in the short term. The U.S. Department of Agriculture said it expects retail food-price inflation to reach 3% to 4% in 2013, "with increases centralized in animal products" such as eggs, meat and dairy. (Average annual food inflation for the past 20 years has been 2.5% to 3%.) Still, Mr. Russo noted that other costs, such as packaging and energy, "are behaving pretty rationally right now" so companies have yet to sound much of an alarm on rising costs.

Executives at General Mills noted on a recent earnings call that it expects to be "at the high end of our 2% to 3% inflation estimate" for its fiscal year, which runs through May. Ian Friendly, the company's chief operating officer for U.S retail, told analysts, "Some of the impact of the drought will weigh on all competitors' minds as we look at what can be done in the market." But he added that stable prices or "very, very modest inflation is probably a decent outlook."