Cereal, Snacks and Even Dog Food Jump on the Trend
READ THIS NEXT
Tesla is Interbrand’s fastest-growing brand of 2021

Are you exhausted? Food marketers think you are.

From cereal to snacks and even dog food, brands are pushing energy as a selling point like never before. The newest buzzword is "sustainable energy," meaning foods that keep you full and fueled for longer periods.

PepsiCo-owned Quaker is among the most aggressive brands trying to capitalize on America's apparent sluggishness. A new campaign includes a TV ad showing people nodding off on buses, at work and at home, while encouraging consumers to fight the "human energy crisis" with the "good energy of Quaker" and its array of oatmeal-based products, from bars to hot cereal. The ads are by the Chicago office of BBDO, which is coincidentally known as Energy BBDO.

"What makes a modern mom different their parents' generation is they embrace the chaos," said Quaker Chief Marketing Officer Justin Lambeth. "They are not looking for the escape moment," he added, but want a good energy source to get them through the day. 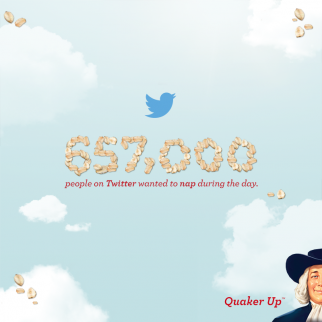 The campaign includes a microsite that tabulates the nation's energy level in real time by scrubbing Twitter for terms like tired, awake, alert and exhausted. On a recent day, the America's energy level was described as "need a nap." The agency behind the site is Organic.

In a paid integration with Mashable, Quaker plans to publish a quarterly "Human Energy Index" that summarizes findings from the site. Quaker is even trying to break the results down by state, saying that so far Louisiana is the most exhausted state, followed by Mississippi, Hawaii, Alabama and Delaware.

Meanwhile, Mondelez International has launched a new campaign called "#MorningWin" for its belVita breakfast biscuits, which are cookie-like in appearance. The effort, by Droga5, includes a TV ad showing a woman powering through a dizzying array of activities thanks to the biscuits, which are touted as being "carefully baked to release steady energy all morning long."

The brand is also calling on consumers to tweet "#MorningWin to @belVita for the chance to get personalized certificates, videos and real and virtual trophies that are "customized to celebrate the specific feat." 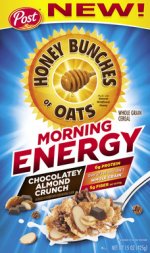 Post Foods has released a new line of Honey Bunches of Oats cereal branded as "Morning Energy" that the marketer says is "packed with whole grain, protein and fiber."

The energy appeals are driven by changing consumer attitudes, said Amanda Topper, a food industry analyst with market researcher Mintel. Rather than looking for a "one-and-done quick energy fix like you might get with an energy drink" more consumers are seeking "sustained energy, specifically from protein and fiber content from foods," she said.

Even dog food brands are barking about energy. Nestlé Purina PetCare recently debuted Prime nutritional supplement bars for pups that are billed as "nutrient-dense, protein-rich" bars meant to be fed to pooches a half-hour before exercise. "He will be able to do what you want him to do for a longer period of time," according to a Purina press release.

The product was launched along with another bar called Refuel that is meant to replenish muscle energy after exercise. The marketer recently promoted the bars at an event in New York City that pitted NFL star Eli Manning and other athletes against dogs in a variety of physical challenges.

Quaker is banking on the power of the oat as a way to win over humans. A spokeswoman cited a study published in the Journal of the American College of Nutrition suggesting that oatmeal produces a greater feeling of fullness and reduction in hunger compared with ready-to-eat cereal.

Such findings are behind a packaging tweak on Quaker Oats that claims the oatmeal "helps keep you full through the morning." In January, Quaker ran full-page "manifesto" print ads in People magazine and The New York Times that asked consumers, "What Would You Do if You Had the Energy?" The ad stated that Quaker doesn't "just want you to enjoy our product; we want you to feel the good energy of Quaker."

Mintel predicted that hot cereal will continue to grow, fueled by its "perceived health benefits and innovations catered to Americans' taste and nutrition preferences." The cold-cereal segment is much larger, but it has struggled to compete with new breakfast options such as yogurt. Category sales fell by 0.7% from 2011 to 2013 ending at $10.1 billion, according to Mintel.

With trends sluggish, some cold-cereal stalwarts are dipping their toes into the hot-cereal category. Kellogg Co. late last year began selling Special K Nourish Hot Cereal, which is described as a multi-grain blend of "superfoods" like quinoa, oats, wheat and barley topped with dried fruit and nuts. One TV ad by Leo Burnett promotes the product as "helping you truly shine."

At Quaker, the new-product pipeline is highlighted by Warm and Crunchy Granola, which the marketer says is a "first-of-its-kind hot cereal" that combines oatmeal with with the "satisfying crunch of multigrain granola."

"Consumers know and understand the nutritional value of oats," Mr. Lambeth said. But "they still think of it as largely contained to a small number of products, like oatmeal," he said. "Our job is to show them the versatility of oats and how we can bring the power of the oat and the energy of oats to consumers in a variety of different products."