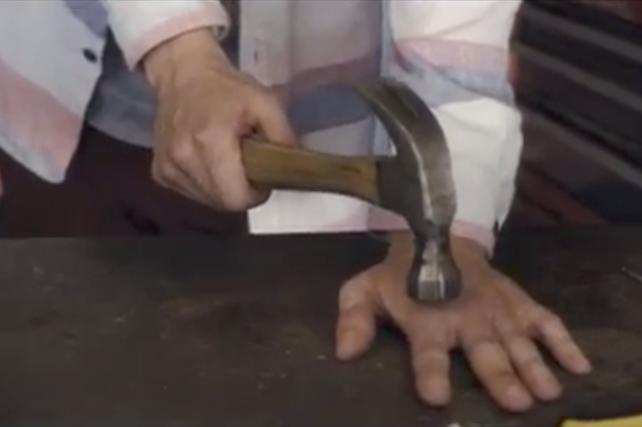 It's hard to watch. That's the point.
Credit:

Welcome to Ad Age's Wake-Up Call, our daily roundup of advertising, marketing, media and digital news. You can get an audio version of this briefing on your Alexa device. Search for "Ad Age" under "Skills" in the Alexa app. What people are talking about today: There's a new White House-backed anti-opioids campaign out, and it's terrifying. One spot is about a man smashing his hand with a hammer. In another ad, a man slams his arm in a door to break it. They're true stories of people who harmed themselves so doctors would prescribe painkillers. Because "those who can't wait for an injury manufacture one instead," Ad Age's I-Hsien Sherwood writes. The ads suggest the violence rather than showing it outright, but they still make you flinch.
As Sherwood writes, the ads are from the Truth campaign, the Ad Council and the White House Office of National Drug Control Policy, along with creative agency Haymaker.
Back in March, President Trump had promised anti-opioid ads that would "scare [kids] from ending up like the people in the commercials. And we'll make them very, very bad commercials. We'll make them pretty unsavory situations." Well, they're plenty scary. Remember the olden days of "Just say no"?

Sunset
It's been over two years since then-JWT chief communications officer Erin Johnson filed a lawsuit alleging racist, sexist and anti-Semitic comments from Gustavo Martinez, who was global CEO of JWT at the time. The suit was settled about two months ago, and Johnson left the agency. In the meantime, Martinez has remained employed by JWT's parent company, WPP, working on "Spanish projects." But as Ad Age's Megan Graham writes, his employment at WPP is now over. WPP said in a statement that "Gustavo Martinez and WPP have agreed it is in the best interests of both parties for him to pursue his career outside the group."
What does Johnson say about all this? Graham writes: "Asked for comment on Martinez' departure, Johnson texted Ad Age a GIF of a sun setting."

But wait, there's more on WPP
WPP shareholders meet next week and will vote on whether to re-elect chairman Roberto Quarta, who has been under pressure since the sudden departure of CEO Martin Sorrell in April. As The Wall Street Journal writes, the vote has been "shaping up as a referendum on Mr. Sorrell's legacy after prominent shareholder-advisory groups recommended that shareholders vote against Mr. Quarta, citing a lack of transparency over the handling of Mr. Sorrell's departure and concerns over succession planning." Quarta told the The Journal he is ready to change things up; he says weaker agencies will be folded into stronger ones or sold if their business can't be improved. And he told The Journal: "We have no sacred cows."

What's up with the Ford review
Ford put its global creative account into review in April. Ad Age's E.J. Schultz has an update on where things stand: "Interpublic CEO Michael Roth confirmed to Ad Age that IPG, whose McCann network handles Chevrolet, is not involved in the review, which formally kicked off last month and is expected to conclude in the fall." Omnicom Group and its creative agency BBDO might be contenders, and Schultz says independent Wieden & Kennedy "could be a wildcard." Ford didn't comment on the review to Schultz, except to say that incumbent WPP was participating.

Just briefly:
Ooops: For 10 days in May, a technical bug caused about 14 million Facebook users to have their privacy settings for new posts switched to "public." Read more from CBS News.

Zut alors: The website of the Association of National Advertisers isn't yet compliant with the EU's strict new GDPR user data regulations, so it's not accessible right now within the European Union, as Ad Age's George Slefo writes. But the group says it will be open to EU traffic within two weeks.

BuzzFeed: BuzzFeed is making changes on its business side and will lay off 20 people, while hiring 45, Recode says. The company also plans to shut down operations in France and lay off 14 employees there, Le Monde reports.

What, no rosé?: Moving the Cannes Lions somewhere else might help fix the festival, writes Lindsay Pattison, chief transformation officer of GroupM and WPP, in Ad Age. (Side note: The Mobile World Congress used to have a different name and take place in Cannes, but it moved to Barcelona in 2006, and everything's OK.)

Papa John's: "Brandon Rhoten, who was pushed out of Papa John's last month as CMO, has landed a job as senior VP and CMO at Potbelly," writes Jessica Wohl in Ad Age.

First kiss: Richard Madaleno, a Democratic candidate for governor in Maryland, kisses his husband in a new TV campaign ad, The Hill reports. The LGBTQ Victory Fund says it's the first campaign ad with a same-sex kiss. "What's the No. 1 way I piss off Donald Trump and the Republicans?" Madaleno asks in the ad, before the smooch. "Take that, Trump." Read more in The Hill.

No FOMO: Don't miss a thing that happens at Cannes Lions, whether you're attending the festival or staying home, by signing up here for Ad Age's nightly Cannes Nightcap newsletter, which will wrap up each day's events Monday through Thursday during the festival.

Creativity pick of the day: It's jarring to pair the classic Salt-N-Pepa song "Push It" with video footage of women giving birth, but also strangely fitting. It's a new Pampers U.K. campaign paying tribute to the work of midwives. Watch it here, and read more by Ad Age's Alexandra Jardine.