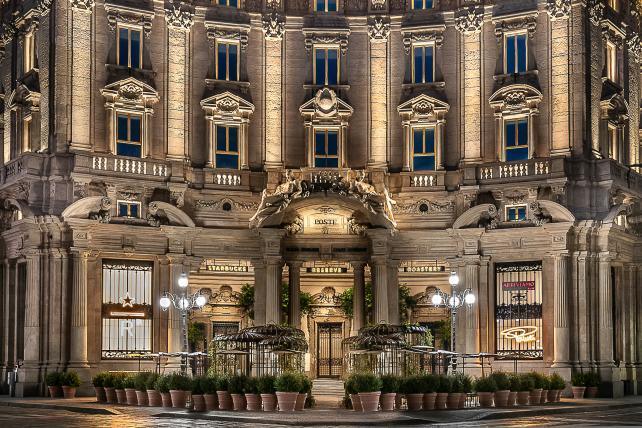 This is a Starbucks.
Credit: Starbucks

Welcome to Ad Age's Wake-Up Call, our daily roundup of advertising, marketing, media and digital news. You can get an audio version of this briefing on your Alexa device. Search for "Ad Age" under "Skills" in the Alexa app. What people are talking about today: Starbucks finally feels ready to open its first outpost in Italy, the country that gave the world espresso and cappuccino. As The Wall Street Journal writes:

"After amassing more than 25,000 coffee shops in 78 countries, Starbucks is coming to Milan with a 'reserve roastery' in a converted post office on a central square near the city's famous Gothic cathedral."

In concessions to Italian tastes, there's no sugary Frappuccino, but there's alcohol on the menu and a brick oven. The opening party Thursday night included La Scala baritone Paolo Ingrasciotta singing "Cavatina di Figaro," from Rossini's "The Barber of Seville." And the shop's portico bears a statue of a mermaid—the company's symbol—which was "completely hand-carved in Carrara marble by Tuscan sculptor Giovanni Balderi," the company says in a news release. The coffee roasters from Seattle seem anxious to get this right. Can you blame them?

Bye
Until yesterday, Twitter was the last major tech company left still giving Alex Jones, the right-wing conspiracy theorist, a platform for his views. Apple, Facebook and YouTube cracked down on him last month, and Twitter followed suit on Thursday by banning him and his Infowars site permanently. (Twitter had recently suspended Jones for a week.) In the end, what was the final straw? As Ad Age's Garett Sloane writes, "Jones harassed CNN reporter Oliver Darcy, and livestreamed the volatile encounter. The video was streamed to Persicope, also owned by Twitter."
CNNMoney writes that "Jones shouted at Darcy for more than ten minutes, accusing him of being in favor of censorship and insulting his appearance, comparing him to 'a rat.'" He also told Darcy he was "evil-looking."
Reminder: In the past, Jones has cast the 2012 Sandy Hook school shooting as a hoax, and the parents of 6-year-old victim Noah Pozner have filed a defamation lawsuit against him. As The New York Times has written, "Mr. Jones for years spread bogus claims that the shooting was a 'false flag,' an event staged by the government as part of an effort to confiscate Americans' firearms, and that the parents of the children killed were 'crisis actors.'"

$100 million?
The board of CBS is in settlement talks with CEO Les Moonves to find a deal on his exit, CNBC reports. It adds:

"While under his contract he is due as much as $180 million in severance and a production deal, the board is offering a roughly $100 million exit package made up almost entirely of CBS stock, sources said. They said the board also wants the right to claw back some of the compensation if it's determined that sexual harassment allegations against Moonves are confirmed."

Confusingly, there are reportedly separate settlement talks going on between CBS and its controlling shareholder, the Redstone family's National Amusements, to end their dispute. There's a lot in flux right now at CBS, where Moonves has been a top exec since 1995. CNBC says Chief Operating Officer Joe Ianniello could be his interim replacement.
The market: CBS shares rebounded after CNBC's report, which Bloomberg News says is "a sign investors have made peace with the embattled longtime leader parting ways" with the company.

Maybe not so controversial, actually?
Nike's much-discussed "Dream Crazy" spot aired during the NFL's Eagles-Falcons season opener Thursday night on NBC. Because it features Colin Kaepernick, the polarizing player who started the anthem protests against social injustice and police brutality, there were calls on social media to boycott Nike; some people even burned their sneakers. But Ace Metrix, which measures the impact of video advertising, says the spot was actually "well-received by viewers, suggesting the social media backlash comes from a small minority."
Ace Metrix writes that "only 13 percent of survey respondents reported they were less likely to purchase from Nike after viewing the ad. That dropped to 10 percent among millennials and just 6 percent among the Gen Z audience." The company says 56 percent of general population viewers reported that "they were more likely to purchase, which is comparable to Nike's recent, noncontroversial ad that pays tribute to Serena Williams."
Also: Pizza Hut, the new official pizza of the NFL after Papa John's abdicated the role, ran an ad during the Eagles-Falcons game too. And as Ad Age's Jessica Wohl writes, it tackles the subject of racial diversity, but "a whole lot more lightly" than Nike. Watch it here.

An unexpectedly hot client
"It might be one of the most unusual reviews in recent history: a bevy of creative hotshops chasing a company that rents industrial equipment," Ad Age's Megan Graham writes. In the end, independent Droga5 won lead creative and strategic agency for United Rentals, beating out WPP's VML, Interpublic Group of Cos.' MullenLowe and IPG's McCann. This particular review for a utilitarian b-to-b client may carry some lessons about where the agency world is at right now. Advertisers are looking for project-based relationships instead of agencies of record, as one expert told Graham. As she writes, that heightens the competition when an agency-of-record opportunity is up for grabs. In this case, she writes, "despite its seemingly unsexy appearance, the review presented contenders with an appealing marketing challenge for a b-to-b client that has more than 1,000 rental locations in North America and employs 16,400 people."

Just briefly:
Goodbye: Burt Reynolds, who died Thursday at 82, was a megastar of the silver screen and TV, and he also starred in some ads too. Check out E.J. Schultz's roundup in Ad Age; don't miss the funny FedEx Super Bowl ad poking fun at ad business clichés (Reynold's co-star is a talking, dancing bear).

On second thought: "The Academy of Motion Picture Arts and Sciences is postponing the introduction of the new 'popular' Oscar category it had intended to introduce at its upcoming 91st Academy Awards on Feb. 24," The Hollywood Reporter writes. The addition of a "popular" category was actually an unpopular move, perceived as condescending to its likely nominees and their fans; the Academy says it will continue discussions about it.

Fakes: "The Federal Trade Commission has shut down a scheme in which operators of fake military recruitment websites tricked people into sharing information that was then sold as marketing leads to post-secondary schools," Ad Age's E.J. Schultz writes.

Toy stories: Mattel "is launching Mattel Films to focus on developing and producing motion pictures based on the company's toy brands," the Los Angeles Times writes.

Putting out a fire: After a backlash, Burberry says it will no longer burn unsold clothes, bags and perfume, The Guardian reports. Last year, the company destroyed $37 million worth of clothes to protect its brand (for fear they'd otherwise wind up being sold at marked-down prices). The company now says it will reuse, repair, donate or recycle the products.

End of an era: Ford is ending all nationwide marketing for the Fiesta, Focus, Fusion and Taurus as it phases out its sedans; read more from Automotive News.

Ellen: Podcast network Wondery has a new show with Ellen DeGeneres called "Ellen on the Go." Wondery's founder and CEO, Hernan Lopez, talks to Ad Age editor Brian Braiker about the podcasting ad landscape. Listen to their conversation on the Ad Lib podcast.

Creativity pick of the day: Adidas' latest ambassador and "brand co-creator" is Donald Glover, aka Childish Gambino. And he "appears in an animated ad that's essentially a follow-up to his new 'Feels Like Summer' video," Ad Age's Alexandra Jardine writes. For this all to make sense, watch the music video first, then check out the ad. Happy Friday.