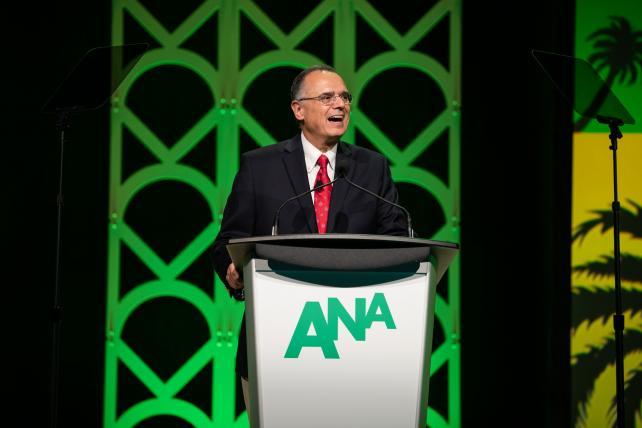 What people are talking about today: Ad Age's team on the ground in Orlando, Florida, has been serving up reports from the annual Association of National Advertisers Masters of Marketing conference in running daily blogs. The first installment is here; the second is just getting started over here. A brief sampling:

• The 'FBI' arrives: Schultz notes that Kawaja closed out his presentation by putting on an FBI jacket, "which at first blush could have been interpreted as a reference to the ongoing criminal investigation into media buying practices, which has agencies under the gun." Find out what FBI actually meant in this context here.

• Quote of the day from the ANA: "Just 25 percent of CMOs' digital media investment reaches target audiences. This atrocity represents more than $20 billion of marketing waste annually and the inefficiency and ineffectiveness that comes with it." —ANA CEO Bob Liodice. Read more of what he had to say on stage here.

And now, industry news from beyond Orlando:
WPP's woes worsen: "WPP stock dropped steeply Thursday after the world's largest advertising holding company posted worse-than-expected results for the third quarter," Ad Age's Meg Graham reports. The culprits in the decline include weakness in its creative agencies and in its North American business, including a string of client business losses.

The Google sexual harassment scandal explained: On Thursday, The New York Times ran a bombshell report on its website under the headline "How Google Protected Andy Rubin, the 'Father of Android'." Key details: An employee accused Rubin of sexual misconduct and "Google investigated and concluded her claim was credible," according to the Times' sources—which is the not-surprising part of the story, because last November The Information reported that "Android's Andy Rubin Left Google After Inquiry Found Inappropriate Relationship." The Times advanced the narrative, though, with details of a stunning payout: "Google could have fired Mr. Rubin and paid him little to nothing on the way out. Instead, the company handed him a $90 million exit package."

The (attempted) damage control: Bloomberg News reports that after the Times story was published, "Google CEO Sundar Pichai sought to reassure employees," in the process offering fresh revelations via an email to staff co-authored by Eileen Naughton, vice president of people operations. "In the past two years, 48 people have been terminated for sexual harassment, including 13 who were senior managers and above," Bloomberg sums up. "None of these individuals received an exit package," Pichai and Naughton told employees.

Divorce proceedings: "Megyn Kelly and NBC News executives are negotiating the terms of her departure from the news division," CNN reported Thursday night. NPR also published a story maintaining that Kellly is leaving the network, citing "a person with direct knowledge of the matter."

Snap judgment: "Snapchat's finally bringing in more ads," Ad Age's Garett Sloane writes, "but that might be turning people away from the platform." The app's parent Snap Inc., released its third-quarter results, showing "a welcome uptick in ad revenue to $298 million, an increase of 43 percent year-over-year." But Snapchat's user base declined to 186 million, from 188 million in the second quarter and 191 million daily users in the first quarter.

Twitter's healthy choices: Sloane separately reports that Twitter is also shrinking, but for more welcome reasons. The messaging app released third-quarter results that showed the monthly active user base dropped from 338 million to 326 million vs. the prior quarter. "However, that's what Twitter's advertisers and investors were expecting," Sloane writes, "since the company has been focused on purging bad actors, harassers and fraud accounts." In a call with Wall Street analysts, Twitter CEO Jack Dorsey called the shrinkage the result of "health initiatives." Meanwhile, ad sales jumped 29 percent year-over-year to $650 million.

Do you have your ticket yet? Ad Age Next, our must-attend event examining the future of marketing and technology, is happening Nov. 13 and 14 in New York. Find out more here.

Go Curry: "GoDaddy taps Ayesha Curry as new spokesperson," Ad Age's Jeanine Poggi reports. "Curry, who got her start as an entrepreneur with a food blog and YouTube channel," she writes, "now hosts cooking shows on Food Network and ABC; owns a restaurant; has her own line of cookware; wrote a best-selling cookbook; and boasts more than 7 million followers on social media."

And finally, our Creativity spotlight: "Johnnie Walker's iconic 'Striding Man' logo is no longer alone. A new campaign from CP&B Brazil depicts the Diageo brand mascot along with other 'Striding Hu[man]s,' in a refresh of its 'Keep Walking' platform." See it here.

Wake-Up Call's Angela Doland is on vacation this week. Simon Dumenco is filling in for her.