Gap Goes Back to Advertising 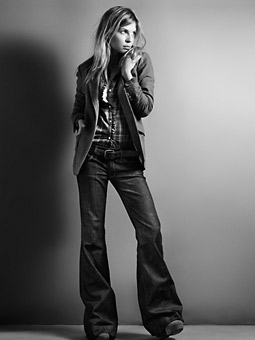 New print ads feature 'style-makers' such as Clemence Poesy
Credit:
Gap Inc.
Gap Inc. CEO Glenn Murphy took a tough stance on advertising this spring, noting that the company had trimmed marketing expenditures 18% during the first quarter of the year and would have no qualms about continuing to pare back if its brands didn't meet certain criteria. They had to have good products and well-run retail environments, and consumers had to be ready to respond to marketing, Mr. Murphy said.

Now, with a fall campaign rolling out for Gap touting the first full collection by new head designer Patrick Robinson, it looks as if Mr. Murphy thinks Gap is on the right track. Gap has not had a brand campaign this year, instead promoting various designer, artist and musician partnerships. The campaign is a "hint [Mr. Murphy] is optimistic about the progress that the brand's merchandise is going to make for the fall," said Mark Montagna, an analyst with C.L. King & Associates. He also noted that Gap has been touting Mr. Robinson, signaling confidence in the new designer.

'More optimistic'
Joseph Beaulieu, a stock analyst at Morningstar, said the company has made no secret that it wouldn't seek to bring people into stores if it couldn't provide good merchandise. "This means they're more optimistic about the merchandise they have in store," he said.

That said, the push is less lavish than what Gap has done in the past. It eschews TV for print, outdoor and online. And while the "Create your own Gap" campaign features a slew of boldface names in the time-honored Gap tradition (the retailer has a long history of partnering with celebrities such as John Mayer, Sarah Jessica Parker, Madonna and Claudia Schiffer to promote its wares), the retailer has enrolled mostly lesser-known "style makers."

"They're probably trying to save some money and probably trying to be a little more niche," Mr. Beaulieu said. "Part of the problem the Gap brand had for a long time -- and still to some degree have -- is they didn't know who they were targeting. They were going after everyone from teenagers to boomers." 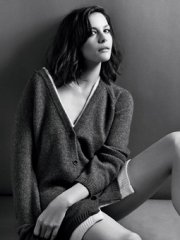 Liv Tyler also appears in one of the ads.
Famous faces
Actress Liv Tyler is the best-known celebrity in the campaign, which also includes DJ Leigh Lezark, editor Cecilia Dean and blogger Scott Schuman. The black-and-white images have taglines revolving around the idea of "your own," as in "Create your own ..." or "See your own ..." The 19 personalities in the campaign each composed responses, and the ads feature their handwriting.

"What we love about this campaign is that it speaks very directly to the ideas of self-expression and individuality," Ivy Ross, exec VP of Gap marketing, said in a statement. "[It] is about creating your own look through mixing and matching pieces that best represent you. It's about conveying who you are and what you stand for through what you wear."