In the latter half of the 1990s, Sharon Stone topped best-dressed lists not once, but twice for her unorthodox pairing of a casual Gap top with a designer skirt at the Oscars. Nearly 15 years have elapsed since then -- years that saw Gap's fashion fizzle and its marketing lose relevance. But early signs indicate the brand may finally retake its position as the arbiter of casually cool, classically American style.

That is , if it wins the next few weeks, which, while important for any retailer, will be particularly telling for Gap. Wall Street has in recent months suggested the brand is back and fashionistas are looking twice. Yet since 2004, Gap has recorded just one December of positive same-store sales in North America.

Despite that pressure, Gap's chief marketing officer, Seth Farbman, was the picture of calm just a few days before Thanksgiving and the official kickoff to the holiday season. Looking very Gap-like in jeans, a white button-down and a charcoal hooded sweater, the former Ogilvy exec talked candidly about how a brand can "forget its own history, its own stories," and why, after years of missteps, Gap is now poised to win, during the holiday season and beyond.

Mr. Farbman was walking through the brand's recently revamped two-level flagship on 34th Street in New York City, which has been outfitted with shop-in-shop displays and updated with massive flat-panel screens that loop branded content. Later, downtown, he showed off the company's Global Creative Center, the New York hub for marketing, design and production.

"I didn't know when I got here what it would be like -- after a lot of hard work and feeling like you weren't making the progress you deserve," Mr. Farbman said of joining the retailer in early 2011.

Mr. Farbman, who worked at Gap's King of Prussia Mall store in Pennsylvania while in college in the late 1980s (his sister was also a regional manager at one point) is clearly passionate about the brand's future, and its past. "I didn't take this job for a job. I took this job because I fundamentally love the brand," he said.

After earning a nod as Ad Age 's Marketer of the Year in 1997, the onetime marketing powerhouse watched its fortunes fade in the 2000s. Trendy designs from fashion darling Patrick Robinson fell flat, marketing was inconsistent and the brand seemed to lack the crystal-clear vision that made it such a success in the first place. Competitors born of the new fast-fashion trend, from Uniqlo to Zara to H&M, pounced.

Gap Inc., which also operates Old Navy, Banana Republic, Athleta and Piperlime, had its stock punished by analysts, who pushed it below $10 a share in 2009. And media outlets, including this one, began to ponder what it would take to "fix" the storied brand, founded by Don and Doris Fisher in San Francisco in 1969.

"Gap brand has been a key issue, and the brand that appeared most challenged [across Gap Inc.]," said Richard Jaffe, a Stifel Nicolaus analyst. "They're getting their mojo back a little bit. ... But in apparel retail, it is a market-share war. There's not going to be an iPad or a game-changing device. So it's really tricky to be differentiated and correct all the time."

Now, it seems the brand is finally delivering. Globally, net sales rose to $1.5 billion from $1.4 billion a year ago during the third quarter ended Oct. 27. In North America, same-store sales jumped 7%, compared with a 6% decline a year ago. The retailer, which makes up 39% of its parent company's sales (about equal to sibling Old Navy's share) has also reported 10 months of positive same-store sales in North America, reversing a trend that saw nine straight months of negative same-store sales. Gap Inc.'s stock has nearly doubled to around $35, year to date.

Mr. Farbman says recent successes -- Gap is careful not to declare a turnaround, as there's still plenty of work to do -- are thanks to a combination of things. The product has improved and new talent has been brought on board. Marketing in stores has been stripped down to large, emotional images. And "community tables" featuring charging stations and the occasional display of baked goods are being added to select stores, in an effort to give customers a place to congregate.

The global marketing platform "Be Bright," introduced a year into Mr. Farbman's tenure, is resonating. It's a filter that 's applied to everything from marketing to merchandising, design to new hires. Internally, execs live by the mantra "believers in bright" -- a nod to the Fishers' desire to have a "store with a heart." Externally, the holiday campaign, "Love Comes in Every Shade," features celebrities, a Gap hallmark, but they, too, meet a certain definition of bright. For example, Michael J. Fox and wife Tracy Pollan aren't just famous faces, they're a couple that 's weathered enormous challenges, Mr. Farbman said.

"It's not terribly glamorous, honestly. We're just getting really fundamental and foundational," Mr. Farbman said. "It's maybe a rediscovery, or a recommitment, to what it truly means to be Gap. That's why I've been so interested in our founders' story. That's why I'm looking at our assets differently."

Mr. Murphy, who hasn't been shy about voicing his opinion when it comes to marketing, has signaled his belief in both "Be Bright" and Mr. Farbman this year. Measured media spending in the first three quarters of the year, before the big holiday boost, reached $40 million. It's a big increase: Full-year 2011 spending notched only $26 million, according to Kantar Media.

Customers trying on the latest brightly colored skinny jeans will find themselves staring at fitting-room walls that have been papered with historical images of the Fishers. Holiday gift cards have been repackaged in larger, more substantial packaging and are being marketed as "the gift card that gives back" with 2% of the purchase price benefiting CARE or Communities in Schools. And the in-store screens create a more "lively" environment, said Mr. Farbman.

"We are a sight, sound, motion brand. Technology creates a better environment, and film drives engagement," he said. "It does require constant development of content. We're not just creating a set of images that sits there for a year."

The aging catalog concept has been reborn as Styld.by , a digital destination where fashion bloggers from popular sites such as Refinery29 and Lookbook.nu style and showcase Gap clothing.

Styld.by is just one example of the brand's efforts in the social-media and digital space. Mr. Farbman has also hired digital experts and community managers to beef up the brand's online presence. During the store tour, new hire Ruben A. Hughes breezed by , taking photos of holiday displays to post on Instagram. Mr. Farbman said the brand has doubled the number of millennials talking about Gap online this year, and it has seen positive sentiment spike online year-over-year. 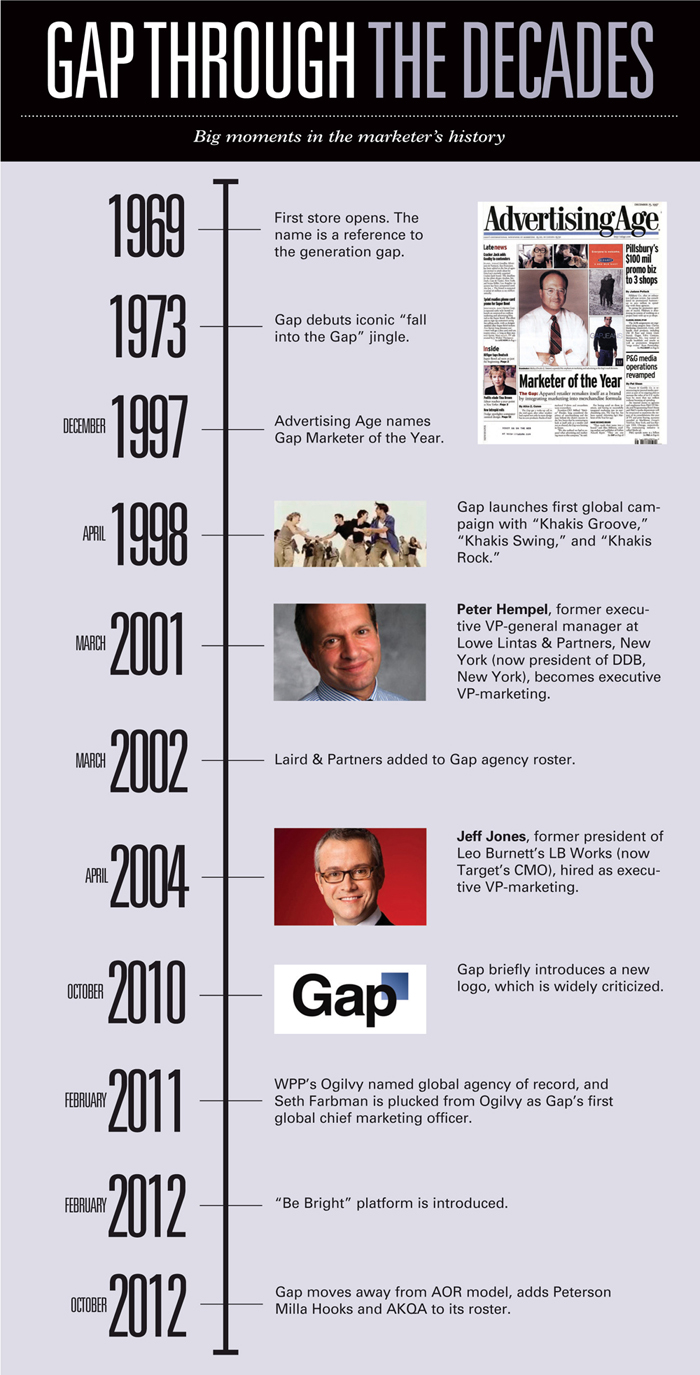 View the Gap timeline in full

"Gap is a brand that needs to be big, confident and proud. It's what's expected of us. We also now need to get very one-to-one and individual," Mr. Farbman said when asked about Gap's formula for success amid a fast-changing media landscape.

To accomplish its goals, the brand is decreasing its reliance on a main global agency, in favor of a roster of agencies tapped on an as-needed basis. Ogilvy was named Gap's global agency in early 2011, though the brand is now also using shops including Peterson Milla Hooks and AKQA.

Taken literally, "Be Bright" has manifested itself in colorful bottoms and candy-colored accessories. For the holiday, Gap has organized gift ideas by color on its website. In-store, there's nary an outfit without a pop of color -- a neon pink shirt hem peeks out from a gray sweater; a vermillion-colored handbag is paired with a muted blazer. In the men's department, casual button-down shirts are organized by size, rather than pattern, creating an artful, functional display.

"They do a great job with color and with casual bottoms, so how nice for them that the world woke up and said we need more brightly colored jeans. We can't forget that being in the right place at the right time is a very good thing," said Mr. Jaffe of Stifel Nicolaus. "The challenge is to adjust to the change and remain, not only appealing, but stimulating and exciting to the consumer each week, month, year."

That said, Mr. Farbman knows that even if the trends are swinging in Gap's favor, the company can't stand still. "It's fortunate and unfortunate when there is a literal expression [of Be Bright]," he said. "We need to build out what it means to be a brand with American optimism and casual style time and time again."