Why (and How) You Should Go After the Gay Dollar

Marketers Get High Grades for LGBT Equality, Giving Them Credibility to Pursue This Brand-Loyal Group
READ THIS NEXT
Ad Age President and Publisher Josh Golden is leaving the publication

CHICAGO (AdAge.com) -- A record 337 businesses scored a perfect 100 on the Human Rights Campaign's Corporate Equality Index 2011, which rates workplaces on LGBT equality. Among Ad Age's 100 Leading National Advertisers, the average score in HRC's report was a strong 86, and more than half of the 100 LNA had a perfect score.

How's a lesbian, gay, bisexual or transgender consumer supposed to choose among so many friends? Here's a perspective on brands and marketers from one gay consumer. 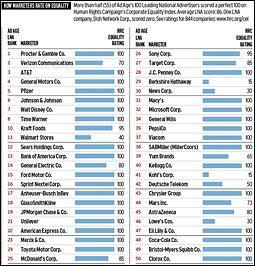 First, a disclaimer: I make no claims to being qualified to speak for LGBT consumers. I never received my copy of the homosexual agenda. My good gay colleague Kevin had to remind me that today is National Coming Out Day. But I have spent my adult life writing about brands and marketing at Ad Age and, in my off hours, being a gay consumer. Given a choice, I'd rather spend money with companies that help, rather than hurt, my community.

How do companies get on, and off, my shopping list? For me, a good starting point is a solid rating from HRC, a prominent LGBT civil-rights organization. I then look for other cues to help narrow the list of marketers deserving of my gay dollar.

Here are five steps marketers can take to make my brand-consideration set.

My partner Kurt and I used to be big Target shoppers: decent prices, style on the cheap, progressive corporate image. But then Target blew its goodwill by 1) donating money to a stridently anti-gay politician and 2) offering a lame we'll-get-back-to-you response when equality proponents protested.

Target 's CEO promised "a strategic review and analysis of our decision-making process for financial contributions in the public policy arena" and said "Target will take a leadership role in bringing together a group of companies and partner organizations for a dialogue focused on diversity and inclusion in the workplace, including GLBT issues."

Because of its blundered actions, Target lost its till-now perfect HRC score. HRC this month said Target hasn't taken any corrective steps to mend its relationship with the LGBT community. Nice job, Target , you just lost the gay market.

2. Stand up for civil rights

I look for companies and brands that stand up for my constitutional rights and support my community. HRC, for example, lists three dozen national corporate sponsors, from American Airlines to Waste Management.

American Airlines is an omnipresent supporter of pro-equality groups, giving it credibility to go after gay travel dollars. (Check out AA.com/rainbow.)

Waste Management? LGBT support meshes neatly with the trash hauler's efforts to position itself as a green, progressive company -- part of the solution, not the problem.

Campbell Soup Co., Kellogg Co. and Johnson & Johnson are among the national corporate sponsors of Parents, Families and Friends of Lesbians and Gays (PFLAG), a group long-revered in the LGBT community.

AT&T, Bank of America and Comcast Corp. are sponsors of Equality California, an equal-rights group.

AT&T and Wells Fargo are national corporate partners of Trevor Project, an organization focused on crisis and suicide-prevention efforts for LGBT and questioning youth.

Nearly 20 years ago, I wrote about The Advocate's breakthrough meetings with Saab and Sheraton, "the first time the magazine has won an audience with car or hotel companies."

Advertising in gay media is less of a statement than, say, sponsoring an equality group. But ads get noticed -- particularly when they have strong LGBT themes.

Warning: Don't advertise if your company has a lousy record on equality. Your brand could get slammed if someone in the LGBT community connects the dots.

What did Home Depot do? "Home Depot sanctions its very own homosexual employee group," said AFA, supports "diversity-oriented organizations" and "sets up Kids Workshops at gay-pride-festival events." AFA said the retailer offers full health-insurance benefits to gay employees and their partners. Home Depot even "responded to an annual survey by the Human Rights Campaign."

Now, Home Depot isn't perfect; HRC scored it 85 out of 100. But that's a solid grade (and it beats Lowe's failing grade of 30). After AFA issued its stellar endorsement, Kurt and I made a special trip to Home Depot. We'll keep spending money there (as long as Home Depot continues to embrace diversity and keeps "doing the right thing," one of its stated core values).

5. Do the right thing when no one is looking

At a West Hollywood rally on the day that California's gay marriage ban was ruled unconstitutional, one speaker said his children couldn't be at this celebration because they were visiting grandparents on the East Coast. He mentioned as an aside that American Airlines' Rainbow Team had stepped in with an offer to fly the kids home. That drew huge applause. When was the last time your brand received a standing ovation?

If you want to connect with gay consumers, where to start? First, see where your company ranks on the HRC index, which rates American workplaces on LGBT equality. If you're not ranked, contact HRC to see how you can get your company listed in its next report.

Next, ask your human-resources department if the company has an LGBT employee group. Your lesbian and gay colleagues can offer candid advice on where your brands fit in with the LGBT market.

If your company has a good story to tell, by all means make a play for the gay dollar. Gay consumers are both brand-conscious and brand-loyal, and they -- we -- are open to hearing your pitch.

But remember that you need a winning product. Bank of America's involvement in the LGBT community doesn't overcome the bad customer service that prompted my partner and me to ditch our BofA credit cards.

Likewise, I respect American Airlines' savvy LGBT marketing, but I think its in-flight service is just average -- nothing special in the air. I prefer to fly Southwest because I like its low fares, no-frills style and corporate culture. (Southwest scores 95 on HRC, supports Gay & Lesbian Alliance Against Defamation and advertises in gay media.)

And then there's Sears Holdings Corp. As a journalist, I watched the fall of Sears (once the nation's largest retailer) and the rise and fall of Kmart. A year before the companies merged in 2005, I wrote an essay arguing for that merger. I want to believe in the company, which scores 100 from HRC. So when Kurt and I stopped shopping at Target , we paid our first visit in years to the local Kmart.

What a letdown. The aging store was dingy and depressing. It looked like Sears Holdings Chairman Edward Lampert had not bothered to invest a dime in that store.

I applaud Sears Holdings' stated belief that "diversity is a business imperative." At the company's website, I learned that its gay employee group intends to work with "multicultural marketing to develop a targeted marketing test to a segment of the GLBT consumer community."

But none of that matters if you have a second-rate product. Kmart won't be the new gay-mart.