Beer Goes on Passage to India

Is India ready for the High Life?

In the nation where Mohandas Gandhi once campaigned against alcohol, big global beer marketers are getting more aggressive as rising incomes and falling social stigmas fuel new appetites for brews.

Anheuser-Busch InBev recently launched Budweiser Magnum, a super-premium and darker-colored version of the King of Beers aimed at urban drinkers. SABMiller is targeting working professionals with Miller High Life, marketed as an upscale brand in India. And the brewer this month launched a premium Indian brand called Indus Pride, calling it the first beer with "authentic Indian spices," including citrusy cardamom and spicy fennel varieties. Heineken, meanwhile, has started brewing its flagship brand locally in an effort to avoid costly import tariffs. 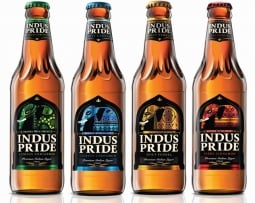 SABMiller has launched Indus Pride, a beer line flavored with Indian spices such as cardamom and fennel.

To be sure, the beer market has a long way to go in a nation where local spirits brands have traditionally dominated. Annual beer consumption per capita is below two liters, which is a lot less than other Asian markets, such as China (more than 35 liters) and Hong Kong (22 liters), according to Euromonitor International. Yet consumption is growing faster than spirits and wine, and by the end of 2012 the beer market in India will account for almost half -- 46% -- of total alcoholic drinks volume sales, according to Euromonitor. (The Canadean Global Beverage Forecast pegs beer's share in India much lower, at 23% of total alcoholic beverages in 2012.)

India-based UB Group remains the dominant beer player by far with its Kingfisher brand, which has 46% volume share, according to Euromonitor. But Western brewers see promise in the expanding market.

The growth is driven by college-going young adults and professionals ages 18 to 40 who "consider it more fashionable to drink beer than consume brown spirits," the report stated. Also, more women are drinking beer. That's a major shift for a country where female drinking was once frowned upon. Indeed, Indian soap operas and Bollywood movies often show female villains drinking alcohol "as a reflection of their unattractive behavior," said Sunitha Barlota, a Euromonitor analyst. But acceptance is growing in urban areas, where educated women are drinking socially and bars are even hosting ladies' nights.

There are a thicket of regulations to navigate. Each state enforces its own rules, taxes and legal drinking age, which runs as low as 18 in the state of Goa to 25 in Maharashtra. Gujarat, Gandhi's birth state, remains dry.

TV advertising for alcohol is banned across India. But companies get around the rules with so-called surrogate advertising in which marketers sell bottled water, compact discs and other goods emblazoned with booze brand names as a way to raise awareness. SABMiller, for instance, advertises "Miller Time " clocks for High Life, which was introduced last year and is positioned with a work-hard, play-hard mentality.

A lot of the attention is on India's "strong beer" segment, which generally refers to beers ranging from 5.1% alcohol by volume to 8%, and accounts for some 80% of the market, according to brewers. (Bud Light in the U.S. has 4.2% ABV.) But rather than talk about a beer's alcohol strength, SABMiller recently shifted strategy, using the tagline "strengthen your resolve" for its top-selling Indian brand, a strong beer called Haywards 5000. The message pushes the notion that people drink beer -- even strong beer -- to remain in control, vs., say, doing a shot of whiskey.

AB InBev launched regular Budweiser (with 5% ABV) in India in 2007. Bud Magnum, which is 6.5% and is only sold in India, entered the market in June in four major metro areas -- Mumbai, Delhi, Bengaluru and Hyderabad -- which account for 25% of the nation's beer drinkers.

It is also the most expensive beer in India, priced at least 2.5 times more than Kingfisher, according to Euromonitor. Ricardo Marques, Budweiser's global ad director, said the brew is aimed at India's "rising class of young achievers that work hard and also like to celebrate." Carlsberg, which entered India in 2006, last year launched its premium Carlsberg Elephant beer in India, positioning it as "the new royalty of strong beer."

Heineken is betting that drinkers will eventually dial down the alcohol content even more over time. Brand Heineken is 5% ABV, putting it into the mild category in India, where the brewer partners with UB Group.  "We believe [habits] will change in the long-run and [be] led by health consciousness," said Laurent Odinot, Heineken's marketing manager for Asia Pacific.