On Twitter, the president calls on the automaker to open an assembly plant in Ohio that it no longer owns and make the devices there immediately 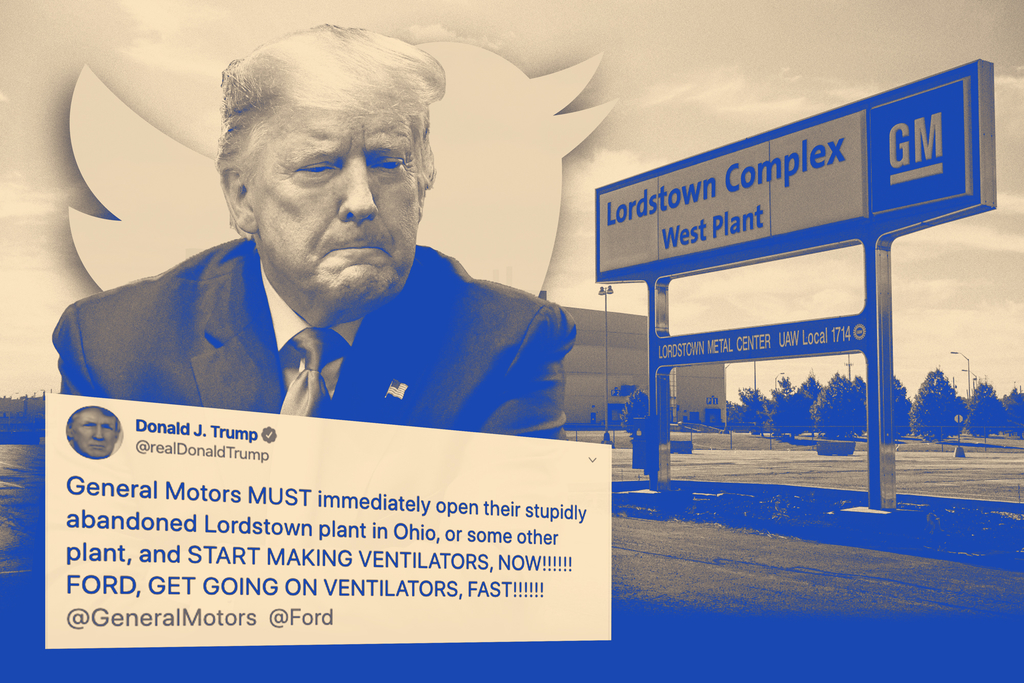 General Motors and its ventilator partner Ventec Life Systems had much of what they needed in place to ramp up production of breathing machines that would help coronavirus patients survive and recover. They were just waiting on the Trump administration to place orders and cut checks.

And then, just as frustration was mounting within the largest U.S. carmaker and its partner over the federal government finalizing the details, President Donald Trump went on the attack Friday. He accused the company of moving too slowly and charging too much, specifically criticizing CEO Mary Barra.

As usual with “this” General Motors, things just never seem to work out. They said they were going to give us 40,000 much needed Ventilators, “very quickly”. Now they are saying it will only be 6000, in late April, and they want top dollar. Always a mess with Mary B. Invoke “P”.

The Twitter attack is a remarkable turnabout from the night before, when Trump told Fox News he wasn’t invoking the Cold War-era Defense Production Act to compel manufacturers to make ventilators because companies including GM had already stepped up.

On Twitter, Trump also called on GM to open an assembly plant in Ohio that it no longer owns and make the devices there immediately.

General Motors MUST immediately open their stupidly abandoned Lordstown plant in Ohio, or some other plant, and START MAKING VENTILATORS, NOW!!!!!! FORD, GET GOING ON VENTILATORS, FAST!!!!!! @GeneralMotors @Ford

GM was growing exasperated with the Trump administration because after more than a week of around-the-clock work, the carmaker and Ventec had turned an auto-parts plant in Kokomo, Indiana, into a near-ready ventilator-assembly facility. Suppliers are secured for the 700 components needed to make the machines. The automaker has even started hiring because the 300 workers on staff won’t be enough to handle the proposed volume, a person familiar with the situation said.

The holdup now is that the federal government hasn’t decided how many machines it will need, how many producers it will hire and, by extension, how much it will have to pay Ventec. Originally, the two manufacturers were talking about $250 million that would go to the Seattle-based company and its components suppliers to get production moving, said people familiar with the matter, who asked not to be identified because the project hasn’t been finalized.

GM has been moving ahead as if production will begin in April. Ventec and the automaker are planning to build 200,000 ventilators and begin shipping them by the end of next month, the people said.

The Detroit-based carmaker will be a contract manufacturer for Ventec as part of a venture the two companies announced March 20.

Ventilator supply is a vital issue in the struggle to treat people unable to breathe properly because of COVID-19, the disease caused by the coronavirus. Hospitals across the U.S. are running short on the machines already, and many areas of the country are expected to see cases continue to grow rapidly.

UPDATE: GM issued this statement via Twitter this afternoon:

Our teams have been working tirelessly with @MyVOCSN to produce critical care ventilators at our Kokomo, IN facility. Retooling is underway and we are poised to deliver the first ventilators next month with capacity of more than 10,000 monthly. https://t.co/34Here89Fa pic.twitter.com/vxZvSzHveb