Forget Golf: If You Want to Get in Good With C-Suiters, Sign Up for a Triathlon | Ad Age
Skip to main content

Forget Golf: If You Want to Get in Good With C-Suiters, Sign Up for a Triathlon

With Intriguing Demographics, This Is the Sport to Win
READ THIS NEXT
More Super Bowl advertisers line up as Bucs set to face Chiefs, and RIP Larry King: Monday Wake-Up Call

Andrew Katz is a 35-year-old married father of three. He's spent thousands of dollars on sports drinks, nutrition bars and athletic gear. He's co-founder and principal of Prusik Group, a New York-based retail-real-estate firm, where he's more likely to suggest a bike ride than a golf outing to colleagues.

In short, he's your average triathlete.

According to a study initiated by USA Triathlon, the average triathlete is a married 38-year-old with an income of $126,000. Forty-four percent have kids living at home; 60% are male. They spend in excess of $4,000 annually on bike gear, athletic footwear, race fees and nutritional supplements. Nearly half have traveled more than 500 miles for a race. 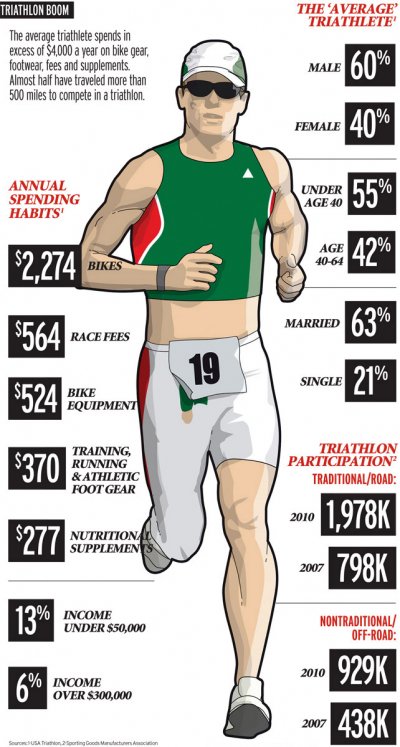 The demographics are intriguing. Factor in the explosive growth the sport is seeing, and it's enough to make any marketer look twice.

An estimated 2.3 million people completed a triathlon last year, a 55% increase over the year before, according to a recent report from the Sporting Goods Manufacturers Association. Likewise, the number of races has more than doubled to 3,486 sanctioned events in the last six years. (Even so, races are often mobbed -- next year's New York City Ironman sold out in 11 minutes, despite an $895 price tag, the highest entry fee in the sport.) Last month USA Triathlon announced it had reached 900 official clubs, with more than 140,000 members, nationwide.

Mr. Katz, who completed his first IronMan in July, co-founded one of those clubs, Mapso Tri, late last year. "We figured we'd have 10 or 12 people the first year. Eight months in, we've got 63 members," he said. "These are bright, driven people. They're Type A with good jobs and most are making good money. They're looking for something else, whether it's to blow off steam or have some "me' time."

Indeed, triathlons are fast becoming the new sport of C-level executives, said Chuck Menke, director-marketing and communications at USA Triathlon. "People are going from the boardroom to their bike or pool, instead of the golf course," Mr. Menke said.

The triathlon is the fastest-growing sport in the U.S. Olympic movement. It's also one of the youngest. The first modern triathlon was held in San Diego on Sept. 25, 1974, and the sport made its Olympic debut during the Sydney Games in 2000.

It's no surprise then that USA Triathlon is in the early stages of its development, from a marketing and sponsorship perspective.

Brands like Blue Competition Cycles, Tyr and Garmin are key sponsors, but many sponsors are smaller, niche brands like Gu, BodyGlide and Fuel Belt. Gatorade is the organizations' longest standing sponsor, at more than 25 years. Tom Prochaska, director-sports marketing at Gatorade, says it's been "thrilling" to witness the sport's growth rate. This summer, the brand featured Chris Legh, a two-time Ironman Triathlon Champion, in its "Endurance" campaign, promoting the G Series Pro line of products.

"[Our demographic] is right in the wheelhouse for Madison Avenue," said Mr. Menke. "Historically we've done a wonderful job of capturing the endemic market. What we're seeing now is more interest from non-endemic sponsors."

Avis is one example. The car-rental company experimented with a one-year sponsorship this year and, pleased with the results, is now pursuing a new two-year contract. Individual events are also seeing increased interest this year. Saucony was the presenting sponsor for the Collegiate National Championship in Tuscaloosa, Ala., while Subway was the presenting sponsor for the Age Group National Championship in Burlington, Vt. Subway spokesman Jared Fogle handed out finisher medals to top athletes and hosted a lunch.

"If that sort of success can translate, in the nonendemic sense, that represents a whole new ballgame," Mr. Menke said. "My marketing philosophy moving forward is to have fewer, more meaningful sponsorships, as opposed to smaller one-offs. We're trying to cull the herd, get rid of some, fold some of the categories and add some categories."

If what's happening on the local level is any indication, sponsors are going to be flocking to the sport. Mr. Katz's fledgling club already has 11 sponsors, including a local sports retailer, a wetsuit brand and a sports rehab center. "Our little club was able to go out and get some really nice sponsors," he said. "People were eager to jump on it."