Plus news about Nike, Netflix and Lego
READ THIS NEXT
Katzenberg’s Quibi mulls sale after growth sputters, WSJ reports 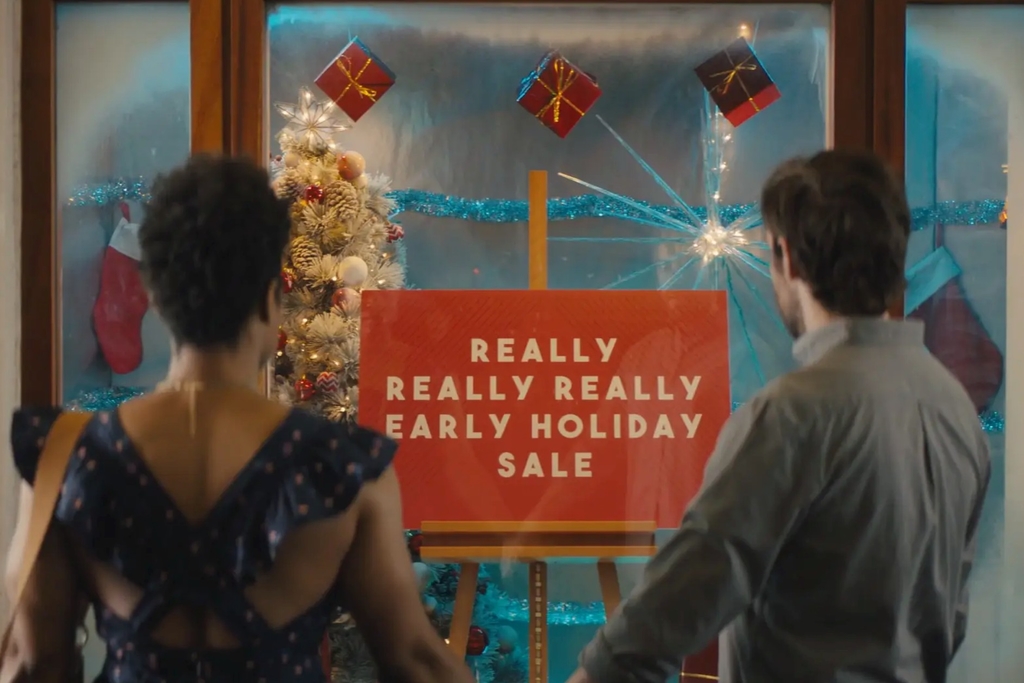 It’s the most wonderful time of the year (yes, already)
There are 99 days to go until Christmas, and the holiday-marketing onslaught is already starting up, as Adrianne Pasquarelli reports. A spot from eBay makes fun of stores that hang wreaths in mid-September, and the online marketplace also pledges not to run any holiday promotions or ads until November. "Get deals every day," the ad says. "Not just the holidays."

But there’s another way of looking at eBay’s video—basically, it's an early holiday ad in disguise. The video from eBay and Edelman is full of imagery of evergreens and shiny red packages, and it seems like a tactic for getting people to associate the brand with end-of-year gifting before other retailers make their own holiday push. We’re calling it: Sorry, eBay, but you’re as guilty of encouraging “Christmas creep” as everybody else.

Amazon’s algorithm
Did Amazon tweak its search algorithm? The Wall Street Journal reports that last year Amazon “adjusted its product-search system to more prominently feature listings that are more profitable for the company.” The move could boost Amazon’s own private-label brands, which are designed to bring better profit margins for Amazon in categories from clothing to household necessities, The Journal says. The report, which quoted unnamed sources, says there was internal debate about the change, with engineers worried about not acting in customers’ best interests and lawyers rejecting an initial plan because of antitrust concerns.

“We have not changed the criteria we use to rank search results to include profitability,” Amazon tweeted. “We feature products customers want, regardless of whether they are our own brands or products offered by our selling partners.” What’s undeniable is that Amazon’s own brands are getting more visible: Try searching for “tissues” and count how many of Amazon’s own products come up alongside Kleenex and Puffs.

And the Emmy goes to Nike
Nike’s “Dream Crazy,” featuring former NFL star Colin Kaepernick as narrator, won yet another award—this time for Outstanding Commercial Award at the 71st Annual Emmy Awards. Read more by Ad Age’s Ann-Christine Diaz, and look back at the Wieden & Kennedy spot’s prizes at the Cannes Lions International Festival of Creativity. Ad Age also named Nike 2018 Marketer of the Year after its bold move to cast Kaepernick, a polarizing figure who led the NFL’s protests against racial injustice and police brutality. The ad started a "conversation about the role brands should—or should not—play in tackling societal issues," Ad Age wrote at the time. It's a year later, and that conversation is still going on.

Just briefly:
Yada yada: Netflix snagged “Seinfeld.” Bloomberg News writes that the deal shows “Netflix still has options to acquire popular library content even as Disney and AT&T Inc.’s WarnerMedia pull back their most popular content to focus on their own streaming services.”

Podcast of the day: Ad Age’s “Ad Block” podcast, hosted by I-Hsien Sherwood and Alfred Maskeroni, invites ad agency folks to chat about life outside of work. Up this week: Sarah Watson, chairman of BBH New York and global chief strategy officer at BBH, talks about the experience of giving birth at home. Subscribe on iTunes or Spotify.

Campaign of the day: Lego is launching its first global brand campaign in three decades (if you don’t count Lego’s movie franchise.) As Ad Age’s Alexandra Jardine writes, the campaign from Lego and Paris-based agency BETC takes on issues including climate change and gender roles. In one outdoor ad, a bride carries a groom across a threshold. The tagline is “Rebuild the world.”