A Visit to Madison Ave.'s Potential Future at Brooklyn's City Tech
Students in the Ad Design and Graphic Arts division of New York City College of Technology are (left to right) Jason Williams, 23; Zaheer Gobindpersaud, 24; and Sopheap So, 21. | ALSO: Comment on this article in the 'Your Opinion' box below.
Credit: Sebastian Mlynarski

NEW YORK (AdAge.com) -- It's only four miles from Madison Avenue, but the New York City College of Technology is a world away -- which is odd, considering that it has something that the ad industry desperately needs 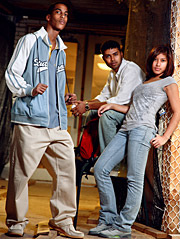 Students in the Ad Design and Graphic Arts division of New York City College of Technology are (left to right) Jason Williams, 23; Zaheer Gobindpersaud, 24; and Sopheap So, 21. | ALSO: Comment on this article in the 'Your Opinion' box below.
Credit:
Sebastian Mlynarski
Diversity issues
Diversity issues have plagued the major ad agencies but have never been a problem for City Tech, located in downtown Brooklyn. The ethnic makeup of the school, including its Ad Design & Graphic Arts division, is almost the direct opposite of the advertising industry: 11% Caucasian, 15.6% Asian, 28.2% Hispanic and 38.5% black. More than 40 native languages are spoken among the students, including 5% who speak Chinese. In fact, U.S. News and World Report named City Tech the most diverse school in the country for two consecutive years beginning in 2003.

But in lacking the reputation and name recognition of its Manhattan contemporaries -- NYU, Parsons, Pratt -- City Tech has overcome as many obstacles as its students to establish itself in the industry.

Recognition gap
"Even though our students are working in key positions in every facet of this industry, nobody waves the City Tech flag, nor does it have any kind of recognition," said Lloyd Carr, City Tech's director of graphic arts. "I worked for four years next to a person that graduated from this college and I never knew he even went here until I gave my resignation."

Said Sopheap So, 21, a student who lives in the Bronx: "My dad thought I went to Brooklyn College. He was filling out a tax form, and I had to remind him I went to City Tech."

While City Tech students may not brandish their school's letters, their job placement speaks for itself. The ad division has students working everywhere from The New York Times to DraftFCB to Leo Burnett -- and not always as interns. 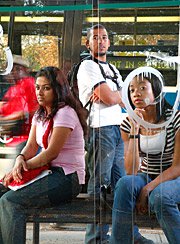 Color-Blind Approach
Senior Karen Padavatton, 22, was able to parlay her design internship with Chloe Foods over the summer into a job, working part-time until she graduates in June. "I couldn't ask for anything more right now," said Ms. Padavatton, who came to New York from Guyana in 1998.

Those who don't have anything lined up remain hopeful. Sophomore Nigel McBean, 19, has dreams of being an art director for a major publication and knows his hands-on experience should land him a good internship. The fact that he is African-American doesn't even factor into his job outlook.

"It's all based on skill. If you're a good designer, I don't feel your [ethnicity] is going to affect you personally," he said.

Plus, he said, with the advent of e-portfolios, agencies aren't aware of an applicant's ethnicity until they show up for an in-person interview.

That color-blind approach is one that seems to be shared by the school's student body. Sophomore Athena Valentine, 19, read in the Times about the diversity controversies faced by agencies but hasn't seen any employment struggles in her neighborhood.

'Can be done'
"Everybody I know or live nearby is colored," said Ms. Valentine, who is African-American. "I believe breaking into the industry can be done." Ms. Valentine's greatest worry isn't her skin color but how her skills measure up to those of other talented designers. "People are always going to need a graphic designer. There's no need to really worry about that."

Agencies, while quick to wave off charges of discrimination, are willing to acknowledge the lack of diversity plaguing the industry.

"We believe as an industry we could be doing better at attracting and retaining a broader mix of talent," said Lisa Rascona, senior VP-director of human resources at DraftFCB, New York, in an e-mail. "Diversity -- whether in culture, education, background or experience -- allows the broadest thinking that translates into the most innovative and relevant solutions for our clients."

FCB's recruitment
Long before merging with Draft Worldwide this year, FCB hired City Tech student Nasser McMayo as an intern in 1996 after much coaxing from professor Bob Holden. Mr. McMayo's semester-long internship led to a full-time position as an art director with the agency and helped forge an active recruitment relationship with City Tech.

Senior Ayesha Mahmood works as an intern in the production department among a "very diverse" staff. " I haven't seen that it's all male, white employees, which is nice," said Ms. Mahmood, who is from Pakistan. She is much more focused on excelling at her job. "Everything I do here I learned from my graphic-arts classes, and little by little I'm learning more. I can apply this."

"We just need the door to be open," Mr. Holden said.

The 'portfolio schools'
While more opportunities are available to City Tech students than ever before, they still have a ways to go in establishing an identity to recruiters. Amy Hoover, exec VP of advertising recruiter Talent Zoo, said she never heard of City Tech when called by Advertising Age.

"When it comes to the creative side of business, the schools that get the most attention are the portfolio schools," said Ms. Hoover, citing Miami Ad School, the School of Visual Arts in New York and the University of Texas-Austin as prime examples. She typically considers a student's school and portfolio simultaneously when reviewing job applicants. "You almost know what to expect based on the school when looking at the portfolio. But if it's exceptionally better than what you're used to getting from the school, that would be noteworthy."

If it's not on every recruiter's radar just yet, City Tech is willing to take at least part of the blame. Joel Mason, chair of the school's Department of Advertising Design & Graphic Arts, said the school has been involved with the American Association of Advertising Agencies' internship program in the past and should probably look into working with it again, in addition to establishing deeper relationships with other agencies that have provided students with job opportunities.

Outreach on both sides
"I think there needs to be more of an outreach on both sides," he said. "The agencies are tougher to crack and seem to want several years of experience. Some students will come back and say they're having a hard time, but again, sometimes students who have stronger portfolios may get a stronger response."

"New York is really competitive," said Cesar Ferrand, 26, who is originally from the Dominican Republic and who now lives in Laurelton, N.Y. "I might move to a smaller city or maybe start work here and work my way up."

It can be done -- with a little coaxing. "Getting through all the red tape is hard enough," Mr. Holden said. "These students are hard workers; they have so much energy. Some are immigrants, some come from poverty or broken families. It makes them tougher, makes them work harder."

Ms. Valentine, for one, is steadfast. "I know to make it in this industry: I'll have to work hard. But agencies know beautiful when they see it."