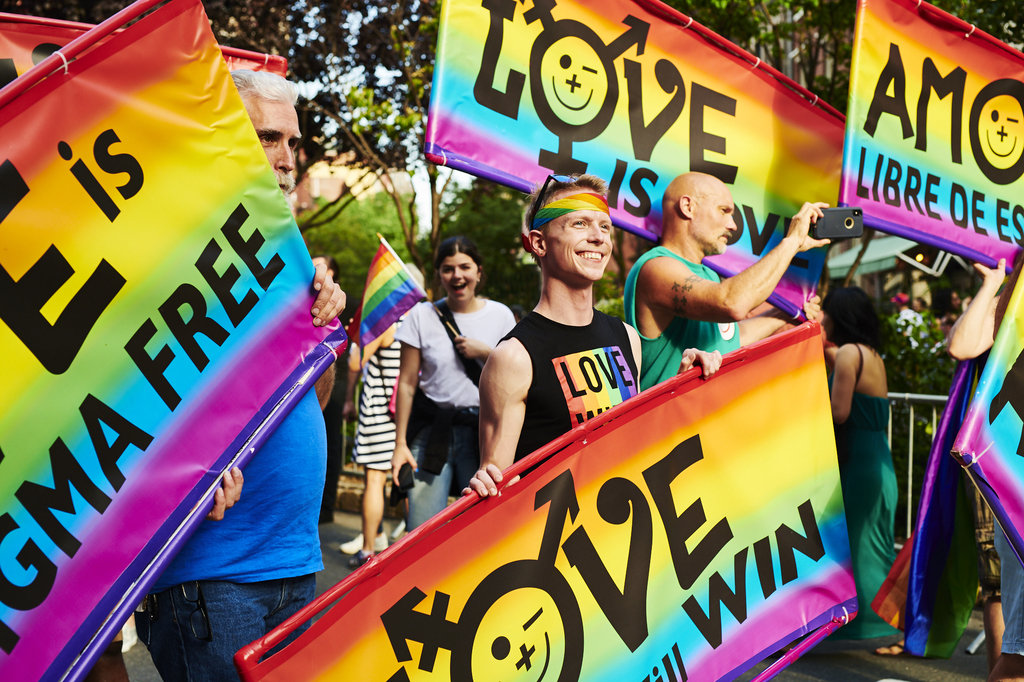 What people are talking about today:
Pride month culminated this weekend with New York City’s biggest ever Pride parade and this year more marketers and brands were seen than ever before. As tens of thousands of people marched in New York in recognition of the 50th anniversary of the Stonewall Uprising, a host of brands and agencies supported the LGBTQ+ community: read Ad Age’s Lindsay Rittenhouse’s Agency Brief roundup here.

There were also branded floats from the likes of Amazon but not everyone was impressed with the commercialization of Pride. In Central Park, the Gay Liberation Parade protested how corporate the New York parade has become, with message boards like “Queer liberation not rainbow capitalism” (as Ad Age showed on Twitter). As the New York Times reports: “The organizers of the dissident march criticized the Pride march as having become essentially an advertising showcase for floats sponsored by major corporations that distracted from the message of Stonewall.”

'Woke washing'
Perhaps inevitably, Pride month also saw some brands deliver clanging examples of what’s now being dubbed “woke-washing," with campaigns that not only missed the mark but offended the very audience they were trying to court.

As Ad Age’s Ilyse Liffreing reports, these included Kohl’s, with an online store of Pride merchandise that didn’t feature images of same sex couples; the Phillies, which held a special Pride night in Philadelphia but displayed billboards for Chick-fil-A (a brand infamous for its CEO’s anti same-sex marriage remarks in 2012) and Chipotle, which was selling a $20 “Homo Estas?” (Translation: "Are you gay?") shirt, offending some consumers. Lessons to be learned for next year, perhaps.

Election promises from Facebook
Facebook has taken yet more pre-emptive steps to protect itself against accusations of not doing enough to stop political interference.

COO Sheryl Sandberg announced in a blog post Sunday that the company has launched a civil rights task force and election-monitoring center to protect against interference in the 2020 election campaign, as well as the 2020 census. Sandberg said the company “will work with voting-rights experts to make sure key members of our election team are trained on trends in voter intimidation and suppression so they can remove this content from Facebook more effectively.” And, for the census, it will use artificial intelligence to protect against misinformation.

Coincidence?
Subway took out a full-page ad in the New York Times this weekend celebrating "world-class franchise owners." Just as the Times ran a major investigative article entitled "Subway got too big. Franchisees paid a price."

The in-depth piece alleges that some Subway franchise owners have been deliberately targeted for closure by company inspectors over minor faults—something refuted by Subway in an email to the Times. The ad, (tweeted by Ad Age's Jessica Wohl), says: "Celebrating 54 years with the best customers, world-class franchise owners and greatest Sandwich Artists in the world! Looking forward to the next 54 with new restaurant designs, new innovative menus and more to come. Thank you all!"

Prime opportunity: Amazon is encouraging brands to take advantage of new streaming opportunities for Prime Day, reports Ad Age's Garett Sloane. Amazon-owned Twitch announced Friday that it will "sell out" by opening up its live-stream channels to home-shopping-style programming.

'Overhyped?': The Verge reports that a senior BMW board executive, Klaus Fröhlich, told reporters this week that the shift to electric cars was "overhyped." and that there was "no consumer demand" for them. But, embarrassingly for the automaker, his remarks took place at a company event promoting its new range of electric vehicles.

Podcast of the week: Get to know more about The Martin Agency CEO Kristen Cavallo in Ad Age's latest "Ad Block" podcast—including how she traveled to Antarctica with her kids and the time a customer called her a "femi-nazi."

Colonel Sanders of the week: You never can predict who KFC’s newest Colonel Sanders is going to be. After a series of unexpectedly brilliant choices of actors, musicians, comedians and more, the fast-food giant has revealed that the latest Colonel is Cheetos' long-standing brand mascot Chester Cheetah. Not only that, he’s promoting an intriguing-sounding new product tie-up. As Ad Age’s Ethan Jakob Craft writes, Chester “will star in KFC’s TV ads and take the reins on the company’s social media channels to promote the new, limited-time Cheetos Sandwich, a (yes, you guessed it) fried chicken fillet on a bed of Cheetos, topped with mayonnaise and “Cheetos sauce” on a toasted bun.”