Also: After a backlash, The North Face apologizes for a marketing stunt 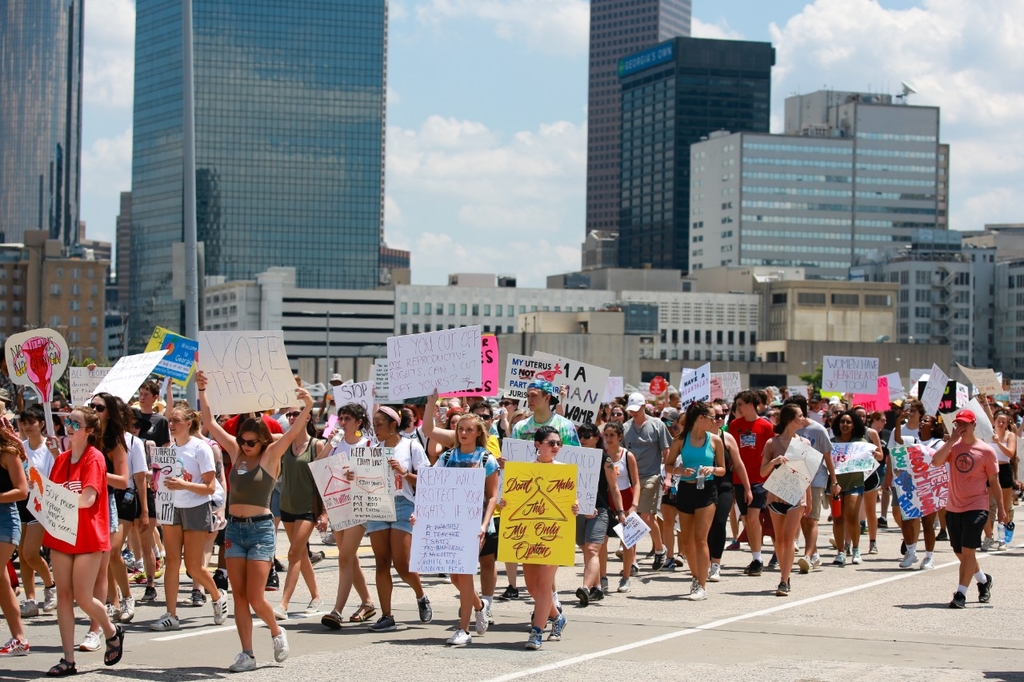 What people are talking about today
Georgia is sometimes called the “Hollywood of the South” or “Y’allywood;” everything from “Black Panther” and “Avengers: Endgame” to “Stranger Things” and “The Walking Dead” has been shot there.

Now at least nine big entertainment players say they might stop filming in Georgia if a restrictive new law on abortions goes into effect. TheWrap says Netflix, Disney, Viacom, CBS, Sony, AMC, NBCUniversal, WarnerMedia and STX Entertainment all have spoken out about the law, which is set to go into effect in 2020 and would ban abortions if a fetal heartbeat can be detected.

"Creative voices across our industry have expressed strong concern about the recently signed bill in Georgia,” a CBS spokesperson said, according to The Hollywood Reporter. “The ability to attract the best talent is the first step in producing great entertainment content and is always an important consideration in where we film any series.”

Some context: The Georgia governor’s office has said there were 455 productions shot there in the fiscal year that started in July 2017, generating about $2.7 billion in direct spending there.

Which studios so far aren’t saying anything? TheWrap cites Lionsgate and Amazon Studios, which doesn’t have anything in production in Georgia.

Sorry
The North Face acknowledges that it messed up. The brand’s Brazilian office, working with Sao Paulo’s Leo Burnett Tailor Made, hacked the Wikipedia pages for famous outdoors tourism destinations. Their stunt? They added in photos of the famous sites that showed visitors wearing gear from The North Face.

The crowdsourced online encyclopedia cried foul, saying the pages had been “unethically manipulated” and that The North Face had violated its rules. The North Face apologized, adding, “we believe deeply in Wikipedia’s mission” and saying it had ended the campaign. As Adrianne Pasquarelli writes in Ad Age, a reference to the controversy lives on in The North Face’s Wikipedia entry. What’s interesting about this: This move seemed out of character for The North Face, which is not an irreverent, stunt-prone brand. Who approved this, and at what level?

Not much of a surprise, but ...
Procter & Gamble and Saatchi & Saatchi’s Super Bowl campaign “It’s a Tide Ad” won the top honor at the 2019 Effie Awards U.S., I-Hsien Sherwood writes. Yes, that ad aired well over a year ago and has received many other prizes already, but the Effie Awards considers how campaigns impacted business effectiveness, so the campaigns being judged have often been around for a while. Read about the other winners here.

Stronger together?: USA Today publisher Gannett Co. and GateHouse Media have held talks about “a possible deal that would bring together the nation’s two largest newspaper groups by circulation,” The Wall Street Journal reports.

Cheers: “The National Football League has loosened its alcohol ad policies, including giving official sponsors the freedom to use active players in beer ads for the first time,” E.J. Schultz writes in Ad Age.

Body heat: “Under Armour’s new UA Rush fabric claims to recycle the body’s energy during performance—and the sportswear brand is putting a lot of its own marketing energy behind the product,” Ad Age's Adrianne Pasquarelli writes.  Agencies Giant Spoon and Droga5 are involved in the effort.

Bon Appétit: In case you scoffed at Condé Nast positioning itself as “the new primetime,” check out a highly entertaining video from Bon Appétit magazine, “Pastry Chef Attempts to Make Gourmet Doritos.” As Simon Dumenco writes, it’s got 4 million YouTube views in a week.

Listen: Bhavana Smith, MediaCom’s chief client officer and an Accenture alum, sees her role as building trust and transparency, and mending “the broken link between client and agency relationships.” Listen to her conversation with Ad Age Editor Brian Braiker on the Ad Lib podcast.

Headline of the day: “Someone Bought a $400,000 Diamond Ring at Costco,” from Bloomberg News.

Product of of the day: The Washington Post examines the latest supposed toy fad, something called “5 Surprise Mini Brands.” The product is a plastic sphere that contains wee replicas of common products -- there’s a mini Breyer’s ice cream, a Hellman’s mayo jar, a box of Q-Tips and so on. The whole thing seems tailor-made for unboxing videos on social media. The Post writes: “Is there anything that exemplifies late-stage capitalism better than this?” Nope.