Kraft Taps 'The Man with the Golden Voice' for Old-Spice-Style Social-Media Push
READ THIS NEXT
Quibi calls it quits, and a final presidential debate looms: Thursday Wake-Up Call 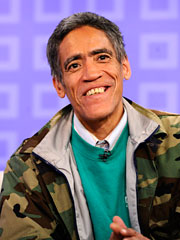 But that 's not stopping Kraft Foods from seeking a little more mileage out of its relationship with him. In a three-day Valentine's Day campaign for Macaroni & Cheese, Kraft will direct consumers to tweet love messages with the hashtag #VoiceOfLove. Mr. Williams will record personalized videos in response to some of the tweets, in which he will read back the original tweet using his golden pipes. The brand will post the videos on its YouTube channel, while tweeting a direct link to the original tweeter with link to the video. A Kraft spokesperson estimated there will be about 100 videos posted during the campaign, which runs from Feb. 12 -14.

Kraft struck up its relationship with Mr. Williams about a year ago when he became an overnight sensation after a Columbus Dispatch videographer discovered him on a highway exit ramp and shot a video of him showcasing his "God-given gift of voice." Days later, he was featured as the voiceover in Mac & Cheese ads that continue to run today. Although Mr. Williams has faded from the spotlight some, Kraft is cutting new TV ads with his voice for its ongoing "You know you love it" campaign. The newest ad will debut during the Academy Awards on Feb. 26.

Mr. Williams -- whose sobriety reportedly lapsed in early 2011 in the wake of his newfound fame -- is no longer homeless. According to a report on Time .com, he lives in a "spacious home that he shares with his girlfriend and sober living coach" that includes "a walk-in closet that doubles as a recording booth, where he records his spots for his job as the official voice of the New England Cable News."