How the Twinkie Became an American Legend

As Hostess Declares Bankruptcy, a Look Back at Key Moments in the History of One of its Most Iconic Brands
READ THIS NEXT
Walgreens to enter the primary care market with VillageMD partnership
SNACK ATTACK: Twinkies were a hit when they debuted in 1930. 'To think, [Continental Baking] didn't know if people would like them,' said Margaret Branco, one of the original 'Twinkie stuffers.'
Credit:

The end of the Twinkie? Not so fast.

Even as brand-owner Hostess Brands hurtles toward its second bankruptcy since 2004, executives pledged today to operate as normal. "Hostess has some of our industry's most powerful and resilient brands," President-CEO Brian Driscoll said in a statement. "With generations of loyal consumers, numerous iconic products and a talented and experienced workforce, Hostess Brands has tremendous inherent strengths to build upon." According to Bloomberg, the company, which also makes Wonder Bread, Ding Dongs and Ho Hos, blames legacy pension costs, restrictive work rules and the economic downturn for today's Chapter 11 filing. It emerged from the 2004 bankruptcy filing in 2009.

For Twinkie fans, today's news brings yet another moment of reflection for a brand so iconic that in 1999 then-President Bill Clinton included it in a millennium time capsule, along with artifacts such as a piece of the Berlin Wall.

Here's a look back at all the good times, beginning with Twinkie's birth more than 80 years ago:

1930: The Great Depression, and Hostess parent Continental Baking Co. is looking for an inexpensive treat to market to a penny-pinching public. Chicago-based Baker Manager James Dewar starts experimenting, injecting cakes with banana-cream filling. He decides to call them Twinkies after passing a billboard for "Twinkle Toe Shoes." The price? Two for a nickel.

1950s: The Twinkie solidifies itself as a lunch-box staple thanks in part to a partnership with "The Howdy Doody Show," on which Buffalo Bob Smith urges kids to ask their moms for the treat.

1970s: "Twinkie the Kid" is born and the boot-clad, bandana-wearing image stars in numerous commercials. Taglines include "The snacks with a snack in the middle" and "You get a big delight in every bite." In 1970, Continental begins advertising Hostess fruit pies alongside Twinkies, touting a "major nutritional advance" featuring "body-building vitamins and iron." Packages include a big "V" for vitamin fortified.

1979: When San Francisco City Supervisor Dan White was on trail for the murder of Mayor George Moscone and gay-rights activist Harvey Milk, his legal team includes what the press called the "Twinkie Defense." A psychiatrist suggests that Mr. White's diet of Twinkies, potato chips and Coca-Cola led to extreme variations in his blood-sugar levels, which exacerbated his manic depression.

1994: The buzzword "Twinkie-ization" is used to describe the rising number of consumers able to afford small luxuries in developing nations.

1996: Twinkie launches its first ad campaign in more than a decade. At agency Campbell Mithun, "Twinkie fans clamored to work on the account," Ad Age reports. "Critters" features a bear who buys a gold-colored mobile home thinking it's a Twinkie. "Hey, where's the cream filling?" he asks.

1999: President Bill Clinton puts a Twinkie in a millennium time capsule, joining a piece of the Berlin Wall, a World War II helmet and a pair of Ray Charles' sunglasses. "When it's opened in 2100, will people know what a Twinkie is ?" asks the Associated Press. More likely, the treat will be reduced to crumbs. Despite urban myths that Twinkies stay fresh forever, the company has said the snack is good only for 25 days. 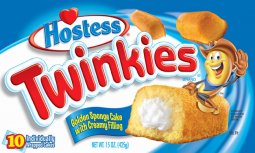 2005: Seeking to recover from its 2004 bankruptcy, Hostess (then called Interstate Bakeries Corp.) pledges new investment in marketing. The first packaging change in 25 years includes "modernizing" Twinkie the Kid. While its becoming clear that the sugary snacks run counter to prevailing health trends, "for every trend there's a counter trend, and it's a great time to exalt Hostess' nostalgic indulgence," Steven Addis, president of identity and design firm Addis Group, tells Ad Age . Also, original banana cream Twinkies are offered for a limited time in a promotion tied to the release of "King Kong."

2006: Hostess publishes the "Twinkie Cookbook" in celebration of the brand's 75h anniversary. Recipes include Twinkie Sushi, Twinkie Pancakes and a Twinkie Wedding Cake.

2010: Ad Age reports in November that Hostess grabs third place on a chart tracking social-media buzz thanks to a story about a professor shedding 27 pounds on a "Twinkie diet."