At SXSW Howard Schultz isn't worried about his brand, 'GOT' wants your blood and more: Monday Wake-Up Call

READ THIS NEXT
Lagy Gaga's Oreo collab predicts a brighter 2021, and the Super Bowl is selling out slowly: Thursday Wake-Up Call 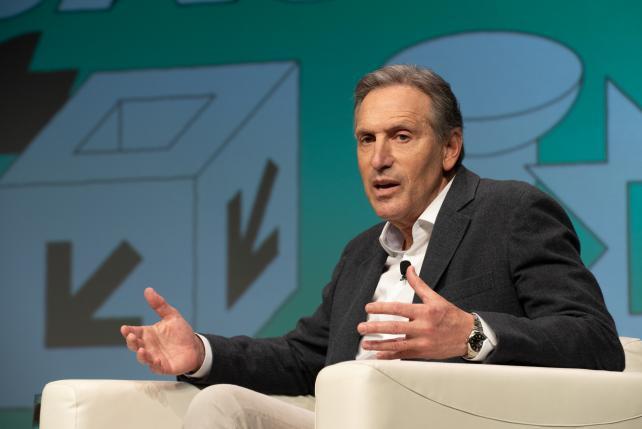 What people are talking about today
As South by Southwest treks on, in between the activations and tech talk and roller-skating parties some juicy bits were dropped, from early Facebook investor Roger McNamee saying he supports presidential candidate Elizabeth Warren's new proposal to break up Big Tech, to Warren herself proclaiming her love of Michelob Ultra, calling it "the club soda of beers."

Former Starbucks CEO and Chairman Howard Schultz, who hasn't officially confirmed he's running for president yet, also showed up to talk about his potential run on stage at SXSW this weekend. As Ad Age's Megan Graham reports from Austin, NBC's Dylan Byers "suggested Schultz's branding as a candidate is squishy as of yet, and asked what he was going to do to get people excited about him as a potential Commander in Chief."

Scultz's response: "I think if you're going to give me a little bit of credit, you have to say that over the course of the last 40 years, I know a little something about building a brand … Give me some time."

HBO wants your blood
HBO's "Game of Thrones" is known for its bloodthirstiness and at SXSW, it's literally after your blood. The show has been running an activation asking people to "bleed for the throne" in aid of the American Red Cross. AdAge's Graham explains that visitors have the option to donate blood onsite, then are asked to walk "in the shoes of those who have bled in seasons past" through a set with an audio guide." Giant Spoon worked on the installation.

"Game of Thrones" was everywhere in Austin. AdAge's Garrett Sloane reports that it was among those showcasing Snapchat's augmented reality tech, with "GOT" posters popping to animated life when seen through the Snapchat lens, and collectable pins that launch an augmented-reality fire display. Amazon and Warner Bros are among other brands using Snapchat technology at SXSW.

Grounded
After Sunday's tragic Ethiopian Airlines crash, in which there were no survivors, there's more worrying news for Boeing, maker of the 737 Max 8 aircraft that went down. This morning, China has grounded all of its 96 Boeing 737 Max 8 jets, reports The New York Times. A previous Lion Air crash in Indonesia last October also involved the same model. As the Times writes, "For Boeing, the questions go to the heart of its business, as the 737 class is a workhorse for airlines worldwide, and the single-aisle 737 Max has been the company's best-selling plane ever."

Tesla's U-turn: Tesla has reversed last month's decision to close stores and says that it will instead raise prices of by 3 percent worldwide on March 18. In a blog post, the company said it would only close about half as many stores as previously stated. There will be no price increase to the $35,000 Model 3, but the rise will apply to the more expensive variants of Model 3, as well as Model S and X.

10 p.m. revival: NBC has been revitalizing the 10 p.m. slot, known as prime-time TV's graveyard shift, with shows like "Manifest," writes Ad Age's Anthony Crupi. The network is generating more commercial ratings impressions (and ad sales dollars) in the 10 p.m. hour from Sunday through Thursday night than CBS and ABC, he reports.

Silicon monument: Silicon Valley wants to build its own iconic monument in San Jose, California, the equivalent of the Eiffel Tower or Seattle's Space Needle, reports The New York Times. Backers of the project have already raised $1 million towards it and an international design competition could be announced this spring, if San Jose City Council approves the plans.

For sale: The maker of Revlon hair dryers and Pert shampoo has put the business up for sale, reports the Wall Street Journal. The business is a division of Helen of Troy, which wants to focus on its houseware and health businesses, whose products include OXO kitchenware and Hydro Flask water bottles.

Direct-to-consumer: Want to find out more about the rise of direct-to-consumer companies, which recently shared the stage with firms like Walmart, Barneys and Lowe's at annual retail conference Shoptalk? (For a ShopTalk roundup, see Ad Age's Adrianne Pasquarelli's wrap-up here.) Then check out the upcoming Ad Age Inside Pages event on March 27. Speakers include Selena Kalvaria, VP of brand marketing at Away; Stephen Kuhl, co-founder and CEO of Burrow; Emily Heyward, co-founder and chief strategist for Red Antler; and Shane Pittson, head of marketing at Quip. Find out more here.

Campaign of the Day: How do you watch out for unconscious bias when commenting online? A Slack plug-in created by international nonprofit Catalyst promises to weed out any unconscious bias in conversations on the platform and "correct" it with positive language. As AdAge's Ann-Christine Diaz explains, if a user refers to a woman as "emotional," it will change the word to "passionate," while a term like "aggressive" will become "assertive." The idea was developed by agency Burns Group for International Women's Day: you can check out more International Women's Day work, including Mercedes-Benz's tribute to its founder's pioneering wife Bertha Benz, in Creativity's Top 5 roundup.