Two weeks into his post as VP-marketing for Hyundai Motor America, Steve Shannon scrapped a campaign that had been developed by its agency, Innocean, for the 2012 Veloster. "I thought we could do better," he said.

Mr. Shannon believed the work lacked the "connective tissue" that ties a campaign together. It included no TV spots, a crucial outreach effort for a car that Hyundai hopes will reach mass volumes. So he developed an idea of 15-second spots to capture the short attention span of Gen Y buyers that each emphasized a different feature of the car (which includes a front-seat screen to watch movies and the ability to play Xbox). 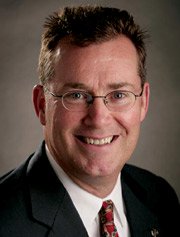 The print ads carry a singular attribute theme, with one short, catchy bullet feature per ad, such as "asphalt boom box," "uber drive" and "octane sippy car" -- words that create "more of a menu" and a "big visual that surprises you," he said. The ads, unveiled last week, represent Mr. Shannon's first substantial marketing effort at Hyundai, where he succeeded Joel Ewanick, now CMO-global marketing at General Motors.

Mr. Shannon, 53, takes the reins at a time of unprecedented sales success for the company. For the first nine months of 2011, the company sold 492,914 units, up 20% from the prior year, according to Automotive News. Hyundai said it sold 52,051 vehicles in September, 12% over the same month a year ago. And demand is outpacing supply, with a 21-day supply of vehicles on hand at Hyundai as of Sept. 1, far below the industry average of 65 to 70 days.

"Some companies might take this opportunity to take it easy, but that 's not our approach," Mr. Shannon said. At Hyundai, "it's keep your foot on the gas."

Mr. Shannon said his goal is to build on the "truth, candor and conversation" foundation that Mr. Ewanick established, while "innovating and pushing the brand forward." To that end, he's focused on creativity and concepts "that don't just support the Accent or Sonata but sell the Hyundai brand." His goal is to have potential customers check out Hyundai first, instead of being drawn to the brand because of one particular car. "Products won't always be this hot, so it's important to develop a strong Hyundai brand," he said.

One means to do that is with ads tied to the automaker's sponsorship of "Thursday Night College Football Live." The aim is to link the Korean company more to America's cultural roots through the all-important fall sport. The first of seven spots premiered Sept. 29, and are intended to show that "as college football fans are passionate about their school, Hyundai owners are passionate about their cars." Each ad will focus on a symbol of a different college.

Mr. Shannon said that Hyundai tends to be that "left-brain choice" because of its value, fuel economy and lengthy warranty. These ads aim to add an emotional connection and remind people that buying a Hyundai isn't just a rational choice, but one that comes from a passion for the brand. Football was a "great strategic connection because of the passion for the sport," he said.

With Mr. Shannon succeeding such a well-known personality at Hyundai, comparisons with Mr. Ewanick are almost inevitable. But Daniel Gorrell, president of AutoStratagem, a research and consulting company in Tustin, Calif., said it's impossible to compare the GM chief, a more "flamboyant, out-there idea guy" with Mr. Shannon, a Harvard grad with a more understated style. But he believes Mr. Shannon, who spent more than 25 years at GM, most recently as executive director of marketing for Cadillac, is "extremely bright and knows how to work with a team." Hyundai "didn't need big, new ideas. They just need stability and consistency, and he can bring that ," said Mr. Gorrell. "He can continue the momentum."

Mr. Shannon describes himself as a hands-on manager who enjoys brainstorming with his creative team at Innocean, calling himself "collaborative" and "team-oriented." He said he's been very pleased with Innocean's work so far, champions "a more disciplined approach to advertising testing," and has "amped up" the level of research in customer reaction to storyboards and finished work through focus groups and online testing. "We show more conceptual work to consumers than we did before," he said. That way "you know in advance whether you've hit one out of the park."

"It's easy to want to parse differences" between Mr. Ewanick and Mr. Shannon, said Jim Sanfilippo, Innocean's exec VP-chief operating officer. "They're very different. But both of them are fast-moving, demanding and very bright, and very consumer-focused," he said. He said there are some programs that Mr. Shannon has evaluated and liked that he's continuing (such as the trade-in-value guarantee) and other areas where "he wanted to brighten the room a little bit." In particular, he said Mr. Shannon "is very determined to have people attach themselves more emotionally to this brand," and build stories around that concept. "That's new territory for us." He said Mr. Shannon's experience working for Saturn, which was a similar consumer-focused brand, makes him well equipped to push for the brand connection in an innovative way.

Peter Sealey, CEO of marketing firm Sausalito Group, doesn't foresee significant changes under Mr. Shannon. He's "staying the course of a successful marketing effort," he said, but "sometimes the smartest thing a new CMO can do is to have the wisdom to not make changes if they are not needed."