IBM Analysis Finds the Higher the Stiletto, the Bigger the Downturn
READ THIS NEXT
Dodge pays homage to history with EV logo

After a sustained run-up, the market is headed for a plunge. The market for women's heels that is . And that may well be good news for the economy.

Historically in economic downturns heels have tended to go up and stay up, according to Trevor Davis, a consumer-products expert with IBM Global Business Services, as consumers look to compensate for dismal times with more flamboyant fashions. Certainly that 's been true during the recent downturn, he said, as it was as the flats and relatively subdued heels of the 1920s gave way to the high heels of the 1930s recession. Platform heels also soared during the recession fueled by the 1973 oil crisis. 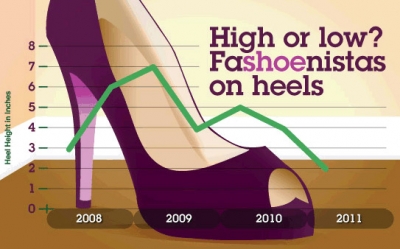 And based on IBM's analysis of social-media buzz, largely focused on fashion bloggers, women's shoe fashions are poised for a decline from their current heights.

A retrospective analysis of tweets, blog posts and other social-media mentions of heels finds they tend to be largely predictive of trends, Mr. Davis said. Ominously, the average height of heels mentioned in social media soared from 3 inches in the first half of 2008 to 6 inches in the second half, just as the U.S. financial bubble burst and women's heels were ready to head toward their current heights. Heel buzz most recently peaked in the first half of 2009 at 7 inches, bounced around at 4 to 5 inches through early 2010 and plunged to 2 inches in the most recent IBM analysis from early this year.

Online shoe mavens and bloggers "appear to be picking up these weak signals about the macroeconomic climate maybe in a way that the experts in the industry are missing," he said. At the very least, he said, they're sensitive to what shoe manufacturers and designers are planning, most recently writing about the return of the "kitten heel" and flats from Jimmy Choo and Christian Louboutin.

He believes there's also a bit of a feedback loop inasmuch as the shoe marketers keep tabs on what the bloggers write.

Or it could just be that like a housing market fueled by subprime mortgages couldn't last forever, women on 7-inch heels have been teetering on the brink of a fall. Inevitably, the "escape to fantasy" with higher heels at the outset of a recession, Mr. Davis said, becomes a bit passe.