Jay-Z Cedes Stage to Beyonce for Budweiser Made in America

Fresh off her Pepsi-guzzling ad, Beyonce is about to put in a little work for Bud. 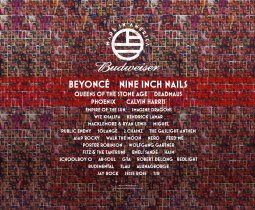 The Made in America lineup.

The pop star, who is the cola's global brand ambassador, will headline this year's "Budweiser Made in America," held for a second straight year on Labor Day weekend in Philadelphia. Beyonce will share the stage with co-headliner Nine Inch Nails. The two-day slate features a total of 36 acts, including Queens of the Stone Age, Deadmau5, Phoenix, Calvin Harris and Public Enemy.

Anheuser-Busch InBev launched the festival last year in a partnership with Jay-Z in a move to position Bud for a younger, multicultural demographic. Marketing is handled by Translation. While Jay-Z curated the festival, he is not scheduled to perform like he did last year, ceding the stage to his wife.

"If Jay-Z just performs every year it's going to get pretty boring and stale," said Paul Chibe, the brewer's VP for U.S. marketing. "So we are trying to continue to keep this thing fresh and new and push it to the next level." Of course, it wouldn't surprise anyone if Jay-Z makes his way on stage at some point.

Beyonce's participation is notable considering the cozy relationship between A-B InBev and PepsiCo, which includes joint promotions and in-store marketing. Is Pepsi is involved with the festival? Mr. Chibe said no.

Spotify partnership
Searching for some year-two buzz, the brewer announced the line-up today on Spotify, which revealed the acts one-by-one in play-list style. The reveal was supported with audio ads. Beginning tonight, Budweiser will be featured in a 24-hour takeover of the Spotify homepage. The deal comes as the music service seeks to raise its profile with a new ad campaign and new partnerships with brands.

Budweiser continues to seek a comeback in the U.S., where it has been on the decline for years. Shipments fell by 5.1% last year, which was worse than the 2011 decline of 4.6%, according to Beer Marketer's Insights. Bud is the third-largest beer brand with 7.9% share, trailing Bud Light and Coors Light, according to the trade publication. Mr. Chibe blamed last year's setback on the successful launch of Bud Light Platinum, which he suggested cannibalized Bud somewhat.

Bud has had a long history of music-themed marketing, including holding Budweiser Superfest, which between 1979 and 1999 featured acts like Aretha Franklin and Michael Jackson. Under the leadership of Mr. Chibe, Bud has ramped up its music marketing even more.

For instance, A-B InBev is backing a movie version of "Budweiser Made in America," made by Hollywood heavy-hitters Ron Howard and Brian Grazer that Mr. Chibe said is tentatively scheduled for an August release. "It's going to be very much about Jay and how Jay became a success and then how Budweiser Made in America was put on," he said.

The brewer is considering incorporating footage from the film in an ad supporting this year's event, he said. "The notion behind Budweiser Made in America is the fact that music brings walls down, it brings barriers down," he said, adding that "ethnicity and age does not predict someone's playlist." With Beyonce and Nine Inch Nails in the same line-up, he said, "you are pushing the boundaries musically."