JC Penney's marketing is entertaining consumers and building the brand, but it's not doing the "hard work" of communicating the retailer's revamped pricing strategy, said CEO Ron Johnson, during a live presentation for analysts and investors. 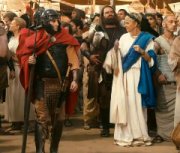 Ellen in ads for JC Penney

The fourth-largest U.S. department-store company reported a first-quarter loss of $163 million. In the year-earlier period, JC Penney reported net income of $64 million. Sales fell 20% in first-quarter 2012, to $3.15 billion, while comparable-store sales declined 18.9%. The chain also said it would discontinue its quarterly dividend.

"The transition has been tougher than anticipated, but the transformation is ahead of schedule," Mr. Johnson said during the presentation. "I don't know that we're giving up customers. Our customer is clearly buying less with fewer visits in the short term, but we want to earn her back, earn him back."

In February, JC Penney unveiled a new marketing effort. Upbeat, brightly hued commercials from Peterson Milla Hooks have been in heavy rotation, while spots from Brand Advisors, featuring Ellen DeGeneres, made their debut during the Oscars.

Many of the ads highlight JC Penney's new pricing, which Mr. Johnson has simplified into three tiers: everyday prices; monthlong values; and best prices, beginning on the first and third Friday of every month. The strategy trims promotions to 12 a year from 590.

It has been a tough sell. First-quarter traffic was down 10%, while conversion and average customer spending both fell 5%. Many customers have griped about the loss of coupons. One analyst asked company execs about Facebook comments, pointing out that about 80% appeared negative.

Mr. Johnson said JC Penney's surveys of customers and employees have yielded positive responses about the changes, though he conceded those are voluntary and conducted among buyers.

JC Penney plans to address critics and befuddled consumers with updated marketing materials. For example, Mr. Johnson said, consumers didn't understand that "monthlong values" are promotions. They also thought that "best prices" applied only to the two monthly Fridays, when in fact they're clearance prices.

Newspaper ads, such as the "Do The Math" series that began running in late March, are one example of JC Penney's efforts to convince consumers that it still has competitive prices, despite a lack of coupons. That ad details that a dress that would have been $39.99 with a discount and coupon last year costs $35 this year.

Execs indicated they would continue to use run-of -press newspaper ads to mitigate traffic declines, particularly leading into weekends.

"Coupons were a drug -- they really drove traffic," Mr. Johnson said. "We have to offset that without coupons."

President Michael Francis highlighted several merchandise initiatives. By August, he said, 47% of JC Penney's offerings will have been "transformed." The retailer plans to introduce its own label, JCP, in August, as well as collections from designers Cynthia Rowley, Betsey Johnson, Lulu Guinness and Vivienne Tam.

Mr. Francis also discussed plans to increase the presence of such brands as Puma and Nike , as well as rebuild brands such as St. John's Bay, Worthington and Stafford.

The executives also talked about plans for the Martha Stewart shop, which will be the anchor for a 20,000-square-foot neighborhood dedicated to home items. Ms. Stewart, who appeared at the event, continues to work with JC Penney rival Macy's and is locked in a legal battle with that retailer.

Jonathan Adler, Michael Graves and Bodum are among the other designers who Mr. Francis announced would have a presence in the new home space, set to launch in the first half of next year.