Ron Johnson was smiling as he took the stand Friday to testify in the trial involving Macy's, JC Penney and Martha Stewart Living Omnimedia. But over the course of nearly four hours as a Macy's attorney grilled the charismatic executive, forcing him to clarify unflattering emails and the intent of certain documents, his calm turned to aggravation.

It was the capper to a very bad week for the JC Penney CEO. Just a day earlier, JC Penney's stock shed 17% as the market reacted to sobering fourth-quarter results. On Wednesday, Mr. Johnson revealed that JC Penney sales plummeted 28% in the fourth quarter, closing out a year in which sales sunk an unprecedented 25% to $12.98 billion. That marks the lowest annual revenue the retailer has reported since at least 1987.

Words like "horrific," "atrocious," and "unprecedented" were batted around the investment community as Mr. Johnson prepared to testify in the case, which will decide whether MSLO may partner with JC Penney to produce a line of products to be showcased within shops-in-shop concepts, an issue vigorously debated given MSLO's agreement for exclusivity in certain categories with Macy's.

"After reporting another beyond-worst-case scenario quarterly result, our concern that JCP will not be able to stabilize the business has increased yet again," said Credit Suisse's Michael Exstein. "There was not one data point that could be viewed in a positive light."

A JC Penney spokeswoman declined to make Mr. Johnson available for an interview.

In light of those earnings, it's clear how critical Ms. Stewart is to JC Penney's turnaround plans, which involve a bold and ambitious vision of retail that emphasizes brands, shops-in-shop and technology over discounts and coupons. Mr. Johnson told analysts that home has been one of the "worst-performing categories in our stores for years, and in particular this past year." The category now accounts for just 10% of sales, half of what it once did. At Macy's, the home category accounts for 17% of sales. 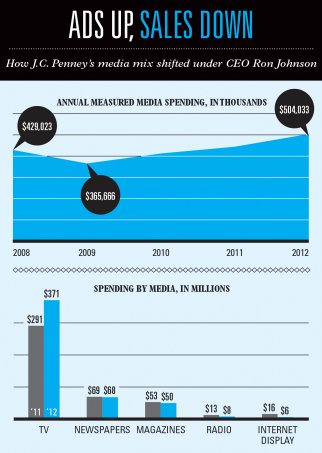 Macy's lawyer is trying to establish that Mr. Johnson and his team intentionally sought to breach MSLO's existing contract with Macy's. In an email presented in court, Mr. Johnson wrote, "Macy's deal is key. We need to find a way to break the renewal right in spring 2013." (On the stand, Mr. Johnson insisted he only meant that MSLO and Macy's needed to come to a new agreement on their contract.)

Yet, following the announcement of the deal Dec. 7, Mr. Johnson wrote to one of his directors: "We put Terry [Lundgren, Macy's CEO] in a corner. Normally when that happens and you get someone on the defensive they make bad decisions. This is good." On the stand, Mr. Johnson sought to defuse that statement, saying he only meant that, generally, people make bad decisions when stressed.

Mr. Johnson testified he would do everything the same, given the chance, including his communications -- or lack thereof -- with Macy's.

If the judge decides in favor of Macy's, JC Penney would likely be relegated to selling Martha products in categories not considered exclusive to Macy's. That leaves slim pickings. According to a lawyer for Martha Stewart, food, wine, stationery, lighting, area rugs, window blinds, closet systems, framed art and cabinets are considered fair game -- hardly a cohesive presentation for a home department meant to reinvent a flailing business.

But the chain's woes go deeper than its fighting over the domestic diva. Mr. Johnson's grand plan to reinvent JC Penney -- by abolishing sales and coupons -- has been a flop with consumers and forced the chain to bring back promotional prices in dribs and drabs.

Less than 48 hours before he took the stand, Mr. Johnson took responsibility for making some "big mistakes" in 2012. Still, he continued to embrace the double speak that's been confusing customers all along. "We have brought back coupons for our rewards members, although we still call them gifts," he said. "And we'll offer sales each and every week, as we move forward. But we will do it differently than we did in the past. We don't need to artificially mark up prices to create the illusion of savings."

Industry watchers shook their heads. "The conference call was surreal -- I would have been too mortified to appear in public," said Bernie Sosnick, an analyst at Gilford Securities. "You're getting down to a point where Penney cannot absorb many more significant losses without the damage becoming irreparable."

It's not as though the company hasn't sought to boost sales through advertising. JC Penney's measured-media spending climbed to $504 million in 2012, up from $444 million in 2011. TV advertising climbed, particularly network TV spending, while radio and internet display investments dropped. Despite Mr. Johnson's declaration late last summer that the retailer would invest heavily in newspapers, spending in that category was down slightly.

JC Penney is banking on new marketing campaigns to bring customers back into stores. And it's getting some help from an unexpected source: Sergio Zyman, the legendary Coca-Cola marketer, and at one time one of marketing's most flamboyant and highly compensated pundits and authors, is advising the campaigns, said Mr. Johnson.

In the meantime, though, it seems Mr. Johnson's terrible week isn't over: When court recessed, the attorneys weren't finished with him. He retakes the stand today.