Low-Calorie 7Up, A&W, Canada Dry, RC, Sunkist Tested in Select Markets -- and Women Are Target, Too

For soda, slim is in.

Dr Pepper Snapple Group has added five sodas -- 7Up, A&W, Canada Dry, RC and Sunkist -- to its Ten platform, which boasts 10 calories per 12-oz. serving. The sodas, now being tested in Columbus, Ohio; Des Moines, Iowa and central Pennsylvania, join Dr Pepper Ten, which launched nationally in October. The new lineup is receiving full marketing support as part of the test , including a 30-second spot from agency McGarry Bowen, plus outdoor, radio, sampling and in-store marketing. The media agency is Interpublic Group of Cos.' Initiative . 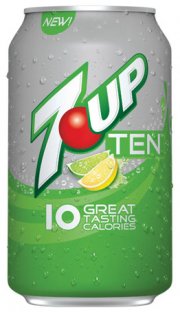 While Dr Pepper Ten was 'just for men,' 7UP Ten is gender neutral.

"The objective of bringing this platform to market is to focus on folks who are regular carbonated soft-drink users but have cut back on frequency of consumption," said Layla Vela, brand manager-7Up. "Consumption has dipped over the past few years. This is an opportunity to bring incremental business to the individual trademarks under the Ten platform. But it [also provides] great stories and news for our retail partners, so they can grow the carbonated soft-drink category and aisle as well."

Many in the industry are wondering whether so-called mid-calorie sodas, such as Dr Pepper Ten and PepsiCo Next, soon to launch nationally, could provide the boost the struggling soft-drink category needs. As consumers look to cut calories and health advocates blame the fizzy drinks for contributing to spikes in obesity and diabetes, soda marketers are looking for ways to attract lapsed users. Earlier efforts in the mid-calorie space, such as Pepsi XL in the mid-1990s and C2 and Pepsi Edge, launched in 2004, flopped. But some believe now is the time for this in-between category.

"There exists pent-up demand for better-tasting lower-calorie products," wrote Bill Pecoriello, CEO of Consumer Edge Research, in a report on the topic. "Our research suggests that a mid-calorie cola could drive incremental volume for carbonated soft drinks, as interest levels were highest among weekly consumers of energy drinks, enhanced and flavored water, ready-to-drink tea, sports drinks and juice drinks."

But mid-calorie sodas do present a marketing challenge. While the propositions of "regular" and "diet" are well understood, it gets murkier with mid-calorie products. Consumers have already had to adjust to the idea of Pepsi Max, "Zero Calories, Maximum Pepsi Taste" and Coke Zero, "Real Coca-Cola Taste, and Zero Calories." These types of in-between products require marketers to further educate the consumer.

The updated roster of Ten products target men and women ages 25 to 49, unlike Dr Pepper Ten, which was created for 25- to 34-year-old men who prefer regular Dr Pepper but want fewer calories. Dr Pepper Ten, which is targeting a market similar to Pepsi Max and Coke Zero, has received some flak for its marketing, which carries the tagline "It's Not for Women."

The new Ten spot, which highlights 7Up but refers to all of the new brands in the closing shot, features a humorous message about compromise. A couple is shown hopping into a pink monster truck and watching a cooking show where the host is tackled by a football player. "Great Taste, 10 Calories, Get Both," a voice-over declares.

Ms. Vela said because the demographic profiles for the trademarks now launching Ten products are roughly split between men and women, it made sense to target both groups. She said it was not in response to critics who called Dr Pepper Ten advertising sexist. In fact, a new Dr Pepper Ten campaign, bearing the same "It's Not for Women" tagline, is being prepped for the second quarter, a spokesman said.

The test is slated to last through midyear, at which point the company will decide whether to roll out the products nationally. Ms. Vela said reactions from retailers and bottling partners have been good.

"We're doing the best we can to replicate the equivalent of a national launch at the local level," said Ms. Vela. "It's in our best interest to do what we can to make sure we're getting the most robust learning out of the test markets. We want to understand what media vehicles work best and how we should activate at retail."

During the Dr Pepper Ten test a year ago, the brand achieved a 6% share of the overall trademark, while sales of regular Dr Pepper and Diet Dr Pepper grew, according to Ali Dibadj, an analyst with Bernstein Research. In the first two months of the national launch, Dr Pepper Ten captured about 0.5 of the carbonated soft-drink category, according to Consumer Edge Research, but its share dropped to 0.34 in December.

"It's early days to measure Dr Pepper Ten's success. It's off to a slow start, and key will be watching the trial and repeat build in the months ahead," Mr. Pecoriello said.

John Sicher, editor and publisher of Beverage Digest, said it's not unusual for new brands to perform "erratically" following a national launch. Coke Zero, one of the most successful launches in Coca-Cola's history, also had spotty performance in the first few months after its introduction, Mr. Sicher pointed out.