Nearly every kids meal offered by top restaurant chains just got an F in nutrition. 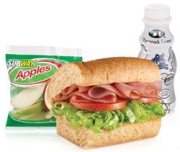 That's according to the Center for Science in the Public Interest, an consumer advocacy group that said that 97% of kids meals at top U.S. restaurant chains do not meet its nutritional criteria. The only chain that passes? Subway, for its Fresh Fit for Kids meal combos, all of which met CSPI's criteria.

"These chains are stuck in a time warp from a time when eating out was a rare occasion," said Margo Wootan, nutrition policy director at CSPI. Kids meals, she said, have become a bigger problem because "now families rely on restaurants to feed themselves and kids more" than they did before.

"Our goal has always been to provide the most nutritious, balanced kids meals in the industry," said Lanette Kovachi, corporate dietician for Subway in a statement. "As a mom and a dietician I know that it's not easy to get kids to eat things that taste great and include essential nutrients. Our menu can make both parent and child happy."

The study comes out the same day that Yum Brands' KFC launched its new kids-meal platform, Li'l Bucket Kids Meals, which come with choice of chicken, side (green beans, mac and cheese or mashed potatoes), applesauce and a drink. A meal that includes, for instance, grilled chicken, green beans, applesauce and a Capri Sun Roarin' Water has 210 calories, 4 grams of fat and 565 mg of sodium, according to a press release. Choosing fried chicken or mac and cheese will invariably up the calories and fat, though it's unclear by how much.

CSPI looked at the top 50 chains in the U.S. by sales, which would include McDonald's, Wendy's, Burger King, Chili's, Olive Garden and TGI Fridays, but of those 50, only 41 had kids' menus. CSPI audited the nutritional information based on what companies provide it publicly, so only 34 total had enough publicly shared information to judge the kids' meals.

To meet CSPI's nutrition standards, kids' meals must not exceed 430 calories, must not have more than 35% of calories from fat, or more than 10% of calories from saturated plus trans-fat; they cannot have more than 35% added sugars by weight or more than 770 milligrams of sodium. Meals also must have at least a half a serving of a fruit or vegetable, including an item that has 51% or more whole grain, or including specified levels of vitamins or fiber.

CSPI's criteria exclude sugar drinks in favor of water, juice, or low-fat milk. Despite CSPI's criticism, there has been some improvement in kids' meals. In 2008, 1% of kids' meals met the group's standards, compared to 3% in 2012.

The issue of kids' meals has been a heated debate in recent years, growing to the point that chains such as McDonald's revamped its kids' meals in September 2011 and the National Restaurant Association launched its voluntary KidsLiveWell initiative, which requires that participating chains offer one healthy kids' meal option. The Happy Meal now automatically includes a quarter cup of apple slices and a smaller-size french fries (1.1 ounces), along with the choice of a hamburger, cheeseburger or Chicken McNuggets. The meal did not meet CSPI's criteria, in part because soda is still a beverage choice, though McDonald's now offers fat-free chocolate milk and 1% low-fat milk.

Consumer advocate groups like CSPI have long railed against kids meals, arguing that the meal is in and of itself is a marketing tool. "One of my biggest concerns about kids meals is that they're a major form of marketing, supported by television advertising, websites and other promotions," said Ms. Wootan. "Marketing and kids' menus helps to cultivate a view by kids that that's not only what they want to eat, but what they should eat. ... I'm not saying parents don't have a role to play. But I'm tired of the restaurants saying it's all the parents faults, when they're spending millions promoting food that undermines our children's' health."

CSPI also looked at the NRA's nutritional standards specified in its KidsLiveWell program, concluding that 91% of kids' meals at major chains do not meet the lobbying group's criteria. Any chain that participates in the KidsLiveWell program must meet the NRA's criteria for one kids' meal, so the 91% failure rate CSPI noted is based on looking at meals at chains that are part of the program as well as those that are not.

At 19 chains surveyed by CSPI, including Chipotle, Popeye's and Hardee's, not one combination of the items offered for kids met CSPI's criteria, and only nine chains met the National Restaurant Association's criteria. The NRA said that its KidsLiveWell initiative has driven chains to offer a healthy kids' option at nearly 40,000 locations nationwide. The program launched about 18 months ago with 19 participating restaurants and has grown to include more than 120 restaurant brands.

CSPI said it supports the NRA's KidsLiveWell effort and encourages chains to join it, though Ms. Wootan said that to further improve the program, the NRA should ask chains to offer more than one healthy kids option.

CSPI pointed out some of the biggest offenders of its criteria, which include:

Applebee's Grilled Cheese on Sourdough with French Fries and 2% Chocolate Milk has 1,210 calories with 62 grams of total fat, 21 grams of saturated fat and 2,340 milligrams of sodium. CSPI said that this meal has nearly three times as many calories, and three times as much sodium, as CSPI's criteria allow.

Denny's Jr. Cheeseburger and French Fries has 980 calories, 55 grams of total fat, 20 grams of saturated fat and 1,110 mg of sodium. Denny's does not include beverages with kids' meals.

Ruby Tuesday's Mac & Cheese, Cheddar Mashed Potatoes, and Fruit Punch has 865 calories, 46 grams of total fat and 1,752 mg of sodium. Ruby Tuesday's does not disclose saturated or trans-fat content on its menus or website.