Declaring that "great marketing is back at Kraft," the food giant today said it will boost spending on key brands and new products as it seeks grocery profits in the face of commodity inflation and sluggish economic trends. And if its latest moves are any indication, the marketer will be taking an unconventional approach. 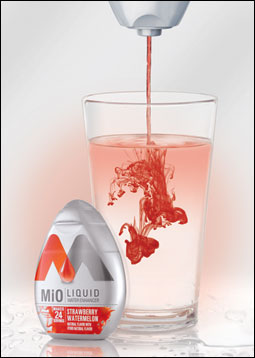 A campaign for Miracle Whip called "We're Not For Everyone" seeks to build curiosity by highlighting the brand's polarizing nature, including anti-endorsements from celebrities such as "Jersey Shore's" Pauly D, who says in one ad that "I would never eat it, I would never put it in my hair. It's just wrong."

At the same time, Kraft Foods is launching its first new brand in 15 years with "Mio" -- first-of-its-kind flavoring packs that are squeezed into water and don't require stirring or mixing.

The efforts are part of Kraft's strategy to reinvest more of its profits in innovation and marketing, even as input costs rise and consumer-packaged-food companies battle for price-conscious consumers. New-product development will jump to 10% of net revenue by 2013 from 8% in 2010, while Kraft plans to boost advertising spending on core brands from 7% to near 10% of revenue, executives told Wall Street analysts here at the annual meeting of the Consumer Analyst Group of New York, or CAGNY.

"It is a simple formula, great brands with strong messaging, supported by competitive advertising will grow at benchmark and we're seeing that result on many of our brands with more to come," said Tony Vernon, president-Kraft Foods North America, noting that Kraft has or will unveil campaigns for its 20 power brands, including Planters, Oreo and Macaroni & Cheese. As Ad Age recently detailed, the food maker is demanding cutting-edge creative from its agencies, and is unafraid to break ties when it is not satisfied.

One of the big agency winners is Dentu's McGarryBowen, which will handle Mio, one of several Kraft accounts the agency has won in the last couple of years. The firm is also the agency for Miracle Whip and is behind the campaign, which builds on the brand's positioning to younger adults begun in 2009 that has featured comparisons to "boring" regular mayonnaise. The new ads include actors and celebrities who were cast for their "undying passion for, or against, the condiment." While Pauly D bashes it, cable news star and Democratic political consultant James Carville declares his love, saying "Miracle Whip is America." And then there's actress Amy Sedaris, who says: "It's always great in the bedroom."

"We're going where no Kraft brand has gone before," Justin Parnell, Miracle Whip's senior brand manager, told Ad Age. "We're trying to peak the curiosity of those that have never tried Miracle Whip to decide what side they are on." The spots will air during Wednesday's "American Idol" episode, as well as during the Oscar's preshow broadcast.

Mio, Italian for "mine," is targeted at 18- to 39-year-olds who want to "personalize whatever and wherever they can." The portable flavoring pods contain 1.62 fluid ounces for $3.99 -- enough for 24 servings -- and come in six sugar-free flavors such as berry pomegranate and mango peach. Consumers are told they can add a little or a lot, by flipping a cap open, and squeezing the flavor in water. Mio will hit stores at the end of March, and will be plugged with TV ads and a Facebook page, where 100,000 samples will be offered. Kraft is not bashful about its goal, saying the brand "represents the way people will drink water in the future."