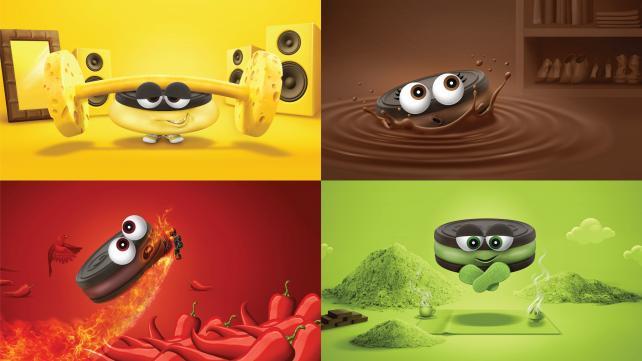 The company, formed in 2015 out of the merger of two food giants, just launched its first cookie brand, and it was created for China. The brand name is Kraft Jif Jaf, the mascots are quirky personified cookies with big eyes, and the products include wafers and chocolate sandwich cookies with fillings in unusual flavors like matcha tea, chili and cheese. (Cheese-and-chocolate sounds weirder than it is: Ad Age did a taste test, and the filling is overpowered by the chocolate biscuit. There's a faint cheesy tang when you sniff it, though.)

So was Kraft Heinz thinking about Oreo (and maybe feeling its absence) as it created this new product?

"We are not here to compete with a single brand in particular -- there are many sandwich cookies in the market today," says Roshni Chatterjee, head of white space innovations for Asia-Pacific at Kraft Heinz. "It's not only about sandwich biscuits, it's about snacking, which is the competition."

That said, the company knew there was untapped potential for Kraft in the cookie category in China. The Kraft name has high awareness in China, and research showed that many Chinese consumers still spontaneously associate Kraft with cookies, years after its cookie business departed with Mondelez. "It definitely was a category of choice for us to participate in," Chatterjee says.

The value of the Chinese market for biscuits and cookies grew at a compound annual growth rate of 8.4 percent between 2011 and 2016, hitting $10.2 billion that year, according to Mintel data. Mondelez is the biggest player in the segment in China, with a 10.6 percent share by value in the first six months of 2016, the most recent data available, though it has lost some ground to local players.

Kraft Heinz, meanwhile, had global sales growth of 0.3 percent to $6.88 billion in the most recent quarter, with sales falling 1.1 percent in the U.S. That may be a reason to look for untapped opportunities in China.

A brand that 'embraces its oddities'
Enter Jif Jaf, which launched in a strategic partnership with Alibaba Group's Tmall e-commerce platform. The brand is called Quzu in Mandarin (pronounced chew-zoo), which means "interesting clan." It's a reference to a Chinese expression about beauty being common, while interesting souls are rare. 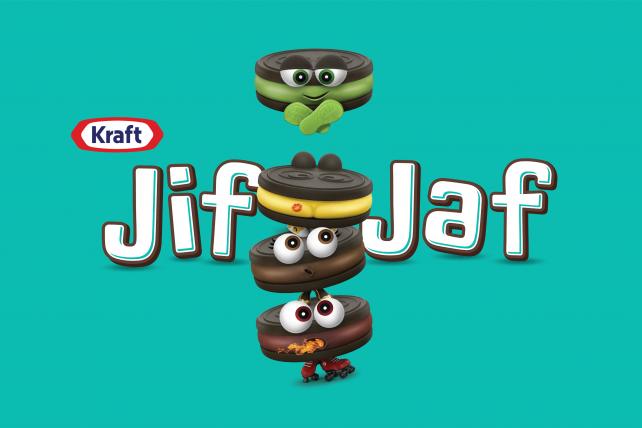 The Singapore office of independent creative agency Jones Knowles Ritchie, or JKR, helped develop the brand over 12 months. The team felt that using personified cookie characters for the packages and marketing would help Jif Jaf stand out in a competitive category.

Most similar brands in China "have a very loud, brash logo on the pack, most have a little product shot in the bottom right-hand corner, and somewhere there's a photograph of delicious-looking ingredients," says JKR Strategy Director Katie Ewer. "It's almost like coloring by numbers, it's very formulaic."

Like the different colors of M&Ms. each Jif Jaf character has its own personality. The matcha character is chilled-out, chili is an "adrenaline junkie," and the cheese character is a ladies' man. ("He's someone as irresistible as cheese is," Ewer says.)

JKR's campaign includes videos, influencer endorsements, out-of-home and social engagement under the launch headline "discover deliciously different." Why the unusual fillings and the brand message? The team says young adults in China (and elsewhere) are torn between a desire to fit in and to stand out. Ewer says, "We wanted to create a brand that encouraged people to authentically accept who they are and embrace their oddities."