How Kraft Will Market Its Grocery Business After the Split

Kraft Foods CEO Irene Rosenfeld signaled today that the food giant will continue to aggressively market its North American grocery brands, even after the business is severed from its faster-growing global snacks unit in a split planned for the end of next year.

"If you believe that there is a new normal of slower consumption growth in North America -- and we do -- certain capabilities will be even more important in the future," Ms. Rosenfeld told analysts at Barclays Capital's Back-to-School Consumer Conference. "Things like stronger share position, world-class marketing, go-to-market scale and low-cost producer status will become even more critical in the future."

While nothing will be known for sure until the company divides, Ms. Rosenfeld's comments offer at least some comfort to ad agencies working on the grocery business that the food giant is not giving up on the brands, which have been overshadowed by the faster-growing snacks unit ever since the company made its plan public last month. Dentsu's McGarryBowen handles a big chunk of the grocery brands, including Maxwell House and Oscar Mayer, while a plethora of agencies steer the global snacks brands.

In a 45-minute presentation, Ms. Rosenfeld offered her most public -- and extensive -- defense yet of the planned split, which took the industry by surprise when announced in early August. "Simply put, we've now reached the point where North American grocery and global snacks would each benefit from standing on its own and focusing on its unique drivers of success," Ms. Rosenfeld said.

While Kraft defended its split, PepsiCo -- which also presented at the conference -- went out of its way to explain why its scale makes sense, seemingly deflecting speculation that it would be the next big company to break up by separating its snacks and beverage businesses. "Rest assured, Power of One remains a competitive advantage for us," said John Compton, CEO of PepsiCo Americas Foods, referring to the company's strategy of jointly promoting both businesses in stores. He cited recent moves, for example, to jointly promote Frito-Lay's natural lineup along with Sierra Mist Natural, as well as bundling Doritos with Pepsi Max promotions.

Kraft's plan would create two publicly traded companies: a $32 billion international snacks business, including Cadbury, Oreo and Trident brands, and a $16 billion North American grocery business, which will include Kraft Macaroni & Cheese, Oscar Mayer, Philadelphia, Maxwell House, Jell-O and other non-snack brands. The split marks a reversal of sorts for Ms. Rosenfeld, who once touted the company's massive scale, especially in light of last year's acquisition of global candy giant Cadbury. But during her presentation today, Ms. Rosenfeld suggested that it was the acquisition that enabled the company to divide in two by giving the snacks business enough scale to stand on its own. 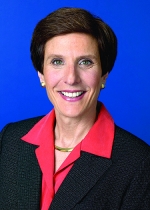 The global snacks business will be home to the company's superstar brands such as Oreo, and will have a total of eight billion-dollar brands, deriving 42% of its revenue in developing markets, which are a brighter source of growth for food marketers than struggling mature markets such as the U.S. The grocery business, by contrast, will be home to half as many billion-dollar brands -- Maxwell House, Oscar Mayer, Kraft brand and Philadelphia -- which are mostly commodity products that are not suited for international growth. Still, Ms. Rosenfeld took pains to tout the grocery business, saying it will "continue to be one of the largest and most admired food companies in North America. In fact, it will be No. 3 in size, behind Nestle and PepsiCo."

As a standalone, the grocery business would "be a pure play as a lean, mean, center-of -the-store machine in the most profitable market in the world," she said. The business will "leverage its category-leading market position and continue to deploy its capabilities in innovation and marketing, while focusing single-mindedly on warehouse distribution and sales efficiency."

Of course, the proof will be in the (Jell-O) pudding on how much marketing investment the new standalone grocery business actually makes. Indeed, key decisions will be made by a new executive team that Kraft has not yet named. And to be sure, there will be an intense focus on cost. Ms. Rosenfeld said the goal is to "deliver negative overhead growth" generating free cash flow that "can be returned to shareholders in the form of a highly competitive dividend payout and a growing dividend over time."

The next steps in the split are to get a tax ruling from the IRS by early second quarter and make some financial filings shortly after, Ms. Rosenfeld said.