What's on Lafley's List This Time Around at P&G

Everything old is new again at Procter & Gamble Co., as A.G. Lafley steps in for the man who replaced him as CEO in a bounceback unprecedented for the packaged-goods giant but increasingly common elsewhere.

And P&G is making clear it's not expecting big shifts to come: "This won't result in a dramatic change in our strategies or our priorities," said P&G Chief Financial Officer Jon Moeller in a brief listen-only call with investors May 24.

That didn't stop investors from feasting on the helping of executive comfort food, sending P&G's stock up 4% on Friday amid a flat market ahead of a holiday weekend. UBS upgraded the stock and other analysts applauded the move. Citi analyst Wendy Nicholson even called for Mr. Lafley to "bring back the band" and return more P&G alumni to the company.

In some ways it's already like the past four years didn't happen. Mr. Lafley returns to many of the same questions he faced before Bob McDonald took over in 2009. Among them: How can a company that sells mainly premium products keep growing in a weak economy? How can P&G preserve its highly profitable business in the U.S. while aggressively pursuing faster-growing developing markets? Is there anything big left in the innovation pipeline? When will the beauty business -- Mr. Lafley's focus during his first tour of duty -- stop losing ground to competitors? And who's in line to replace Mr. Lafley, soon to turn 66 and not expected to stay more than two or three years this time?

It's not entirely clear P&G has answers to those questions any more than when Mr. Lafley stepped down the first time. 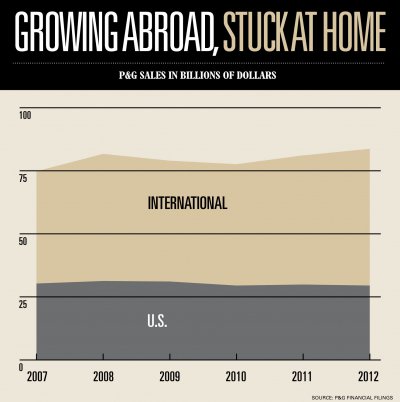 While P&G has posted big growth in markets such as Brazil and India during the past four years, U.S. sales have barely changed. (Domestic revenue was 5% lower last year than when Mr. Lafley left.) P&G's U.S. market shares have rebounded in most categories of late amid price cuts and increased reliance on value-priced offerings. P&G did recently post its first gain since February 2011 in cumulative U.S. market share in all its categories for the four weeks ended May 11, according to Nielsen data from Sanford C. Bernstein. But that gain was only 0.02% -- i.e., virtually unchanged.

It's tough to find policy differences between Mr. Lafley and Mr. McDonald. Some see focus shifting from developing to developed markets, but Mr. Lafley actually concentrated more on emerging markets than his predecessor, Durk Jager, if less than his successor, Mr. McDonald.

Plus, he signed off on many of Mr. McDonald's plans four years ago. And unlike Mr. McDonald, Mr. Lafley entered the job with a fresh pipeline of new developed-world-focused brands such as Febreze, Swiffer and more upscale "masstige" versions of Olay to draw upon.

While Mr. McDonald never directly criticized the man he called his "friend and mentor" in his farewell memo, he made plain repeatedly in recent years that he inherited an innovation cupboard that was relatively bare, and had stepped up work to cultivate the breakthrough products he promised would emerge as soon as this year. That remains a show-me story.

That said, Mr. Lafley could be walking into a fortuitous situation because of some of the tough work done by a predecessor, as was the case his first time as chief executive, people close to P&G say.

Mr. Jager left behind an innovation supply that served P&G well for years, despite problems due in part to what Mr. Lafley in 2000 described as doing "too much too fast." Similarly, P&G could benefit down the road from Mr. McDonald's costly expansion into developed markets occupied by entrenched foes.

If those bets pay off, Mr. Lafley could prove doubly lucky by twice inheriting tailwinds while facing headwinds of criticism.

Mr. Lafley's return creates new doubts about succession planning at a company that once prided itself on orderly transitions and grooming enough leaders to provide for itself and much of the rest of corporate America. P&G said Mr. Lafley would participate in "an ongoing succession process," but it is obvious that no internal candidate has been found. By turning to Mr. Lafley, the board effectively determined the two current vice chairs, Dimitri Panayatopoulos and Werner Geissler, weren't up to the job. Two other top candidates, Group President North-America Melanie Healey and Group President-Global Beauty Deb Henretta, have their hands full with two of the company's biggest issues: the slow-growing U.S. business and Olay skin-care, which was P&G's biggest top-line problem last quarter, when beauty organic sales slid 1% globally.

The departure of several senior executives in recent years points to a reluctance to identify a leading contender. Among the brain drain were two younger vice chairs, Rob Steele and current Bacardi CEO Ed Shirley. Others who left included Levi Strauss & Co. CEO Chip Bergh and Sephora CEO Christopher De La Puente. In each case, it was pretty apparent the executives weren't going to get the CEO post. And while P&G has brought candidates back to their old jobs in the past, the company has never promoted outsiders to senior titles they didn't have before.

"To elevate someone internally, you really would have had to go with somebody who might have been too green," said Sanford C. Bernstein analyst Ali Dibadj. "A lot of very senior people who could have been qualified left. You needed change, a known entity, someone with cultural experience."

There's been discussion that Mr. Lafley might assemble a team that has P&G experience. "Free agents" Mr. Steele and former President-Global Business Units Susan Arnold are possibilities, but were passed over by the board this time and would have little incentive to return unless guaranteed a shot at the top job.

This latest move, though, raises some eyebrows over the logic of reinstalling a shepherd of the "old guard," who presided over many of the problems still being addressed today. Even so, Mr. Lafley comes with a reputation for having led P&G during a major turnaround and for several years of its strongest performance since the 1980s. And as a communicator, he inspires more confidence and has much clearer messages than Mr. McDonald.

"Everyone internally and externally thinks he's a great CEO and a smart man, and if he's engaged in fixing P&G, we think it can happen," Mr. Dibadj said, noting that "being out of the game often makes you want to come back to the game."

Even though he appears to be coming back to the same problems at P&G, Mr. Lafley has experienced a lot of personal change over the past four years. He moved to New York from Cincinnati, remarried and started a new career in private equity, all suggesting he never lobbied for the job and will likely be well compensated for his return, said Deutsche Bank analyst William Schmitz.

Former P&G Global Marketing Officer Jim Stengel said he doesn't see changes to P&G's marketing approach. Mr. Lafley "was always very empowering" when it came to letting marketers make their own decisions about agencies, assignments and compensation, Mr. Stengel said. "He has a lot of friends in the agency business who will rally around him."

Rather, he expects Mr. Lafley to focus on decision making, "which everyone wants to be faster."

Additionally, Mr. Stengel expects shakeup in P&G's senior ranks, based on changes Mr. Lafley made the first time around and the fact that some senior leaders are "long in the tooth."

Messrs. Lafley and McDonald were vastly different in style. Mr. Lafley was known for focused, easy-to-grasp messages like "the consumer is boss," which has already returned, and "collaborate internally and compete externally," something that more often than not fell by the wayside in recent years.

Mr. Lafley was more widely liked inside and outside the company, particularly by his colleagues from his days in the laundry business, according to people familiar with the matter.

Mr. McDonald, while also well-liked, particularly for his tireless community involvement and willingness to mentor people, tended to do better in one-on-one informal settings than with groups or under tough questioning. He ultimately rubbed many people inside and outside the company the wrong way with his "purpose" and "touching more lives, more often in more places" mantras.

Mr. Lafley's focus on making hard choices, outlined in his recent book, "Playing to Win," was perhaps the sharpest contrast to what some analysts saw as Mr. McDonald trying to attack developed markets on all fronts simultaneously, ultimately taking painful losses from competitive countermeasures in the U.S.